Catherine, Duchess of Cambridge, stepped out in a chic red shift dress after giving birth to her third child, a baby boy.

Kate Middleton, who’s known for her polished and sophisticated sense of style, sported the cherry red dress by designer Jenny Packham, which featured a white lace eyelet Peter Pan collar, while stepping out of the Lindo Wing of St. Mary’s Hospital in London on Monday. Middleton and Prince William welcomed the baby boy on April 23, adding a third child to their royal brood; their son Prince George was born in 2013, while their daughter Princess Charlotte was joined them two years later in 2015.

This isn’t the first time that Middleton made headlines wearing Jenny Packham; she was widely applauded for her selection of a blue polka dot Jenny Peckham dress she wore when introducing Prince George to the world, not only because it was considered an homage to Princess Diana’s polka dot dress after Prince William was born, but also because the dress showed off Middleton’s post-pregnancy baby bump.

Middleton paired her springy dress with a pair of low nude suede pumps from Gianvito Rossi, which are still available to buy for $675 while her baby boy wore a white baby hat and was wrapped in a white swaddle. Twitter users were quick to point out that her look paralleled that of Princess Diana’s when she exited the hospital after giving birth to her second son, Harry, just as Middleton had also given birth to her second son.

Twitter users also believe that the red dress – with white detailing – may have been in honor of St. George’s Day today, meaning that the newest royal baby will share his birthday with the important British holiday, which honors the country’s patron saint.

The baby boy’s arrival is just one of many exciting life events for the royal family this spring; in May, Prince Harry will marry Meghan Markle on May 19 in what’s sure to be a royal wedding to remember. 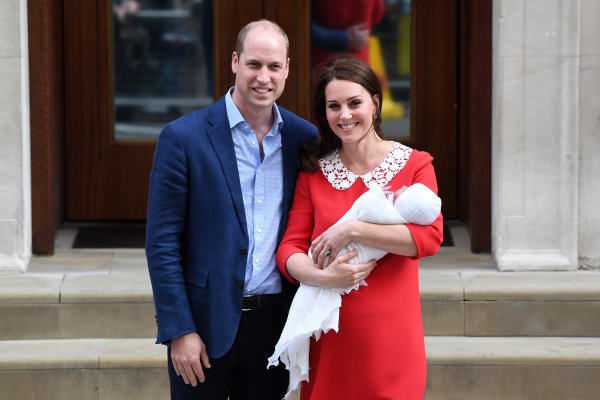 Why the New Royal Baby Might Have a Big Advantage in Life
Next Up: Editor's Pick