Will the Trump-Kim Talks Solve the North Korea Problem? 5 Things to Remember

There was big news from the Korean peninsula earlier this week as Kim Jong-un had an “openhearted talk” with South Korean envoys in Pyongyang. But it was overshadowed with even bigger news out of the White House last night, as President Trump agreed to meet with the North Korean leader in May.

But how excited should we really get about the prospects of a diplomatic breakthrough with Pyongyang? Here are five things to keep in mind:

Kim Jong-un’s Olympic détente—a remarkable (if largely symbolic) climbdown—caught most everyone by surprise. But in South Korean President Moon Jae-In, Kim finally has a counterpart not only willing to engage with Pyongyang, but one who made doing so a plank of his campaign platform. A former human rights lawyer (and special forces soldier), Moon has staked much of his political reputation on ratcheting down tensions on the Korean peninsula. Moon may well represent Kim’s best chance to negotiate with a South Korean leader in good faith.

Earlier this week, North and South Korea agreed to hold a summit between Kim and Moon in late April. In the ru-up to the Koreas summit, Moon and Kim will have a hotline installed so they can discuss issues directly. Kim also signaled he was willing to discuss North Korea’s denuclearization and a pause in weapons testing in exchange for the possibility of normalizing relations with the U.S.—an invitation Donald Trump accepted just last night. North Korea clearly wants to talk; that alone provides reason to be hopeful. And while it’s true that previous North Korean overtures have fallen flat in the past, none of those were under Kim.

Kim’s sudden change of heart didn’t come out of nowhere—Beijing has been turning the screws on Pyongyang lately by actually enforcing international sanctions against the Kim regime, another positive sign that talks may prove fruitful this go-round. Without China and its food and energy exports (China makes up 90 percent of North Korea’s trade volume), the isolated Hermit Kingdom would collapse in short order. Pyongyang’s provocative nuclear and missile testing may have pushed its adversaries to the negotiating table, but it’s also unnerved Beijing, the one indispensable ally Pyongyang has.

Why? North Korea’s provocations have resulted in increased U.S. military activity in China’s Asian backyard, and spurred perennial foes Japan and South Korea to enhance their own military capabilities to deter Pyongyang. Chinese businesses and banks have been hit by sanctions targeting North Korea. China’s inability to keep North Korea in check has also damaged its credibility in the eyes of its neighbors as well as the world community at large. And now that China is gunning to take the global leadership mantle from the US, that reputation is more important to Beijing than ever.

Determined not to be left behind, a Chinese state-run paper ran an editorial this week declaring that the Korean issue cannot be solved without the participation of China (in addition to Russia and the UN Security Council). They’re not wrong. But the mere fact that Chinese media acknowledges it is a heartening sign of a more engaged Beijing.

Reason to worry#1: North Korea won’t easily give up its deterrent

The flipside to all this is that talk of summitry and potential breakthroughs may simply be a ruse to buy North Korea more time. At the end of the day, Kim has one goal—stay in power (and relatedly, alive). The whole point of developing nuclear weapons was to prevent the type of regime change that felled the likes of Saddam Hussein and Muammar Gaddafi, strongmen without the protection of a nuclear arsenal to scare away enemies.

While North Korea has ostensibly vowed to stop its weapons testing should talks with South Korea and the U.S. progress, that promise doesn’t prevent it from refining the technical aspects that may be needed to make those weapons more accurate and potent down the line. And there’s always the risk that North Korea interprets its newfound respect as reward for its brazen (and still illegal) pursuit of nuclear weapons.

If Pyongyang sees its nuclear capabilities as the primary reason it’s now commanding respect from previously-hostile countries, it’s difficult to imagine they would willingly surrender them.

Reason to worry #2: South Korea wants its own talks with the North

Also a worrying sign: South Korea has effectively created its own dialogue track with North Korea, separate from the U.S. That’s understandable given Donald Trump’s erratic policy swings, but it also highlights a real concern: any sustainable resolution between North and South Korea will ultimately need buy-in from Washington.

Let’s be fair—Donald Trump’s confrontational approach to North Korea, at one point even threatening to rain down “fire and fury” on the Kim regime, has played an enormous role in pushing Beijing to lean on Pyongyang, and has helped force North Korea to the negotiating table.

But as we saw from Trump’s recent announcement on steel and aluminum tariffs, this president has a penchant for making international policy decisions in response to political developments at home. And now that Trump has directly entered the negotiation process, the uncertainty factor spikes dramatically. That won’t keep South Korea and Moon from pushing for a breakthrough—they’ll just have to cross the Trump bridge when (and if) they get to it.

Conclusion: The stakes are higher than ever

So where does this leave us? To put it bluntly, there’s now a higher chance of diplomatic breakthrough, but also a higher chance of war if these talks breakdown. South Korean officials expect that Trump and Kim will meet by May; that’s a long time from now, and you better believe there will be plenty of Trump tweets in between. Either way, we’re getting closer to the end game. 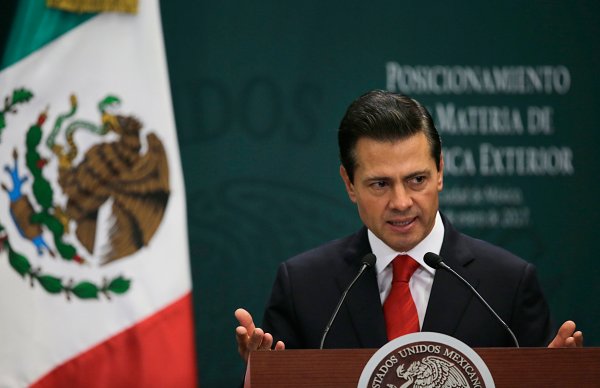 5 Politicos With Questionable Academic Credentials
Next Up: Editor's Pick