Trump Told a Steelworker His Father Was Looking Down on Him Proudly. One Small Correction: 'He's Still Alive'

The devil is in the detail.

The President told a steelworker that his father was looking down on him with pride. It was a lovely sentiment except for one thing. The dad’s still alive and kicking.

The light exchange that lit up the internet happened at Thursday’s White House event ahead of Trump’s announced steep tariffs on steel and aluminum imports, a landmark campaign promise.

The steep tariffs are great news to Scott Sauritch, the president of the 2227 steelworkers union in West Mifflin, Pennsylvania, who explained why Trump’s move meant so much to him with a story about his dad in the ’80s.

“He lost his job due to imports coming into this country,” Sauritch told Trump wistfully, offering POTUS his sincere gratitude. “I just wanted to tell you, what that does to a man with six kids is devastating. I never forgot that, looking into his eyes in my household [and] what that does to a family.”

“Well, your father Herman is looking down. He’s very proud of you right now,” Trump said.

“He is?” Trump asked. “Well then, he’s even more proud of you,” he said, as laughs rippled throughout the room.

Alive? Even more good news. Evidently paternal pride improves when your dad has a pulse.

The President has made similar sentiments about deceased loved ones before.

In fairness, the emotional tale could lead anyone to believe he had passed. But that didn’t stop the internet from springing to action with jokes about the encounter. Quips about the joke “killing” internet users? You better believe Twitter had those in boatloads.

See below for reactions. Congratulations Herman. You’re not dearly departed yet. 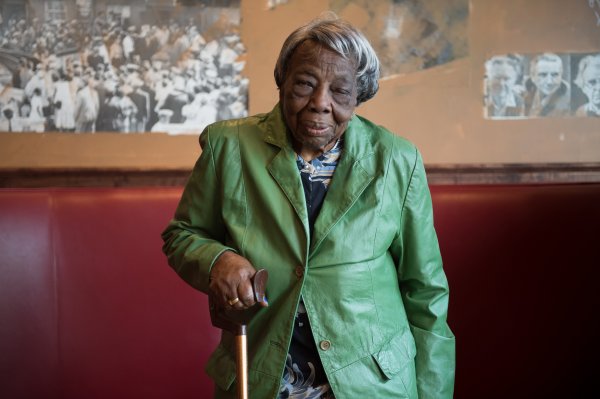 Woman Celebrates Her 109th Birthday By Partying With the Harlem Globetrotters
Next Up: Editor's Pick