It’s not yet clear whether there will be hamburgers, as Donald Trump suggested he could bond with Kim Jong Un over during his volcanic campaign, but on Thursday the U.S. President made good on his promise to negotiate with the North Korean despot, agreeing to sit down for historic talks by May, the first ever between the heads of the Stalinist state and its longtime American nemesis.

In fact, Trump will be only the second world leader Kim has ever met (presuming he first sits down with South Korean President Moon Jae-in). Because to date, the Swiss-educated 34-year-old — a basketball and Whitney Houston fan, by all accounts — has, rather aptly, remained sequestered in the Hermit Kingdom, doggedly advancing his weapons program. That he has achieved with some distinction: Today, the impoverished nation of 25 million has the ability to strike anywhere on the continent U.S. with a nuclear-armed ballistic missile. Trump should expect no less steel at the negotiating table. (The location for the talks is still under discussion.)

“President Trump made his reputation on making deals,” a senior administration official told a press call to justify the unprecedented summit. “Kim Jong Un is the one person who is able to make decisions under their authoritarian — uniquely authoritarian — or totalitarian system, and so it made sense to accept the invitation with the one person who can make decisions instead of repeating the long slog of the past.”

Read More: Why Trump’s Predecessors Did Not Meet With North Korea

Still, the stakes are unbelievably high for two geopolitical neophytes. Trump may point to a lifetime as a savvy businessman, though he has won few friends in international diplomacy, reportedly describing African nations as “shitholes,” pulling out of the Paris Climate Accords and preaching “America First” to bewildered international institutions that Washington founded and largely controls. He also has a threadbare State Department to handle preparations, especially after Joseph Yun, the top U.S. diplomat dedicated to North Korea policy, retired last month. South Korea still does not have a U.S. ambassador.

“The risk right now is as much on the U.S. side,” says Professor Stephan Haggard, a Korea expert at the UC San Diego School of Global Policy. “Is the administration in a position and does it have the staff and bandwidth to exploit this opportunity?”

Kim Jong Un, by contrast, cannot call on decades of wrangling over Manhattan real estate, but he was groomed for his unparalleled leadership role for several years before assuming power in late 2011, following the sudden death of his father, Kim Jong Il. Trump must be wary; canny brinkmanship defines the Kim clan. North Korean founder, Kim Sung Il, father to Kim Jong Il and grandfather to the current Kim, expertly played his estranged Chinese and Soviet benefactors off each other for decades to eke concessions. Following the fall of the Soviet Union, Kim Jong Il used the same tactic between China and South Korea, switching between antagonism and reconciliation. Noncompliance was rife. The younger Kim has learned these lessons well, threatening “seas of fire” one minute and then dangling denuclearization the next.

Even so, the scale of Kim’s current volte-face is flabbergasting. From vowing in September to “surely and definitely tame the mentally deranged U.S. dotard [frail elderly man] with fire,” referring to Trump, Kim has now flipped to pledging “he is committed to denuclearization,” according to South Korean National Security Advisor Chung Eui-yong, who addressed assembled media outside the White House Thursday evening. Kim has also promised a moratorium on weapons tests and that the talks would occur regardless of the looming U.S.-South Korea joint military drills, which Pyongyang abhors.

“I think it’s a genuine sentiment that if North Korea, the regime and the nation can see a way to feel secure without nuclear weapons they will do without them,” says Professor John Delury, an East Asia expert at Yonsei University in Seoul. “Then the question is: how do you make North Korea feel [secure]?”

That hurdle is monstrously high considering America’s recent record. Iraqi dictator Saddam Hussein and Libyan dictator Muammar Gaddafi were both toppled with American backing despite acquiescing to Washington’s request to abandon their atomic ambitions. Obama’s hard-won denuclearization deal with Iran is today being undermined by Trump, who has also taken aim at his predecessor’s rapprochement with Cuba. Kim knows that promises from a democracy only last as long as the administration that uttered them — if that.

China could play a role here, guaranteeing the security of the regime in the similar fashion as Japan and South Korea fall under the American “nuclear umbrella.” But Beijing already has a mutual defense treaty with North Korea, so its doubtful that alone would be sufficient. Kim may ask for the 30,000-odd American troops in South Korea to be removed, which would be a clear nonstarter for the allies. A sobering though very real possibility is that Kim is desperate for breathing space as unprecedented new U.N. sanctions bite, owing to stringent adherence by Beijing.

Although Trump tweeted after Thursday’s announcement that “sanctions will remain until an agreement is reached,” the rub lies in Chinese enforcement across the two nations’ 880-mile shared frontier, enforcement that can be tinkered with in a matter of hours. Kim might be trying to demonstrate to his Chinese benefactors — unsettled by Trump’s threats of a trade war — that he’s willing to cooperate so they take the foot off the gas. To achieve the maximum possible outcome from the summit, Russia, China, South Korea, Japan and the U.S. must remain united and steadfast in their goals. And Trump must prove his deal-making prowess lives up to the hype. 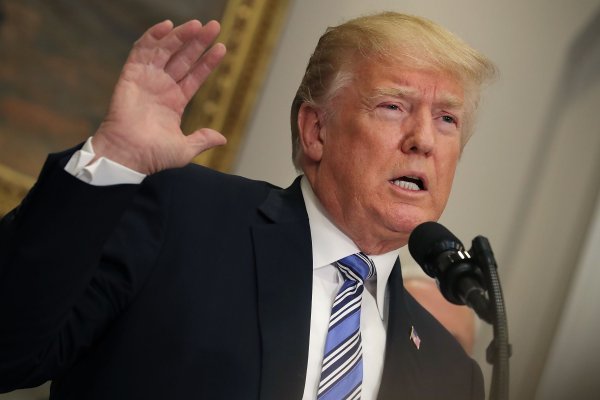