Stop Asking Whether Women 'Love Themselves Enough' to Leave Their Abusers

Dan Foy—Getty Images
Ideas
By Brittney Cooper
Brittney Cooper is a professor at Rutgers University and the author of Eloquent Rage: A Black Feminist Discovers Her Superpower.

Now that I’m grown, my mother speaks more freely about what the men who shaped her youth meant to her. Of my father, she says, looking off into the distance, “He was a terrorist.” My father controlled our lives through constant surveillance and random acts of violence designed to reinforce his control, power and ownership. But my mother felt like she owed my father loyalty, because she felt guilty for “getting him shot.” Her ex Bob had shot them both in retaliation for my mother’s choice to date someone new. And perhaps because she had learned how costly disloyalty could be. Of Bob, her would-be murderer, she says, “he was a fatal attraction,” whom she was attracted to, in her words, “because of low self-esteem.”

Eventually my mother met and married a lovely man, my stepfather, to whom she has been married for more than two decades. Much like these other men, my stepdad, a preacher whom I affectionately call Rev, told me about his own reckoning with the ways his father had been physically abusive toward his mother. “I resolved that I would never put my hands on a woman,” Rev told me once. All of these men, my father, my stepfather, and Bob, had to contend with the models handed down to them. But only Rev seemed to come to the right conclusion. My mother, for her part, always felt like her ability to make better romantic choices came from learning to love herself. I’m sure that’s part of the story. But it’s certainly not all of it.

Self-help gurus, pastors and poets love to point to black women’s “low self-esteem” as the cause for all black girl problems. Just learn to love yourself, we are told. But patriarchy is nothing, if not the structurally induced hatred of women. If every woman and girl learned to love herself fiercely, the patriarchy would still be intact; it would demand that she be killed for having the audacity to think she was somebody. Individual blame isn’t enough to solve the problem.

How are black girls supposed to grow up to be black women in love with themselves in a country built on the structural negation of black women’s humanity and personhood? Too much of the conversation about patriarchy in black communities pivots on black women’s low self-esteem. Black women are often admonished to make better choices. But my mother left Bob when he didn’t treat her right. She almost lost her life for it. The deadliest time for a woman in an abusive relationship is when she decides to leave. Still, despite almost being killed, when things got to be too terrible with my father, she left him, too. From where I sit, my mama made the right choice to leave every time it became clear that her man wasn’t going to treat her right. The abuse had nothing to do with her choices, and everything to do with the ways we don’t demand that men stop being violent.

Mama says she prayed about when to leave my Daddy, asking for the Holy Spirit to show her, a 23-year-old woman, the right time to end things. We should not have to rely on supernatural acts of God to keep women safe. And though my mother is clearly my hero, she deserved better options and more help. Young women encountering violent men today deserve those options, too. It’s not enough to teach women how not to attract violent men. We have to spend our time teaching young men how not to be violent men and partners.

Most Popular on TIME
1
Third Wave of COVID-19 in U.S. Is the Worst
2
The Disastrous Swedish Approach to Fighting COVID-19
3
Muslims Call for French Goods Boycott to Protest Caricatures 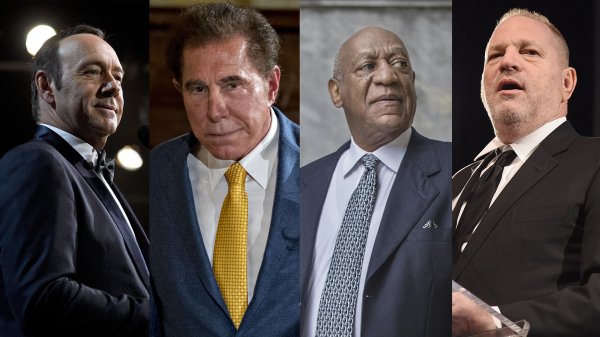 How to Find Room for Forgiveness in the #MeToo Movement
Next Up: Editor's Pick