How Rep. Adam Schiff Became a Central Character in the Trump-Russia Fight

Rep. Adam Schiff, D-Calif., ranking member on the House Intelligence Committee, waits for elevator doors to close during a break in the committee's questioning of White House communications director Hope Hicks as part of its ongoing investigation into meddling in the U.S. elections by Russia, at the Capitol in Washington
Cliff Owen—AP/Shutterstock
By Massimo Calabresi

For most of his 17-year career in Congress, Adam Schiff was boring. A Harvard-trained lawyer, he was careful and precise in his remarks to the media and lurked on low-wattage committees, like Intelligence and Judiciary, that are heavy on policy, light on political power. On the sometimes raucous congressional trips abroad known as CODELs, he stayed sober and went to bed early.

But now, as a leader of one of the investigations into Russia’s 2016 election operation, Schiff is suddenly exciting passion on all sides. At the annual Gridiron Club dinner in Washington on March 3, President Donald Trump lashed out at Schiff. “Adam is constantly on television pushing the idea that somehow I would undermine democracy,” Trump lamented. “He was going to come tonight, and then he heard that this was not a televised event so he stayed home.” Schiff’s notoriety at the White House is matched by adulation elsewhere. At a recent security conference in Munich, Schiff could barely make his way through the crowded halls without an admirer grabbing his arm and thanking him for “all [he is] doing for America.”

Which leaves Schiff bemused. “Before the Russia investigation,” he says, snacking on sushi and bottled water in the unprepossessing carryout market in the basement of the Capitol, “people would say, ‘When I see you on TV you sound very thoughtful and rational.’ And I always made the same quip in reply and would say, ‘Clearly there’s no future for me in this business.'” Now, he says, “I’m a walking focus group.”

What’s changed? At the crossroads of American politics and intelligence, where Schiff is a central player, the simple answer is, Everything.

In the wake of Russia’s 2016 influence operation, both the Senate and House Intelligence committees launched investigations to uncover what happened. The Senate probe has plodded along in a largely bipartisan manner, but the House committee has devolved into farce. In one dramatic episode, the Republican chairman of the committee, Devin Nunes, produced a memo alleging that anti-Trump bias at the FBI and the Department of Justice drove the probe into the Russian operation and possible collusion by the Trump campaign. Trump declassified the memo, which contained secret information, and Nunes released it over the objections of Justice and the bureau.

Schiff, the committee’s top Democrat, responded with scathing attacks. Nunes, he says between bites of sushi, is “a Trump surrogate” who is using the Intelligence Committee “to protect the President.” That, Schiff says, is part of a larger problem: Trump’s assault on the institutions that safeguard democracy in America. “The President is undermining the independence of the Justice Department and demeaning judges who rule against the Administration,” Schiff says. “It’s part of a broader attack [eroding] our system of checks and balances.” Nunes and Trump respond that it is Schiff who is playing politics on Russia.

It’s not just political theater. In the larger sense, Schiff’s transformation from quiet, behind-the-scenes intelligence wonk to front man in the fight over Russia, portends a dangerous moment–even a crisis–for intelligence oversight in America. The question of why our security services missed Russia’s 2016 attack on the core exercise of our democracy has languished as the House investigation has seized up. And for the first time since the Nixon era, a spreading political scandal threatens to upend how we control and monitor the secret work of our government.

I first met Schiff in January 2005, when I was covering Capitol Hill, three years before Speaker Nancy Pelosi would ask him to join the Intelligence Committee. Schiff is a centrist on fiscal and national security policy and a liberal on social issues, and two of the main industries in his Southern California district are Hollywood and aerospace. The latter relies heavily on Pentagon spending for intelligence satellites, so it made sense to join a committee that, despite its aura of intrigue, is normally a low-profile assignment. The most memorable impression I took away from our conversation in the Cannon House Office Building was of someone who viewed the media with impassive forbearance.

Which suited him well for a committee founded on a promise of discretion. In the ’50s and ’70s, the NSA, CIA and FBI had variously eavesdropped on American dissidents, drugged unwitting innocents in mind-control experiments and directly interfered with American politics. Congressional investigators who uncovered those abuses cut a deal with the penitent agencies: the spooks would share their most treasured secrets with two newly created committees of the people’s representatives if Congress promised not to use the information for political purposes. Most members thought the bargain worthy, and the House and Senate oversight committees attracted a lot of earnest, careful types.

To hear Schiff tell it, Trump and Nunes have undermined that more than 40-year balance-of-power agreement. “That compact was broken by the publication of the [Nunes] memo,” Schiff says. The result, he says, is a breakdown in trust between the Hill and the spies, and a precedent “of monkeying around with classified information for political purposes.” Nunes responds that it is the founding mission of the committee to police bad behavior by the intelligence community, including what he says was the politically motivated investigation of members of the Trump campaign.

Trump, for his part, says Schiff has been playing fast and loose with the nation’s secrets. At the Gridiron, Trump dubbed Schiff “Leakin’ Adam” and half-joked that Schiff constantly runs out of meetings to break news on TV. History will show who is telling the truth. But in Washington–where answers to reporters’ questions regularly begin, “Are we on background?”–Schiff is, in my experience, memorable for insisting on speaking on the record. “It makes life easier,” he says.

It’s unclear where all the political drama and its attendant fame will lead for a politician once unaccustomed to the spotlight. In a minivan on the way to a dinner honoring John McCain at the Munich conference, a GOP Senator ribbed Schiff about his appearances on TV and asked if he was running for President. Hardly missing a beat, Schiff said, “You must be mistaking me for a Senator.”

In the House, Schiff may get a chance to put his money where his mouth is on the Russia probe. If the Democrats take control next fall and Pelosi becomes Speaker again, she could name Schiff chairman of the Intelligence Committee, with the power to call witnesses and subpoena documents from inside government and out. Schiff is finding that his newfound fame will improve his chances of getting the top spot. His own California seat is considered safely Democratic, but others in his party need help. Toward the end of our conversation, he looks at his watch and says, “Oh, I have a call,” and wanders off to speak with a needy candidate.

With elections every two years, the House has always been the more partisan chamber. But whatever the result in November, the challenge for Schiff, the committee and America will be getting politics back out of the room where patriotism is supposed to provide common ground. 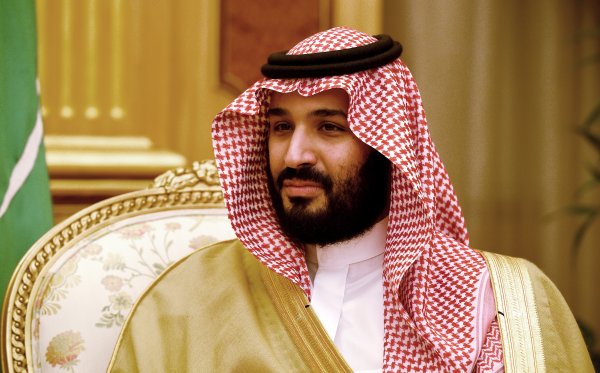 Saudi Prince Says Turkey and Iran Anchor a 'Triangle of Evil'
Next Up: Editor's Pick