These Dreamers Were Deported to Mexico. Now, They're Helping Others Start Again

Israel Concha, founder of New Comienzos, poses in front of the Monument to the Revolution in Mexico City on July 31, 2017.
Andrea Sosa Cabrios—dpa/Alamy Live News
By Oscar Lopez / Mexico City

On a recent Wednesday morning in Mexico City’s International Airport, family members gathered anxiously for the latest slew of arrivals. The cordon can be a place for joyful reunions, but on three days each week a more somber drama unfolds: Here, every Tuesday, Wednesday and Thursday, about 130 deported Mexican citizens arrive home.

The minutes ticked by slowly until finally the deportees stumbled in, clutching their meagre belongings and their crumpled deportation documents. Each had a plastic bag containing a sandwich and a bottle of juice. For many of the younger arrivals, this was their first experience of Mexico.

Walking wearily into the hall was Fernando Alvarez, 25, who was detained on Dec. 19, and had spent Christmas and New Year’s Eve in detention. Taken to the U.S. by his Mexican parents when he was just two years old, Alvarez grew up in California before moving to Chicago five years ago. “It’s a new place,” he said in perfect California English as he looked blearily around the terminal. “I’m the new kid. But I still feel like I’m an American, bro. A Mexican American.”

Waiting to greet Alvarez and other young deportees was Israel Concha, 38, who knows the feeling all too well. Broad-shouldered and barrel-chested, Concha wore a fluorescent green t-shirt emblazoned with ‘New Comienzos’ or ‘New Beginnings,’ the name of the organization he founded in 2015 to support young undocumented Mexicans or ‘Dreamers’ returning to Mexico.

A former Dreamer himself, Concha was deported after thirty years living in the U.S. “I felt like zero, like garbage, like scum,” says Concha, describing himself as being marched back into Mexico in 2014. “That’s when I thought about the pledge of allegiance I’d taken every morning in elementary school. I thought, where’s the liberty? Where’s the justice for all?”

The fate of Dreamers like Alvarez has been at the whim of a heated congressional debate in recent weeks, as Congress pondered whether or not to extend the Obama-era program known as DACA, or Deferred Action on Childhood Arrivals, which offered temporary legal status to some 700,000 young people. The vast majority are from Mexico, with some 600,000 young Mexicans at risk of deportation if the program is not renewed.

President Donald Trump said last year he would phase out the DACA program by March 5, calling on Congress to create a replacement. Although the deadline has come and gone, the courts have ordered the administration to continue renewing applications, for now. But with the future of hundreds of thousands of young people hanging in the balance, activists like Concha are taking no chances. “If tomorrow they start deporting thousands of people, our government isn’t ready,” says Concha. “So we’re creating these opportunities in case the worst happens, so Dreamers can have a light at the end of the tunnel.”

On the streets in Little L.A.

In front of Mexico City’s towering monument to the Mexican Revolution sits a sleek coworking space where Concha runs New Comienzos. Offering Spanish language classes, psychological support and assistance finding work and a place to live, Concha says his organization, which is largely funded by donations from undocumented migrants living in the U.S., has helped over 5,000 young Dreamers call Mexico home. “To help others, this is therapy for me,” he says.

The Mexican government does offer help to the deported, and has promised to support returning Dreamers. The National Institute of Migration offers basic services like food, shelter, and documentation, while in Mexico City, the government provides unemployment allowance and training programs to help people find work. “Mexico City has an age-old tradition of hospitality,” says Amalia Dolores García Medina, Secretary of Labor and Employment Promotion in Mexico City. “Our constitution guarantees the human rights of migrants.”

But few, if any, of these initiatives have been set up specifically with Dreamers in mind, and in any case, such limited programs may not have the capacity to support a sudden influx of deportees, at least outside the capital: Last year, then-Finance Secretary Jose Antonio Meade admitted that, if the country faced a large increase in the number of Dreamers wanting to enroll in university, the government would “not have the budgetary capacity to accommodate it.”

So non-profits like New Comienzos are stepping in to help out. The location for its offices is strategic; a nearby call center employs dozens of young Dreamers because of their fluency in English, a language which for most is more familiar than Spanish. The call center is something of a hub, and a number of businesses, from barber shops to burger joints, have sprung up in the area to cater to this new Americanized population — so much so that the neighborhood is known as ‘Little L.A.’

Among the call center workers is Fernando Aragon, who was deported in 2016 after living in the U.S. since he was six months old. “I had the potential to become something great over there,” he says. “But that doesn’t mean I can’t be great here.”

Aragon, who had been an honors student in high school and was protected by DACA, was sent to Mexico after being caught driving under the influence. It was tough, at first, being alone — but then his mom recommended he call Concha, having seen New Comienzos on Facebook. “When I sat down and talked with him, he overwhelmed me,” says Aragon of Concha, who helped him get on his feet. “Just with the way he is.”

Yet for many young people, finding work and a place to live is just the beginning of the struggle to adapt to country that, for many, is just a distant memory. “It doesn’t feel like going home,” says Beth Caldwell, a professor at Southwestern Law School in Los Angeles and author of the forthcoming book Deported Americans in Mexico. “It feels more like they’re being banished from their country of origin, they’re forced to give up everything that’s given their life meaning.” As a result, says Caldwell, many young deportees battle with depression and anxiety.

For Lalo Aguilar, 29, who grew up in a small town in Utah, being deported six years ago threw him into a downward spiral. “It was four and a half years of being in this cold depression, in this shell,” he says. “I didn’t want to do anything, I didn’t want to deal with anything.”

But in the middle of his depression, Aguilar came across Los Otros Dreamers, or ‘The Other Dreamers’, an anthology of stories by other Dreamers who had returned to Mexico, and he realized there were others all over the country going through the same experience. Edited by Jill Anderson, an American academic living in Mexico at the time, Los Otros Dreamers soon grew into a movement. “Jill was the first one to look at not just deportation, but our generation, our bicultural community,” says Aguilar.

One of the young people featured in Los Otros Dreamers was Maggie Laredo, 27. Laredo, who went to the U.S. with her parents when she was two, had no idea she was undocumented until she got to high school and her friends started getting jobs and drivers licenses, things she had no access to. “That’s when I bumped into the reality of my situation,” says Laredo.

Wanting to go to college, but realizing it would be impossible in the U.S., Laredo decided to leave her family behind and voluntarily return to Mexico. “It was the only option I had,” she says. Laredo moved back to the city of San Luis Potosi, but found the country unprepared for her: It took her five years to have her American education validated in Mexico. “There were no government programs,” she says.

So in 2015, Laredo helped found a collective called Otros Dreamers en Acción or Other Dreamers in Action (ODA), to campaign on migrant rights, particularly education, so that others wouldn’t have to go through the same experience. Working with Mexican authorities, universities and other organizations, ODA helped push the government to streamline the validation process. “Something that took me five years now should take 15 days,” says Laredo.

Aguilar, the deportee from Utah, now works at the organization. “For the first four years after deportation, I hadn’t been doing anything,” he says. “I was just locked in my room, in depression, drinking, doing drugs. Now I feel useful, like I’m doing something for the community.”

The election of U.S. President Donald Trump in 2016 on the promise of a radical crackdown on immigration changed everything for these charities and activist groups. “After the elections,” says Laredo, “we knew we needed to have a stronger voice, to tell the world this is not something new.” So last year, ODA became a certified non-profit organization to advocate for Dreamers’ rights on both sides of the border, and support returned young people in their transition home. “Everybody has family in the U.S., so we’re living it first-hand,” says Laredo, whose brother is still in the US, under the protection of the DACA program. “It’s a period of stress for the community.”

Back in Little L.A., Aragon recalls the weeks after Trump’s election with sadness. “It opened up everybody’s eyes to what’s going on behind closed doors,” he says. “I had friends that used to take me to football practice who started posting ‘go back to where you came from’ and deleting me from Facebook.”

Aragon now splits his time volunteering at New Comienzos and working at the call center, commuting four hours a day to get to work. He says he’s excited by the opportunity to help others like himself to make Mexico home. “Being able to give someone the comfort, the silver lining, to show them that there’s something more than being afraid,” he says. “I think I found the reason I was meant to be here.” 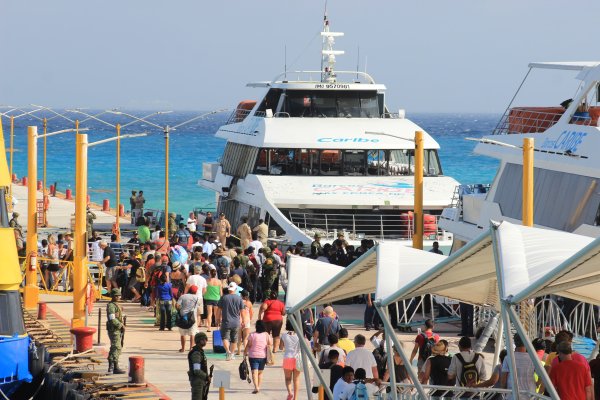