The Real Trade War Is Inside Donald Trump's White House

On Feb. 28, John Ferriola, the CEO of America’s largest steel producer, Nucor, got a call from the White House. Could he be in Washington the next day? With few details to go on, Ferriola dutifully showed up at the West Wing on March 1, where he and a dozen other metals-company executives were ushered into the Cabinet Room. Soon, they were told, they would be having a private meeting with President Donald Trump.

The topic was the imposition of tariffs on imported steel and other metals, measures the industry has long sought. As Trump talked, it seemed to Ferriola that the President was leaning toward action but hadn’t made up his mind. By the end of the meeting, encouraged by the executives, Trump seemed convinced. Immediately after, he told the press he planned to put surcharges of 25% on imported steel and 10% on aluminum. “People have no idea how badly our country has been treated,” Trump said as the CEOs nodded along. “They’ve destroyed the steel industry, they’ve destroyed the aluminum industry.” But, the President said, “we’re bringing it all back.”

Washington flew into a tizzy. The stock market swooned. Republicans rebuked Trump in dire terms. Soon rumors flew about the President’s motivations. He was said to have acted in a fit of pique, inflamed by special counsel Robert Mueller’s ongoing Russia investigation and the resignation of his communications director and confidant Hope Hicks. But the President was undeterred. Responding to the hail of criticism the following morning, he tweeted with characteristic puckish­ness: “Trade wars are good, and easy to win.”

Trump’s declaration was exactly the sort of brazen middle finger to the establishment that he promised his voters in 2016. But for all his campaign populism, the GOP establishment had, to that point, been successful in constraining Trump on trade during his first year in power. Trump’s metals tariff, if he goes through with it, would represent a rare and consequential break with GOP orthodoxy.

Trade policy has also been the subject of vicious infighting within the White House. Trump’s top economic adviser, free-market advocate and Goldman Sachs alum Gary Cohn, resigned on March 6 in the wake of the announcement. Yet even those closest to the issue weren’t sure that Trump had made up his mind to impose the tariffs. The President seemed caught between competing impulses: his strong, long-standing convictions on trade, and his record of compliance with Republican doctrine.

Since the 1980s, Trump has com­plained that the U.S. was being cheated by unfair foreign competition. As a presidential candidate he hammered on the idea of “getting tough” with, in his distinctive pronunciation, “Chyyy-nah.” Trump’s stance on trade set him apart from other Republicans and was at the heart of his appeal in formerly blue states like Pennsylvania, Michigan and Wisconsin, and it epitomized his opposition to “globalism,” elites and experts, and his emphasis on muscular nationalism. It was also bound up with darker impulses: xenophobic distrust and nostalgia for a bygone social hierarchy.

The “forgotten man,” as Trump termed his bloc of blue collar supporters, welcomed the promise to make America great again by bringing back manufacturing. And after voters in the industrial heartland helped power him to victory, Trump suggested that he would make good on his rhetoric. In his Inaugural Address, he vividly evoked a landscape of “rusted-out factories scattered like tombstones across the landscape of our nation.” The newly sworn-in President thundered, “We must protect our borders from the ravages of other countries making our products, stealing our companies and destroying our jobs.”

Trade was just one of the populist promises that tradi­tional Republicans feared Trump would follow through on in office. But they soon realized the new President was disengaged from policy details, easily distracted and susceptible to flattery. In practice, many of the policy disruptions Trump had threatened—from health care and taxes to, more recently, gun control and immigration—proved to be empty threats. As a result, despite his instincts, Trump has governed mainly as a conservative. On trade, the free-marketeers in the White House, like Cohn, succeeded in diverting Trump from scrapping NAFTA and other radical measures.

But if Trump’s ardor for tariffs cooled, he was never persuaded to change his mind. In one Oval Office meeting, he vented to chief of staff John Kelly that he felt stymied by the globalists in his orbit, according to Axios. “I want tariffs. And I want someone to bring me some tariffs,” the President insisted. By March 1, Trump seemed finally to have cast off the restraints. But the furious behind-the-scenes campaign to temper his impulses has not let up, and until the papers are drawn up and signed, he could still change his mind.

And so Washington, Wall Street and the steel industry wait to see which Trump will prevail: the gut-level protectionist or the good Republican soldier. Cohn’s departure seemed to signal that the anti-tariff faction had lost the internal battle. “We’ve been waiting for the President and Administration to let us know what’s going on,” says Ferriola, the Nucor executive. “We’re hopeful that the President is going to move forward with the commitment he made during the campaign.” 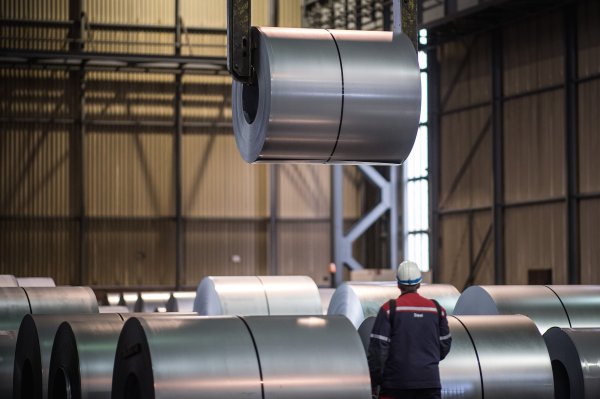 Trump Wants to Impose Steel Tariffs. It Didn't Work for Bush
Next Up: Editor's Pick