What Exactly Is a Nor'easter? The Powerful Storm With a Strange Name Is Currently Pummeling the East Coast

Waves crash against the seawall along Turner Road in Scituate, MA during a nor'easter storm on March 2, 2018.
Boston Globe—Boston Globe via Getty Images
By Sarah Begley

The name alone might make you shiver in your boots — but what exactly is a Nor’easter, the powerful winter storm that devastated parts of the country last week and is once again barreling through the East Coast?

A trio of Nor’easters have hit the East Coast over the last two weeks, starting with the deadly Winter Storm Riley, which killed eight people and knocked out the power for millions of Americans throughout the East Coast earlier this month. It was quickly followed by Winter Storm Quinn. And now a third Nor’easter — this one dubbed Winter Storm Skylar — is set to wallop the Northeast on Tuesday.

Prior to Winter Storm Quinn, AccuWeather senior meteorologist Carl Erikson says “it’s not unusual” for strong Nor’easters to arrive back-to-back. But the problem with the continuous stream of winter storms is that Winter Storm Riley already weakened many tree branches in the region — and with Quinn’s heavy, wet snow, it was possible even more branches would break under the pressure.

On Tuesday, according to the National Weather Service, Winter Storm Skylar will move up the Northeast, where its impact will be felt particularly hard in New England, with Massachusetts prepping to bare the brunt of the storm. More than a foot of snow is expected in parts of Massachusetts up to the coast of Maine, according to Weather.com, along with wind gusts of up to 60 miles per hour. A Coastal Flood Advisory has been placed on parts of Massachusetts, including Nantucket and parts of Plymouth County.

Blizzard conditions are also expected for coastal Massachusetts, according to the National Weather Service outpost in Boston.

Here’s what else you need to know about Nor’easter storms, including where the name comes from.

What is a Nor’easter?

A Nor’easter is pretty much exactly what it sounds like: a storm featuring winds from the northeast off the Atlantic Ocean, affecting the East Coast of the United States. The storms typically develop between Georgia and New Jersey, according to the National Weather Service.

“As the storm comes off the coast, you get that northeast wind, kind of a like a low-pressure, counter-clockwise spin,” Erikson said.

Though the term is often linked to winter storms, snow is not a meteorological requirement for Nor’easters — as the term can also apply to rain storms. Strong winds, flooding, and choppy seas are all regular features of Nor’easters as well. And the most powerful Nor’easters typically occur from September to April, the Weather Channel reports, so there may be more to come in 2018.

While hurricanes form in the tropics, Nor’easters form farther north, in what’s known as a mid-latitude region.

Why is it called a Nor’Easter?

While many assume Nor’easter is the name is a product of some kind of Maine lobsterman accent, that’s probably not true. In their book Origins of the Specious: Myths and Misconceptions of the English Language, Patricia T. O’Conner and Stewart Kellerman write:

Instead, “Nor’easter” seems to come from across the Atlantic Ocean. As far back as the Elizabethan period, the English used “nor'” and “nor’east” to refer to compass points.

The Oxford English Dictionary cites the first written usage of “nor’easter” in London in 1837, in a translation of the Aristophanes play The Knights by B.D. Walsh: “Slack your sheet! A strong nor’-easter’s groaning.” The unabbreviated term “northeaster” appeared in print earlier, in the Boston Post-Boy in 1753: “Cap. Savage had a strong North-Easter some Hours before, about 8 Leagues S. W. of the Cape [Florida], in which he carried away his Boltsprit, but happily recover’d it again.” 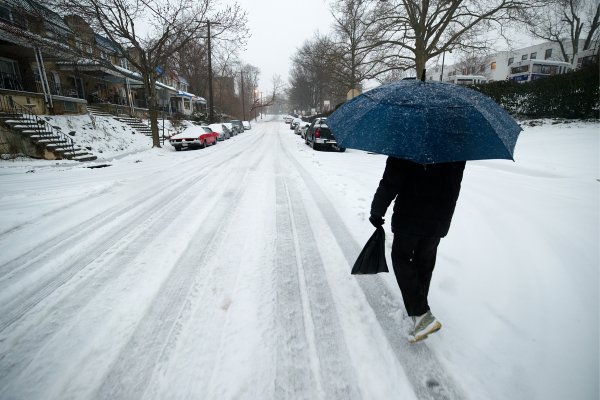 The Second Nor'easter in a Week Is Bearing Down on the East Coast. Here's What to Expect
Next Up: Editor's Pick