Bumble CEO on Banning Gun Photos: ‘Why Would We Want to Romanticize a Weapon?’

Female-driven dating app Bumble announced on March 5 that it would ban most of its almost 30 million users from posting images that include firearms and other weapons on its platform, following the mass shooting in Parkland, Fla. (Only those who have served in the military or worked in law enforcement will be able to keep photos with guns in them — as long as they’re carrying them in uniform. The company also will not censor photos drawn from users’ Instagram accounts.) Bumble CEO and founder Whitney Wolfe Herd spoke to TIME about the company’s decision.

Why do this? We were founded with safety at the helm of everything we do — to create a kinder Internet, to create a platform that would encourage accountability and rewrite the rules of how we interact with each other. If you think about what Bumble is, it’s a mechanism to connect. People are putting themselves out there, they’re showcasing themselves and they’re doing so in the hopes of attracting a connection. We don’t want guns to be part of that conversation. We don’t want guns to be romanticized. It was time to stake a stand.

What would you say to users who are gun hobbyists? Why should they not be able to display their passions and interests on a dating app? Our team is a collective of so many different individuals — we have Republicans on our team, we have Democrats on our team. We have team members with family members who are supporters of the NRA. We have team members who either themselves or their loved ones have been a victim of some form of gun violence. We literally have people at every corner of this discussion.

At the end of the day, we ultimately landed — regardless of personal beliefs and politics — that this is a matter of safety and a matter of what is taking place in our country right now. Until the violence comes under control, we should not normalize a hobby and allow that to be exposed to millions of people. We want women — and men — to feel comfortable, to feel safe and feel secure. Weapons don’t send that message.

This is not about discriminating against anyone who has political beliefs one way or the other. This is us saying that we’re going to lay the groundwork for our ecosystem, and we don’t want violent weaponry to have a place here.

Why risk losing so many users? We will always put our values above our bottom line. End of story.

You’ve said that this wasn’t a politically driven decision, but this move is coming during a time of heightened gun-control discussions, and you made a $100,000 donation to the gun control-rally organized by Parkland students, March for Our Lives. What would you say to people who believe this decision is politically motivated? Seventeen lives were taken. I don’t care if you are a Democrat or a Republican, those were human lives that were lost on a random Wednesday when they were in what is supposed to be the safest place for our children: school. They were learning; they were working toward their future. That, for me, is bigger than politics. That, for me, is human ethics.

The recent mass shootings have sparked discussions about the link between domestic violence and gun violence. Did that come up in your discussion? This is something we take very seriously. We have several members of our team — a sociologist and others — who do research on domestic abuse, matters of hatred and vitriol. The truth is so many women die every year because of abusive acts from a partner. If you do the research and look at the statistics, guns are a big piece of that.

Why would we want to romanticize a weapon that is used in so many instances of violent crimes against women? And looking at all of these mass shootings, the only commonality amongst most of them is a history or a past of domestic abuse.

How is Bumble going to enforce this? It’s been a work in progress. We have around 5,00o moderators who work remotely across the globe so we cover every time zone. As of yesterday, we put into effect the taking off point to start moderating photos. Over the next month, it might take a little longer, we are going to have those amazing moderators go back and really moderate the photos.

Yesterday alone, because we stood up for something and we drew our stance in the sand, we had an over 3,000% increase in photo reporting, and we saw a 95% increase in female activity after the New York Times story yesterday.

What was the user response like? We had an outpouring of support in our Bumble feedback email and I received personal emails from so many women just saying, “Thank you, I feel safer.” But to be candid with you, we did have some women reach out and ask: “Well how do I know that someone is a gun owner now?” And once we walked them through our logic, they actually really understood and appreciated where we were coming from. Being able to ask what someone’s beliefs are is not as hard as the consequences of someone casually showing a gun, which might send the wrong message to someone who might go and misuse a gun.

There have also been a lot of awful threats that have come through. I’ve received very ugly messages from several people who were upset about this. And that’s O.K. The way they reacted shows that having someone who is willing to be abusive like that probably isn’t good for our ecosystem.

Bumble is about bringing people together. Are you worried about contributing more divisiveness? Divisiveness is something that you have to be willing to accept when you take a stand. If you don’t want any criticism, you literally have to do nothing. We don’t believe that’s productive or proactive.

We’re a team led predominantly by women. As women leading a tech company, which in and of itself is so rare, we feel it’s our duty to do what we believe in, what we feel is core to what we would want from a company that we were engaging with. If we were using the platform, how would we want to feel? We constantly try to put ourselves in our user’s shoes.

Yes, there will be some divide. But the way we mitigate that is by being honest. We don’t hate you. We don’t want to block you if you like guns. We just don’t want to showcase guns here.

Why is Bumble doing this when other tech companies — like Twitter and Facebook — aren’t? We connect millions of people, which does affect behavior and society. There are things that we see in the real world that we wish we could change. If we can have any control over that from a product standpoint or a decision-making standpoint, as a company, that’s our duty. We have a responsibility to do something better for the world. 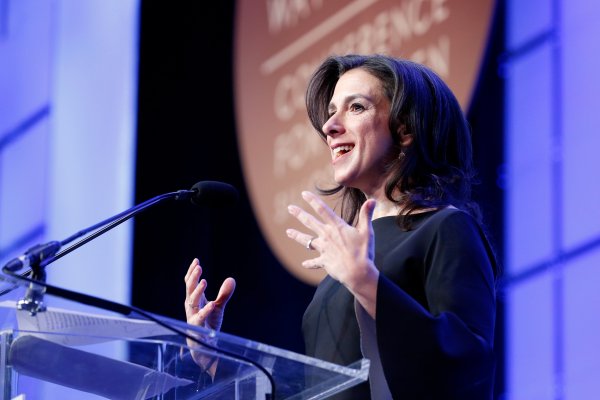 Reporter Jodi Kantor on What's Next for the #MeToo Movement
Next Up: Editor's Pick