Senator Ted Cruz (R-TX) speaks to reporters at the U.S. Capitol in Washington, U.S., May 10, 2017.
Joshua Roberts—Reuters
By Maya Rhodan

As polls close in the Texas primary election Tuesday night, Democrats and Republicans will be looking closely for evidence of the political fallout from the Trump Administration’s approach to immigration.

Democrats haven’t won a statewide election in the deep-red state since 1994 — the nation’s longest losing streak — but they believe they could be helped this year by issues like Washington’s inability to resolve the Deferred Action for Childhood Arrivals, an Obama-era program that shields some 700,000 young immigrants from deportation.

By Tuesday night it will still be too soon to tell how things might play out this fall, but turnout, where voters are concentrated and who wins crowded primary fields will give some clues.

Democrats have their sights set on five congressional districts in the Lone Star state and at least three have been named contests to watch by national outlets. One, Texas’s 23rd , is a swing district that’s home to nearly one-third of the U.S. border with Mexico.

Republicans and Democrats are facing off against members of their own party on Tuesday and there is little intra-party difference when it comes to immigrants and border issues.

But Cal Jillson, a political science professor at Southern Methodist University, says the issue has likely been a motivating factor for many voters, some of whom have already gone to the polls. Over 800,000 voters have voted either in-person or by mail this early voting period, about 300,000 more voters than in 2014, reports show. Democratic turnout surpassed that of Republicans in midterm early voting for the first time ever. Compared to four years ago, about 150% more Democrats voted early in 2018 and major boosts in turnout occurred in six counties with high Latino populations.

“I think some of that Democratic surge and turnout can be attributed to DACA and border issues more generally,” Jillson says. “But as we move toward the general election, that’s where we’ll see immigration and DACA in particular having a major impact because then the races will be between a Democrat who favors immigration reform and a Republican who is talking about building a wall.”

The 23rd congressional district in Texas is home to more than 800-miles of the border. According to state election records, there was high Democratic turnout in two counties that make up some of the, El Paso and Bexar counties. But regardless of who wins the Democratic primary on Tuesday, both candidates in that race will largely agree on the issue of an expansive border wall when it comes time for the general election.

In the district’s primary, Democratic candidates have painted the proposed wall and Donald Trump as their enemy. One candidate used the existing border fence as the backdrop of a late-January ad in which he declared he was running for Congress to stop the president from “destroying the American dream.” And at a recent candidate forum, all five Democratic candidates were critical of Hurd’s record on the issue though they largely agree on the need for comprehensive immigration reform.

Its current Representative, Republican Will Hurd, has been a vocal opponent of Trump’s proposal to construct a wall along the entirety of the southern border. Hurd is also the co-sponsor of a bipartisan bill that would offer a pathway to citizenship for Dreamers and secure the border. In a statement to TIME, Hurd said that lawmakers on both sides of the aisle have an obligation to help DACA recipients, regardless of party affiliation. “My philosophy is simple: put together smart legislation, do it in a bipartisan way and actually solve the problem,” he says.

While Democrats are hoping to put up a fight this election cycle, Texas remains a Republican stronghold. And immigration fires up voters on the right, too.

“Immigration is a core issue for Republicans who generally are in favor of strong border control, stopping illegal immigration and limiting legal immigration,” says Jillson. “That position is held by, generally, older male white voters and they turn out in very substantial numbers.”

Victoria DeFrancesco Soto, a lecturer at the University of Texas at Austin’s Lyndon B. Johnson School of Public Affairs, argues the issue could have mattered more than it likely will on Tuesday because Republicans in toss-up races could have been fending off competition from the far-right. “It was in the primary where it could have had the most impact because primary voters tend to run so much most to the extreme,” she says. “In the general, I think it will be used by Democrats to mobilize.”

That does not mean immigration has not come up in Republican primaries. Take the race to fill the seat left open by Republican Rep. Joe Barton of Texas, who announced he wouldn’t seek re-election after illicit images he’d sent a woman years ago leaked. Barton, whose district is home to at least 7,700 Dreamers, supports a legislative fix to DACA.

But in January, Republican candidates vying for his seat maligned immigrants with one suggesting that they should live out their dreams in their countries of origin, not America. Barton is holding out hope that a legislative fix will pass in Congress before the general election. Long term, he says, the Republican Party should be concerned about trying to grow its base to include more Latino voters, many of whom have direct ties to the immigrant community.

“Why we go out of our way to snub them and to exclude them from our Republican Party just doesn’t make sense to me,” he says.

Surges among Democrats could depend on minority and young voter turnout, which tends to be low in midterm elections, but the results from Tuesday night could give a sense of the level of engagement we can expect from so-called resistance voters come November.

Beyond Texas, Ali Noorani of the National Immigration Forum predicts that immigration will be a determining factor in the dozens of districts where voters supported Mitt Romney in 2012 and Hillary Clinton in 2016. Many of those voters were turned off by the anti-immigrant rhetoric, among other things, in the 2016 election. Inaction on DACA could further their displeasure with the turn the Republican Party has taken on the issue.

“There is a larger swath of the American electorate that has come to know, respect, and really admire immigrants and refugees in their communities,” he says.

Polls show that voters want a DACA fix. Around 8 in 10 Americans want the program to continue, a recent CNN poll found. A Harvard Center for American Political Studies-The Harris Center poll showed 76% of voters support a pathway to citizenship for so-called Dreamers, including 63% of Republicans. A Quinnipiac University poll from February also found some 58% of registered voters nationwide would blame Republicans if Congress failed to pass something to solve the issue.

There is still a slim chance that lawmakers act to solve the DACA fix before it’s too late—both for Dreamers and the jeopardized Republican majority. Republican Sen. Jeff Flake is hoping a short-term solution can be affixed to an upcoming must-pass spending bill later this month. For young immigrants, that could further relieve the pressure their facing without a permanent DACA fix. And Noorani says a save could be a boon for lawmakers on the right heading into November.

“If Republicans in the House and the Senate were actually to find a bipartisan solution for Dreamers, I think it would pay real dividends for them at the polls,” he says. “Right now, they are ceding that entire debate to Democrats.” 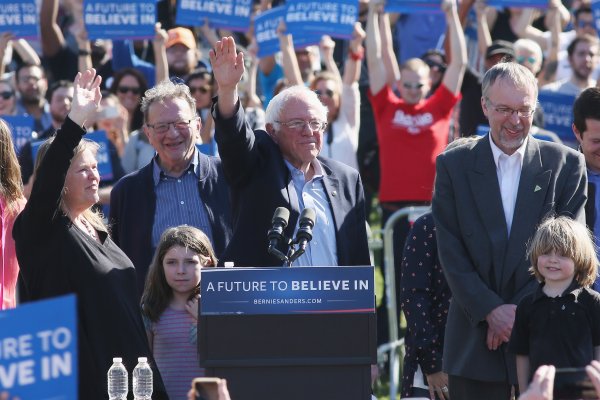 5 Things to Know About Bernie Sanders' Son Who Is Running for Congress
Next Up: Editor's Pick