The Bachelor Recap: Arie Proposes, but Becca Gets the Ultimate Revenge

On The Bachelor, Arie’s journey to find love has taken a strange detour. He proposed to Becca and then changed his mind, dumping her and trying to get back with Lauren. “I feel a little bit like a monster right now,” said Arie and the world nodded in agreement. There has been a lot of fall-out from Arie’s public take-backsies. For instance, people were Venmo-ing Becca cash so the girl could buy herself a drink, nearly 10,000 people retweeted a Minnesota state rep’s promise to draft a bill banning Arie from Minnesota, everyone tweeted at the wrong Lauren, and then some genius purchased billboards across L.A., Minneapolis and Times Square calling Arie out for being a jerk.

Here’s what happened on After the Final Rose:

What Did Becca do to ABC?

Not only did Becca not get to go to Machu Picchu, but then she got dumped on prime time television. The producers clearly wouldn’t let Arie leave so Becca could cry in peace, and then, as an eagle-eyed Bachelor watcher noticed, the producers sent Becca home from L.A. in a middle seat. They probably made her give Neil Lane his diamond ring back. Clearly someone in production has it out for her. Back in Minneapolis, Becca flips through photos of her time with Arie, crying her eyes out. She watches video footage, reads her diary and generally throws herself a well-deserved pity party.

Arie hopes he didn’t ruin things with Lauren by dumping her, proposing to another woman, and then extraditing her back to the U.S. so he could talk about making babies with his newly-minted fiancée. He hopes he didn’t make it worse by staying with Becca, the woman he proposed to. Arie goes to knock on Lauren’s door and when he sees her she throws her arms around him. She knows he dumped Becca and since she is clearly not a girls-before-guys sort of girl, she is happy to have him back. They sit on her couch and Lauren asks Arie why he chose Becca in the first place. Arie says Becca was very confident in their relationship and Lauren once showed some doubt, so it was pretty much her fault. Lauren smiles as though that makes sense. So Arie made a “safe decision” for his future and then instantly knew he made the wrong decision. Once he had confirmation from Lauren that she would take him back, he broke up with Becca. Now, he loves Lauren again. And she wants to be engaged. Just like that.

Chris Harrison bravely calls five of Arie’s ex-girlfriends to the stage to share their thoughts. Needless to say they were not particularly impressed with Arie. Caroline, who has done an A+ job prolonging her fame by calling out Arie at every occasion, thinks he’s a big meanie. Bekah calls him “incredibly manipulative” and “ridiculous.” Seinne was horrified that Arie threw out his relationship with Becca like it meant nothing. Bekah said that if he didn’t love Becca, he shouldn’t have proposed. Even Chris Harrison admits that Arie made “a bone-headed error.” Since at least a few of the women are still under contract with The Bachelor and its spin-offs, it’s a little disingenuous when Chris Harrison asks them whether or not they should have aired the excruciating breakup. Kendall claims the women all know their relationships are public on The Bachelor and that it was good to see how strong Becca was in the situation. Um, sure. When Chris Harrison asks the women what they want for Lauren and Arie, Bekah says, “I hope Lauren gets out of there as soon as possible!” and the audience erupts in cheers.

Becca graciously agrees to share her experience with the home audience. Chris Harrison asks her to tell him where it hurts. She smiles and says it has been hard, but it’s all part of her story now. He tells her that strangers on the internet have donated $6,000 to her drink-the-pain-away fund and she instantly donates it to cancer research. When Arie comes out, she allows him to hug her, and accepts his feeble apology. She says she would never want any ill-will for anyone. Nonetheless, some viewers may have been left hoping Bekah, Tia and Caroline would girl-gang up on him and kick him in the shins at least once backstage.

Arie blames Becca for encouraging him to get closure from Lauren, which led to their rekindled romance. Then Arie blames The Bachelor for feeling pressured to make a decision. To speak to that, Chris Harrison invited Bachelor Jason and Molly Mesnick on stage. Jason famously dumped Melissa Rycroft to marry his runner-up Molly. Jason and Molly agree that it should have been done in private and Chris Harrison shrugs while the thought bubble above his head says, “Ratings, man!” Arie says that he didn’t watch the show last night, because he didn’t want to have to see his “bad decision.”

Lauren joins Arie on stage and they say they are in love and their love is stronger than ever and they have moved past his little mistake. (Hopefully Becca is somewhere far, far away where she can’t hear this malarkey.) Then Arie gets down on one knee and proposes to Lauren. He slips a massive ring on her finger. Arie’s family and Lauren’s family sit in the audience and clap politely. Chris Harrison congratulates them and can’t help but hope this engagement lasts a little longer.

And The Bachelorette Is…

The Bachelorette is coming back for another dramatic season this spring and they are going to need a star. And that star is… Becca. At least that explains why she was so darn nice to Arie. 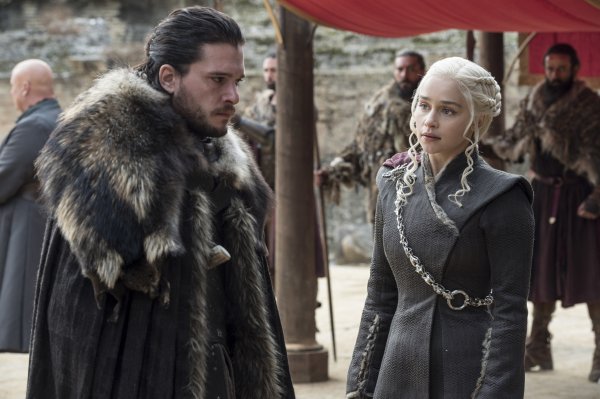 Real-Life Drinking Buddies Daenerys Targaryen and Jon Snow Had the Perfect Game of Thrones Outing
Next Up: Editor's Pick