The Second Nor'easter in a Week Is Bearing Down on the East Coast. Here's What to Expect

Out goes one, and in comes another.

The Northeast is weathering another major winter storm — this one dubbed Winter Storm Quinn — just days after a Nor’easter blew howling winds and dumped rain and snow down on its cities and coastlines.

“This is going to be a worse storm (than last week’s), and there’s going to be worse snow involved in this one,” Tom Kines, a senior meteorologist at AccuWeather, told TIME.

The National Weather Service has issued winter storm warnings across the East Coast, including in and around major cities like New York, Philadelphia, Boston and Portland, Maine. Six to 12 inches of snow is expected on Wednesday for much of the region, though some areas could see as many as 18 inches. Winter storm warnings last until the early hours of Thursday morning, when the intense weather will likely weaken.

The storm is coming from a winter storm system that originated in the Great Plains and began traveling north from the Carolinas on Tuesday evening. Rain began to turn into snow along the East Coast on Wednesday morning. The Philadelphia metro area experienced rain on Wednesday morning that turned to wet snow by the afternoon, bringing as much as a foot of snow to the northern suburbs of Philadelphia, according to the National Weather Service.

In and around New York City, rain and snow began Tuesday night, with some parts of New Jersey and the lower Hudson Valley expected to get a foot by Thursday, according to Weather.com. The storm also brought thundersnow to parts of New York on Wednesday.

Residents will also see heavy wind gusts as the storm intensifies, with winds over 40 mph hitting the Massachusetts coastline and over 30 mph for Maine, Rhode Island and Connecticut, according to the National Weather Service. Aggressive waves along the coast will also cause coastal flooding.

A number of school districts, including Philadelphia, canceled school on Wednesday, though New York City schools remained open. More than 4,000 domestic flights have also been either canceled or delayed, according to FlightAware.

The major storm comes as hundreds of thousands of residents in New Jersey, Massachusetts, Pennslvania, Maine and Maryland were still without power following last week’s Nor’easter, according to NBC News. The Nor’easter — which saw intense conditions in the form of a bombogenesis — resulted in nine deaths and left 1.5 million homes and businesses without power. Images of the storm showed coastlines in Boston and Long Island flooding with water, and commuters in major cities clinging onto their umbrellas.

The two storms early this month come after East Coasters got a taste of spring with mild temperatures and light rain in the end of February. Indeed, big storms at the end of the winter season are not unusual on the East Coast. Last year, a March storm buried some cities in the northeast buried in more than two feet of snow.

“March can be a very cruel month,” Kines said. “You get those spring teases then winter returns.” 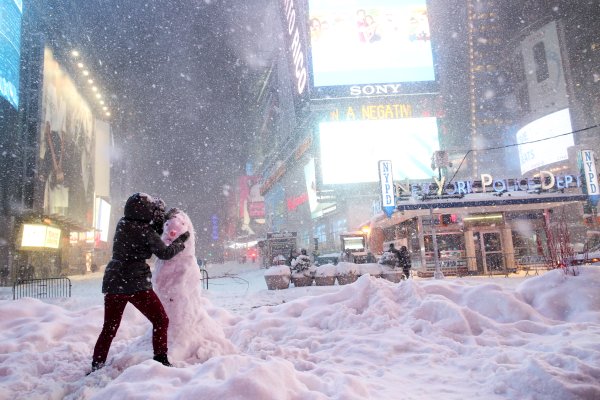 A Major Storm Is About to Pound the Northeast
Next Up: Editor's Pick