The news coverage reads like the beginning of an Ian Fleming novel.

Sergei Skripal, a former Russian double agent convicted of spying for Britain, is lying critically ill in a U.K. hospital, after he and his daughter were exposed to an “unknown substance” on Sunday.

Skripal, 66, a retired colonel who was convicted by Russian authorities in 2006 of spying for MI6, was part of a 2010 “spy swap” between the U.S. and Russia, similar to the one depicted in the 2015 film Bridge of Spies, starring Tom Hanks and Mark Rylance.

Skripal and his 33-year-old daughter, Yulia Skripal, are now both fighting for their lives, after they were discovered unconscious on a bench at a shopping centre in Salisbury, England. Skripal’s wife, son and older brother have all died in the past two years, the BBC reports.

The Kremlin has denied all knowledge of the incident, and has chided the British media for appearing to suggest that Russian agents are to blame. “It didn’t take them long,” said Dmitry Peskov, a Kremlin spokesman.

The incident is just the latest in a series of Russian-linked deaths or apparent assassination attempts that have taken place on British soil. The weapons of choice often seem straight out of a spy thriller; one man was poisoned with a cup of tea, another with the tip of an umbrella. Here are more famous cases.

People attend a commemoration service marking 35 years of the dead of Georgi Markov, a bulgarian disident killed in London in 1978, in a church in Sofia on September 11, 2013. Bulgaria is set to close a 35-year probe into the spectacular "umbrella killing" of dissident Georgy Markov in London in 1978, the prosecution in Sofia said Monday. Markov's murder has gone down as one of the most daring and extraordinary crimes of the Cold War. The prominent journalist and playwright fled communist Bulgaria in 1969 for Britain but continued to lambast the regime in reports for the BBC and Radio Free Europe.
AFP—AFP/Nikolay Doychinov/Getty Images

In September 1978, Georgi Markov, a Bulgarian dissident and a journalist for the BBC World Service, was waiting for a bus on Waterloo Bridge in London, England, when he was jabbed in the back of a leg with an umbrella. He quickly fell ill and was admitted to hospital, where he tried to tell members of staff that he had been poisoned by the KGB, the Soviet Union’s main security agency.

The tip of the umbrella had been laced with ricin, a deadly poison, and Markov later died. Decades later, similarities were drawn between Markov’s murder and the assassination of a man in Hannover, Germany, who was stabbed with an umbrella tip coated with mercury in 2012.

In this image made available on November 25, 2006, Alexander Litvinenko is pictured at the Intensive Care Unit of University College Hospital on November 20, 2006 in London, England. The 43-year-old former KGB spy who died on Thursday 23rd November, accused Russian President Vladimir Putin in the involvement of his death. Mr Litvinenko died following the presence of the radioactive polonium-210 in his body. Russia's foreign intelligence service has denied any involvement in the case.
Natasja Weitsz—Getty Images

A cup of English tea may seem innocent enough. But in 2006, Alexander Litvinenko, a former Russian spy, met his downfall after reportedly sipping on tea laced with a rare radioactive isotope, polonium-210.

Litvinenko, 43, had been living in Britain after criticizing the Kremlin, and, it later emerged, had been on the MI6 payroll. On Nov. 1, he took tea at the Millennium Hotel in Mayfair, central London, with two former Russian agents, Andrei Lugovoi and Dmitri Kovtun.

He died a few weeks later in a London hospital. In an interview with the BBC, his widow said he blamed the Kremlin, and claimed that Russian President Vladimir Putin was personally responsible for “everything that happened to him.”

British police also found traces of radioactive polonium at his home in north London, a sushi bar, and the hotel. A 2016 inquiry later found Lugovoi and Kovtun responsible for the poisoning of Litvinenko.

Boris Berezovsky addresses the media outside the Royal Courts of Justice after losing his lawsuit against Chelsea FC owner Roman Abramovich on August 31, 2012 in London, England. Berezovsky sued Abramovich for billions of pounds, claiming he was "intimidated" into selling shares in oil group Sibneft at below market value.
Warrick Page—Getty Images

Berezovsky, a Russian power broker and former mathematics professor who accumulated great wealth during the breakup of the Soviet Union, fled to Britain in 2000 after criticizing Vladimir Putin. He became a popular figure in British society, finding friends among the House of Lords, The Independent reports.

However, Berezovsky continued his campaign against his one-time friend, Putin. He was a patron of emigres like Litvinenko, whom he paid to gather evidence of Russian corruption.

In March 2013, Berezovsky’s campaign came to an abrupt end when he was found hanged in the locked bathroom of his former wife’s mansion in Berkshire, England.

The 2014 British inquest into Berezovsky’s death was ultimately inconclusive, as the coroner unable to confirm whether it was suicide or murder. However, Bernd Brinkmann, a German professor whose specialized in hanging and asphyxiation cases, told the inquest he believed that two people would have had to have been involved in the hanging, and suggested that Berezovsky may have been attacked prior to his death, The New York Times reports. 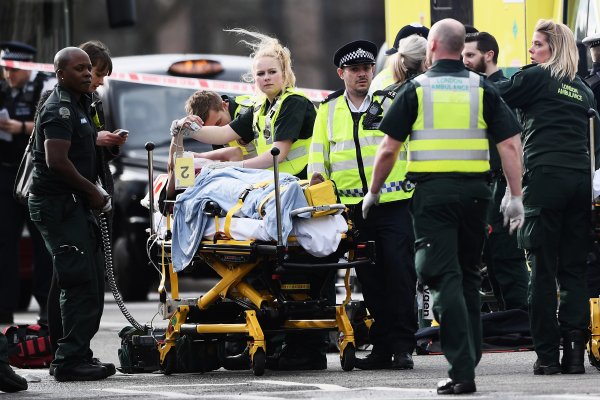 'We Fear Further Violence.' Far-Right Terrorism Is Growing in the U.K.
Next Up: Editor's Pick