Let’s all have what she’s having. What Frances McDormand is having, that is. The Best Actress Oscar winner has been taking the awards circuit by storm this season, coming out on top with her golden statuette at Sunday night’s 90th Annual Academy Awards — and rousing the house with a powerful acceptance speech intended to draw attention to the women in the audience.

She followed up her big win by celebrating backstage, too, and giving fellow winner Allison Janney the chance to taste her tequila cocktail in a fit of gracious generosity.

While Janney was being interviewed about her Best Supporting Actress accolade for her turn as Tonya Harding’s tough mom in I, Tonya, McDormand happened to saunter by behind them. Naturally, the reporter snagged her to join their chat.

“Cheers, darling,” McDormand drawled in a faux accent to Janney. “Have a little sip, have a little sip, it’s tequila,” she continued, offering up her cocktail to Janney and getting her to sip from the straw before turning around to hug the reporter. When the reporter congratulated her for her speech, McDormand seemed to brush it off. “Well, you know, we know, it’s theater, don’t we?” she said rather dramatically, before continuing on her merry way — probably off to find the party, or at least a tequila refill. Cheers indeed.

You can watch the interaction at about the 2:30 mark in this ABC clip. 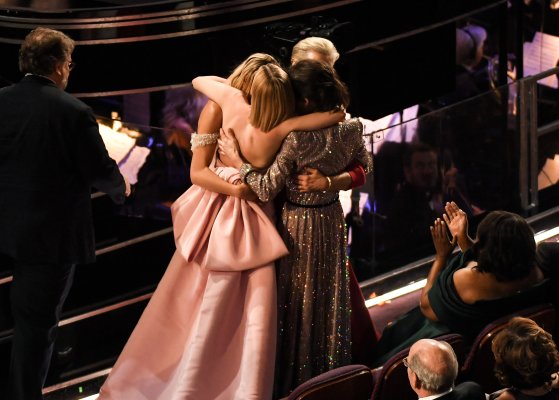 The Best Actress Nominees Hugged it Out in the Sweetest Oscars Photo Ever
Next Up: Editor's Pick