After arguing that trade wars were good over the weekend, President Donald Trump dismissed the idea that the U.S. is gearing up for a trade war over proposed aluminum and steel tariffs on Monday.

Speaking to reporters in the Oval Office, Trump said that the Administration would not back down from the proposed tariffs in spite of heavy criticism from the world community and Republican lawmakers.

Last week, Trump announced plans to impose a 25% and 10% tariff on imports of steel and aluminum, respectively. The president’s policy proposal has not been formally outlined yet.

The announcement sent a shock through the stock market and brought threats and rebukes from key U.S. allies. “Should restrictions be imposed on Canadian steel and aluminum products, Canada will take responsive measures to defend its trade interests and workers,” Canada’s minister for foreign affairs, Chrystia Freeland, said in a statement after the announcement.

“Tariffs on steel and aluminum are a tax hike the American people don’t need and can’t afford,” he said. “I encourage the president to carefully consider all of the implications of raising the cost of steel and aluminum on American manufacturers and consumers.”

In response to criticism that had been lobbed his way, Trump tweeted on Friday that a trade war could be good for the U.S. and easy to win, something analysts and politicians have disputed.

Trump continued his Twitter tirade over the weekend and into Monday, singling out car imports from Europe and trade agreements with Mexico and Canada.

Lawmakers and former White House officials have continued to dispute Trump’s stance on a potential trade war. On Monday,a spokesperson for House Speaker Paul Ryan said he was “worried about the consequences” of one and encouraging the White House to reconsider. Republican Sen. Jeff Flake said such wars are “not won, only lost.” But the president said Monday he will not back down, though he added that Canada and Mexico could face exemptions if the two countries agree to renegotiate the North American Free Trade Agreement. 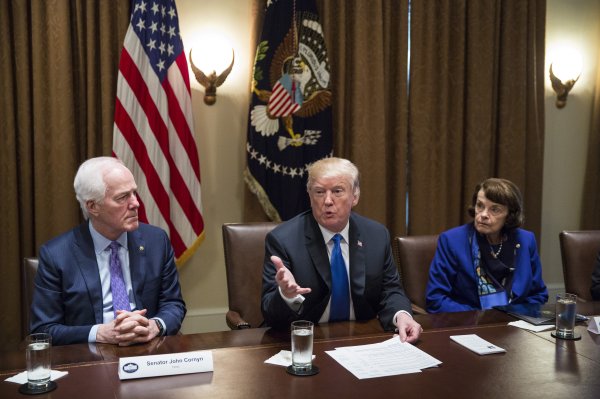 Trump Claims the U.S. Has a Trade Deficit With Canada. That's Not So Clear
Next Up: Editor's Pick