'Cryptocurrency' and 'Dumpster Fire' Were Officially Added to the Dictionary

The cryptocurrency craze has gotten big enough that a major dictionary is weighing in. Among the hundreds of new words and definitions added to Merriam-Webster’s ranks on Monday were several related to these digital tokens, along with many other terms that reflect the current obsessions of English-speakers (See: kombucha).

The additions related to crypto — a slang word that many use to refer to cryptocurrencies — signal how much confusion there is around how this budding branch of finance works. As the values of many coins have exploded in recent years, average Americans have been seeking out information about cryptocurrencies themselves, as well as coin “offerings” and the underlying blockchain technology.

It’s complicated, and some of the definitions from Merriam-Webster are, accordingly, a mouthful.

cryptocurrency (n.): any form of currency that only exists digitally, that usually has no central issuing or regulating authority but instead uses a decentralized system to record transactions and manage the issuance of new units, and that relies on cryptography to prevent counterfeiting and fraudulent transactions

initial coin offering (n.): the first sale of a cryptocurrency to the public conducted for the purpose of raising funds (as to support a start-up)

blockchain (n.): a digital database containing information (such as records of financial transactions) that can be simultaneously used and shared within a large decentralized, publicly accessible network; also: the technology used to create such a database

No doubt some will quibble with these summaries, given that the language used to talk about crypto is still very much debated. But the definitions are a starting point.

Here is a selection of other words that the Springfield, Mass.-based dictionary has now defined.

antifa (n.): a person or group actively opposing fascism or an anti-fascist movement (Read a more in-depth explanation on Antifa from TIME here.)

Bitcoin (n.): a digital currency created for use in peer-to-peer online transactions

glamping (n.): outdoor camping with amenities and comforts (such as beds, electricity, and access to indoor plumbing) not usually used when camping

hate-watch (v.): to watch and take pleasure in laughing at or criticizing (a disliked television show, movie, etc.)

mansplain (v.): to explain something to a woman in a condescending way that assumes she has no knowledge about the topic

subtweet (n.): a usually mocking or critical tweet that alludes to another Twitter user without including a link to the user’s account and often without directly mentioning the user’s name

unicorn (n.): a start-up that is valued at one billion dollars or more

Yorkie-poo (n.): a dog that is a cross between a Yorkshire terrier and a poodle and especially a miniature or toy poodle 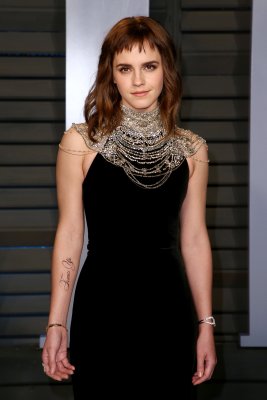 Emma Watson Showed Off a Time's Up Tattoo at the Oscars Afterparty
Next Up: Editor's Pick