The actress gave an emotional speech before asking every female nominee in the audience across all categories to stand. McDormand then gave an impassioned plea for Hollywood to tell more female stories.

“So I’m hyperventilating a little bit so if I fall over pick me up cause I got some things to say,” McDormand joked at the beginning. “I think this is what Chloe Kim must have felt like after she did back to back 1080s.”

McDormand continued, “We all have stories to tell. Invite us into your offices and we’ll tell you all about them.”

She ended her speech with two words: “inclusion rider.” According to Dr. Philip Goff, President of The Center for Policing Equity, an inclusion rider is “a clause in an actor’s contract that requires the cast and crew be diverse in order to retain the actor.”

Host Jimmy Kimmel joked after, “I hope she wins an Emmy for that speech because that was unbelievable.”

The actress was up against Meryl Streep for The Post, Saoirse Ronan for Lady Bird, Margot Robbie for I, Tonya and Sally Hawkins for Shape of Water.

McDormand was the frontrunner leading up to the show as she swept the major awards in the months before. The veteran actress picked up the Golden Globe, Screen Actors Guild and BAFTA awards on her way to claim the big prize.

The actress was bizarrely bleeped during her Golden Globes acceptance speech after the censors were triggered for words like “tectonic shift” and the movie’s studio Fox Searchlight.

The 2018 Oscars ceremony will be held at the Dolby Theatre at Hollywood & Highland Center on March 4 and will be televised live on ABC at 7 p.m. ET/4 p.m. PT. 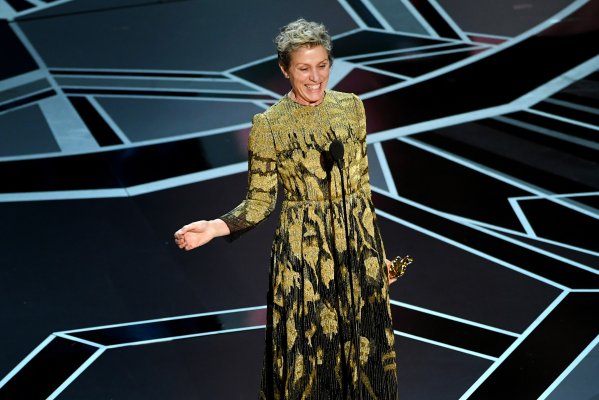 Here's What Frances McDormand Meant by 'Inclusion Rider' in Her Oscars Speech
Next Up: Editor's Pick