China's Annual Parliament Has Rarely Felt Like Such a Charade

Overshadowing China’s highly choreographed annual parliament, held at Beijing’s cavernous Great Hall of the People, is the looming abolition of the two five-year terms limit of the presidency. This means the incumbent Xi Jinping — already China’s strongest leader for generations — could effectively rule for life should he wish.

The move — to be rubber-stamped by delegates this week — gnaws away at the legitimacy claimed by institutionalizing power around the ruling Chinese Communist Party (CCP) that events like the NPC symbolizes. It also raises serious questions regarding the continued smooth governance of the world’s number two economy given that blind veneration of Xi is increasingly necessary for officials’ career advancement.

These are times that conjure dark memories of demagoguery under Mao Zedong, founder of the People’s Republic, whose highly personalized rule unleashed hardships like the Great Leap Forward and Cultural Revolution, which claimed tens of millions of lives between them.

It was largely owing to these calamities that Deng Xiaoping — the architect of China’s economic revival — instituted reforms in the 1980s to spread power amongst various leadership roles, particularly across the apex executive body of the Politiburo Standing Committee (PSC). Term limits and retirement ages galvanized the supremacy of the party over any individual. “To build the fate of a country on the renown of one or two people is very unhealthy and very dangerous,” warned Deng.

That Xi has cast this lesson aside is striking. He was sent down to the countryside during the Cultural Revolution, reduced to digging fields, emptying latrines and sleeping in a cave infested with insects. (He once even fled back to Beijing before being forcibly returned.) In addition, Xi’s father, Xi Zhongxun, who was repeatedly purged under Mao, was rehabilitated under Deng and played a leading role in spearheading economic reforms in China’s now-wealthy southern province of Guangdong.

Today, perversely, Xi’s suffering under Mao’s cult of personality is being used to buttress his own. Liangjiahe village in Shaanxi province, where Xi was sent down, has been turned into a theme park in his honor that welcomes 5,000 people daily. Visitors tour the caves where the teenage Xi once lived and examine the biodiesel generator he helped install. It’s become an obligatory stop for junior CCP officials, who must write papers on the president’s youthful struggles to stand a chance of advancement.

“The Chinese people are very lucky to have Xi,” Yuan Hai Hong, 34, a secretary for a state-owned enterprise in Guangdong, told TIME during a visit to Liangjiahe late last year. “This place is very tough, the life here is very tough, so it made him a good leader because it connected him to the common people. We want him to stay longer than just five more years.”

Xi is certainly popular, chiefly due to a sweeping anti-corruption campaign that has punished more than one million officials, tackling a social cancer that his predecessors allowed to run rampant. But the impending removal of term limits has sparked opposition amongst liberals and, in turn, a flurry of censorship. The phrases “I disagree,” “personality cult,” “Animal Farm” after the dystopian George Orwell novel, “emigrate” and “Xi Zedong” have all been blocked from search results on China’s Twitter-like Weibo microblog, according to China Digital Times.

“If the international community views China through an increasingly negative lens, and if criticism from Chinese liberal intellectuals, rival political elites, and the Chinese citizenry gains steam, the result may be a leadership split and political instability in China,” write China specialists Cheng Li and Ryan McElveen for the Brookings Institute.

Some Chinese citizens with whom TIME spoke expressed concerns about the term limit removal, with grim jokes about Mao-era despotism and even becoming the new North Korea. Respected former state newspaper editor Li Datong called the removal of term limits “a farce” in an open letter, while prominent businesswoman Wang Ying took to the WeChat messaging app to denounce the proposal as an “outright betrayal.” Meanwhile, state media has gone into overdrive, promoting scrapping term limits as “backed by the grassroots” and condemning Western democracy as “ulcerated.”

The risks are stark for Xi, whose consolidation of power entails becoming the primary focus of discontent should the economy slump or other crises manifest. At the NPC, a flurry of typically cheery news attempted to shape the news agenda away from the scrapping term limits hot potato. Premier Li Keqiang’s annual Work Report announced a ruddy growth target of 6.5% for the coming year, 800 billion yuan ($125 billion) in tax cuts and at least 11 million new jobs, with the unusual focus on unemployment figures “an interesting development,” says Tom Rafferty, China manager at The Economist Intelligence Unit. “In the coming years this measure is likely to increase in importance, with the measure of GDP growth slowly becoming less prominent,” he adds.

But the burning question remains: how long does Xi intend to remain in power? Some believe there are clues in his three-and-a-half-hour speech at October’s 19th CCP Congress, where he cemented power by adding his eponymous personal philosophy to the national constitution, and failed to appoint any possible successors to the PSC. Of the many landmark goals within the 34,000 words he uttered at the dais, the magic date for socialist modernization was 2035, by which time Xi would be 82 — and so younger than Deng’s 85 years at his retirement in 1990.

Of course, it’s too early to tell how far Xi will get. But his consolidation of power comes against a background of liberal democracy backsliding and strongman autocracies rising across the globe. It’s also unclear what Xi’s domestic deification will mean for the global order as China grows more assertive on the world stage, especially given the lack of meaningful opposition in Washington.

Speaking to Republican fundraisers on Saturday, U.S. President Donald Trump reportedly remarked of Xi’s scrapping of presidential term limits: “I think it’s great,” before quipping, “Maybe we’ll have to give that a shot some day.” 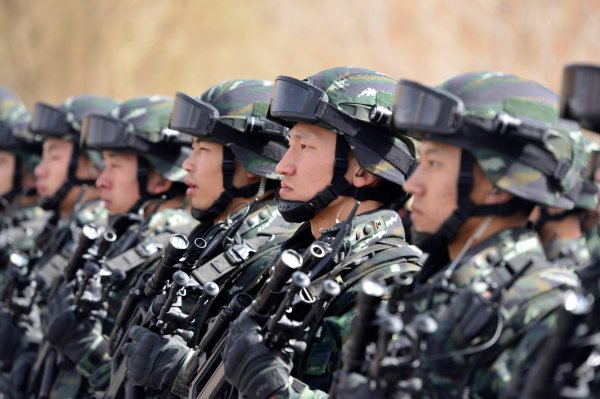 U.S. Journalists Say China Has Detained Their Relatives
Next Up: Editor's Pick