John Oliver took on the National Rifle Association — “a group that feels about guns the way the rest of us feel about Nutella” — on Sunday night’s episode of Last Week Tonight.

In the wake of the shooting at Parkland, Florida high school, Oliver noted that the public pressure is actually working and many companies are dropping the discounts given to NRA members. However, so far, one group has held firm — big tech companies like Amazon, Apple, and Roku have resisted public pressure are all still offering access to NRA TV.

Oliver had one question, though: What is NRA TV? Turns out it’s a channel that produces a lot of videos that are “trolling for your attention.” The channel has spawned odd viral videos starring country musician Charlie Daniels and spokeswoman Dana Loesch talking about the “clenched fist of truth,” as well as series like Media Lab where a gun-loving ex-military man reenacts scenes from his favorite movies, most of which involve bank robberies.

According to Oliver, NRA TV also has an entire group of shows dedicated to luring women into the gun life through things like handbags that can hold a concealed gun and gun-oriented arts and crafts where guns are monogrammed and sprayed fun colors. Shows like Armed and Fabulous are created, because according to one NRA executive speaking in a video clip, “if you get the woman, you get the family.” Another show, Love at First Shot, helps acclimate women to using guns with one episode featuring an arms instructor calling an AR-15 — the gun used in the Florida high school shooting — like “a light poof of happiness.” As Oliver noted, it’s a little odd to describe a semi-automatic weapon the same way Bob Ross describes a cloud.

It’s not all fun with guns, according to Oliver, things on NRA TV get much darker, because the NRA wants to paint a bleak vision of America that has only one solution—guns. As Oliver puts it NRA TV is basically one long infomercial asking questions like: “Do you have ISIS sympathizers in those hard to reach places? Are you tired of getting 9/11-ed?”

In Oliver’s opinion, NRA TV simply isn’t that scary, describing it as the stupid hat sitting on top of an actually frightening bear. “It’s the dumbest most transparent thing it does,” said Oliver. In short, “It’s just a vessel to sell America guns.” 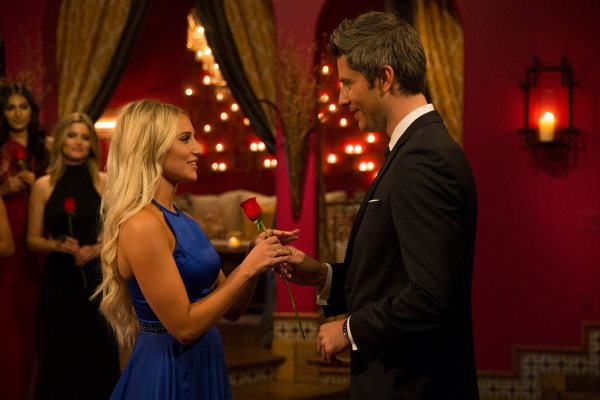 Why People Are So Obsessed With The Bachelor, According to the Woman Who Wrote a Book on It
Next Up: Editor's Pick