The Nor'easter Is Causing Serious Flooding In and Around Boston. See What It Looks Like

Winter Storm Riley is pounding the East Coast with gusting wind, heavy rain, and, in some cases, wet snow. Along with these nor’easter storm conditions, Boston and nearby areas are experiencing coastal flooding due to the storm.

At around 11 a.m. local time on Friday a storm surge of 3 feet was recorded, according to local NPR station WBUR. The National Weather Service says high tide cycles could mean “moderate to major impacts” along the coast.

There is a coastal flood warning in effect “from Salisbury to Plymouth,” the NWS reported. “This includes the city of Boston. Damaging impacts are likely for those communities exposed to the open ocean.”

Flooding has been reported in parts of Boston, including the Seaport District, Long Wharf, the North End, and Morrisey Blvd. The MBTA’s Blue Line stop was closed for the day due to flooding, according to NECN. Several school districts are experiencing closings, The Boston Globe reports.

“As we saw with the coastal flooding in the Seaport in January, there is a need to proactively plan for our changing climate, which is why we’re integrating climate resilience into all aspects of city planning moving forward, beginning with a Climate Ready project in South Boston,” Boston Mayor Marty Walsh told NECN.

Flooding is also being reported in other areas of Massachusetts, including Quincy and Duxbury. There are flood warnings for extended portions of the East Coast from Maine to North Carolina, according to Weather.com.

The current nor’easter has the potential to be worse than January’s storm, according to Quartz. 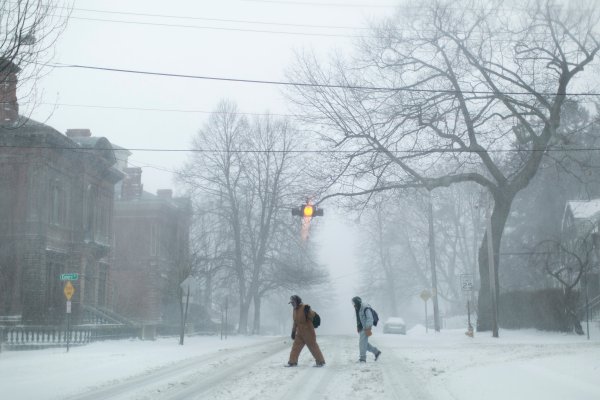 This Photo Shows How Massive the Nor'easter Looks From Space
Next Up: Editor's Pick