This Photo Shows How Massive the Nor'easter Looks From Space

Winter Storm Riley, a powerful nor’easter wreaking havoc on the Northeast, transformed into a massive bomb cyclone Friday. But the storm looks even more massive from space.

Those who doubted the winter storm was big only need to look at satellite imagery of Winter Storm Riley sweeping through the East Coast to realize its severity. NY Metro Weather meteorologist John Homenuk shared a photo of what the storm looks like from space on Twitter Friday — captioning the photo with only two words: “Oh wow.”

The storm brought a mix of rain, snow and heavy winds everywhere from North Carolina to Maine, with heavily-populated cities including New York, Washington, D.C., Philadelphia and Boston all in Winter Storm Riley’s path. Coastal residents have braced themselves for flooding, while those in Cape Cod are anticipating possible hurricane-strength winds of 80 MPH to 90 MPH.

Several cities were also covered with a fresh blanket of snow Friday — with areas south of Boston and up to Rhode island forecast to receive up to 5 inches of snow from the storm, the Associated Press reports.

The intense Nor’easter was strengthened thanks to “bombgenesis,” a similar weather phenomenon experienced by the Northeast in January when a so-called “bomb cyclone” hurled forceful winds and snow amid freezing temperatures. A bombogenesis describes a rapidly developing storm that results from a drop in atmospheric pressure of at least 24 millibars.

In anticipation of the Nor’easter, several U.S. airlines, including JetBlue, American Airlines, Delta and Southwest, have waived change or cancel fees for customers traveling through affected cities, including New York, Philadelphia and Boston. 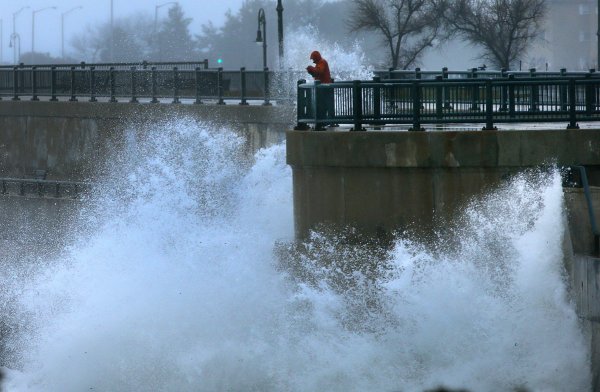