President Donald Trump has defended his proposed steel and aluminum tariffs in an early morning tweet, stating that trade wars are “good, and easy to win.”

“When a country (USA) is losing many billions of dollars on trade with virtually every country it does business with, trade wars are good, and easy to win,” Trump tweeted on Friday morning.

“Example, when we are down $100 billion with a certain country and they get cute, don’t trade anymore-we win big. It’s easy!” he added.

Trump announced the duties on Thursday during a White House meeting with the country’s biggest steel and aluminum manufacturers, where he said he would impose a 10% tariff on aluminum and a 25% tariff on steel, The Wall Street Journal reports. The move is intended to counteract the foreign steel and aluminum that currently saturate the market.

“Aluminum has been decimated in this country,” Trump said. “We’re bringing it back.”

The President’s tweeting did little to alleviate investors’ concerns regarding Trump’s plans. The Dow Jones Industrial Average has yet to regain lost ground after dropping more than 400 points on Thursday following Trump’s announcement.

Trump’s comment about “a certain country” in his latest tweet appears to reference China, whose expansions in the steel industry have caused a global glut and driven prices down. 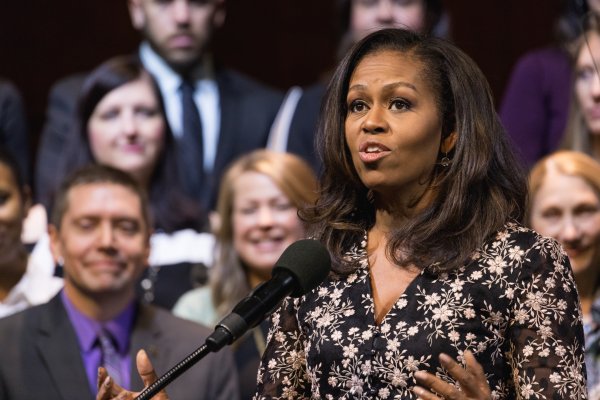 Michelle Obama: Change Comes From People, Not Politicians
Next Up: Editor's Pick