A view of a University of Miami entrance sign is seen on campus of the Miami Hurricanes on Feb. 9, 2013 in Coral Gables, Florida.
Lance King—Replay Photos/Getty Images
By Katie Reilly

Sororities at the University of Miami and the University of Pittsburgh have been suspended this week amid investigations into potential hazing violations — developments that follow a year in which alleged hazing deaths rattled fraternities across the country.

The Delta Gamma chapter at the University of Miami was suspended after the Dean of Students Office received reports that the sorority had violated alcohol and hazing policies, the university said.

“Given the very serious allegations and the University’s zero tolerance for hazing, the Delta Gamma Chapter was issued a cease operations order,” the university said in a statement. “A thorough investigation will be conducted by the Dean of Students Office to determine if the organization and/or individual members violated any university policies. Anyone or any organization found responsible for violating any policies will be held accountable.”

The chapter became known in 2016 for a lavish recruitment video, which featured members waterskiing and surfing, dancing on rooftops and jumping off sailboats.

Hazing has been a longstanding problem within Greek organizations, and reports of dangerous or deadly hazing within fraternities tend to outnumber those within sororities.

The Alpha Kappa Alpha sorority chapter at the University of Pittsburgh was also suspended this week, as the university and local police investigate hazing reports. A dozen sorority pledges told police about a possible hazing incident after a mother noticed bruises on her daughter that might have been caused by paddles, the Associated Press reported.

“This most recent incident, involving Alpha Kappa Alpha, is an opportunity for me to be clear about our zero tolerance for hazing at Pitt,” Dean of Students Kenyon Bonner said in a letter to the Greek community on Wednesday. “As a community, we must actively respond to these types of behavior — and our response must extend beyond words and sanctions. We must all step up, speak up and accept the challenge of defining or even redefining our community.” 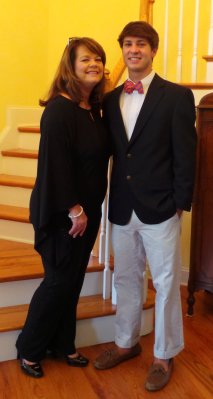 Parents of Fraternity Hazing Victims Come Together for the First Time: 'We Don't Want Any More Kids to Die'
Next Up: Editor's Pick