The S&P 500 Index sank to session lows and fell below its 100-day moving average, while the Dow Jones Industrial Average dropped more than 500 points after the U.S. president added to earlier confusion on the fate of proposed tariffs by announcing the levies in a meeting with industry executives. The Institute for Supply Management called the proposal a “big mistake.” The Federal Reserve earlier praised the benefits of trade, while the European Union has said it could respond in kind to any new tariffs.

The market reaction was uneven. While industrial companies in the benchmark equity index tumbled, U.S. Steel Corp. advanced 7 percent and steel-products company Nucor Corp. gained 3.1 percent. Automakers led decliners as Ford Motor Co. and General Motors Co. added to losses already sparked by weak sales numbers. The Russell 2000 Index posted the smallest loss among major indexes as the bulk of its members derive most of their sales in the U.S.

“You could see earlier in the day when investors thought the president was going to have a listening session regarding tariffs the market went positive,” Quincy Krosby, chief market strategist at Prudential Financial Inc., said by phone. “All of those stocks that have steel or metal, they slid up. Then of course when he announced tariffs you saw the market pull back.”

The news sparked a bout of volatility, with the Cboe’s VIX measure climbing past 23 from less than 20 earlier. The Canadian dollar retreated 0.4 percent versus the greenback, which pared earlier gains to trade little-changed versus the yen. Mexico’s peso fell.

Investors also digested Senate testimony by Fed Chairman Jerome Powell, who called for gradual interest rate hikes and said he doesn’t see evidence of the economy overheating. Traders were on edge during Powell’s second day of Congressional testimony after his comments on Tuesday about the strength of the U.S. economy opened the door to speculation that the Fed plans to quicken the pace of monetary tightening, a move investors worry could derail growth.

Elsewhere, the Stoxx 600 Index fell as some companies missed their earnings estimates and manufacturing data showed that growth may have peaked. The U.K. pound was flat after the European Union published a draft Brexit treaty, squaring off with Prime Minister Theresa May. The Australian dollar dropped after business investment unexpectedly fell in the final three months of last year. 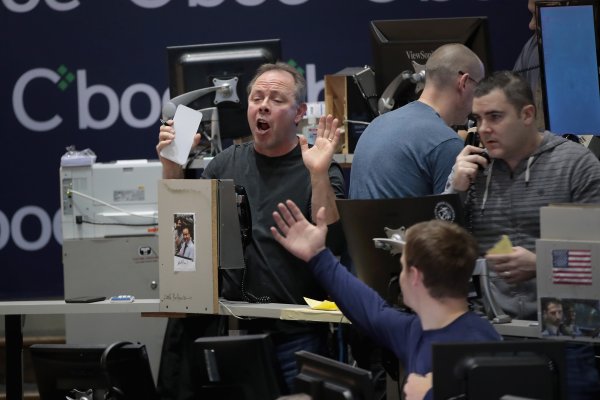 Stocks Recover From Rout With Best Day Since 2016
Next Up: Editor's Pick