A circa 1950s photo of publishers of the Los Angeles Tribune Lucius and Almena Lomax, parents of Michael Lomax, setting the typeface to print the newspaper.
Courtesy of the Lomax Family
By Olivia B. Waxman

At the 90th Academy Awards on Sunday, at a time when women in Hollywood are helping to drive the national conversation about sexual harassment in the workplace, the question of how the #MeToo and Times Up movements will show up on the red carpet is as relevant as the question of who will win. But, though other events of this year’s Hollywood awards season have been preceded by announced protest plans, there’s a reason why such has not been the case for the Oscars.

But those decisions about the relationship between movies and activism aren’t new. “Every year we have this amnesia about what’s happened in the past,” Ellen C. Scott, assistant professor and vice chair of Cinema and Media Studies at the UCLA School of Theater, Film and Television, says.

One thing that is new is the set of resources and technology that today’s activists can use to get their message out. Their predecessors often had to work even harder to be heard. One example of that phenomenon was Almena Davis Lomax. In 1941, in part to address that problem, she ended up founding a whole newspaper, the Los Angeles Tribune. “She was a woman whose career as a journalist was constrained both by her race and her gender,” says her son Michael L. Lomax, who is now President and Chief Executive Officer of the United Negro College Fund. “She had to sharp-elbow her way into journalism, and she did that — happily.”

The paper drew a prominent readership from not only black radicals such as Langston Hughes, but also white radicals such as Dalton Trumbo. Martin Luther King Jr. himself would say her writing on the Montgomery bus boycott was “journalism at its best,” rendering a “great service for our cause” in a July 5, 1965, letter to her. But the paper’s coverage of political and cultural issues relevant to the local African-American community was where it stood out most. Of course, since it was based in Tinseltown, that included what Hollywood was doing — or more accurately, wasn’t doing — in terms of fairly depicting African Americans on screen.

“Mother was very concerned about the portrayal of black women,” says Michael Lomax. She was frustrated by the “stereotypical romanticizing of some older image of black folks, as happy servants and contented slaves,” and black women as “oversexed and primitive,” and black men as “brutal figures” and the black community in general as full of promiscuous gamblers and drug addicts.

“She was the most consistent picketer of Hollywood films of any Black activists of the Hollywood era,” Scott writes in her book Cinema Civil Rights: Regulation, Repression, and Race in the Classical Hollywood Era.

She objected to The Little Colonel (1935) and Rainbow on the River (1936) because black actors Hattie McDaniel and Louise Beavers played black women who didn’t want to be free, and, with Leon Washington of the Los Angeles Sentinel, she picketed the movie Tales of Manhattan (1942) for depicting African Americans as ignorant sharecroppers, according to Scott. Signs used during the protest read “Hollywood, take your feet off the Negroes’ neck” and “March on Washington Movement–West Coast Branch,” in a reference to the activists then advocating for the desegregation of the armed forces.

She also spoke up against the 1959 movie Imitation of Life, starring Lana Turner. The plot involves the light-skinned daughter of a black single mother who wants to pass as white, and who is beaten by a male suitor when he learns about her background. “This scene is not only a libel against the Negro, it is a libel against white America,” Lomax wrote in her review of the film. “The Imitation of Life lies in the false notions of color and racial superiority of the white man.”

On Feb. 2, 1959, Lomax announced she would picket the movie, in a statement that the Hollywood Reporter picked up: “Imitation of Life…is a libel on the Negro race,” her message said. “It libels our children and the Negro mother [and] should be banned in the interest of national unity, harmony, peace, decency and inter-racial respect.”

But, just as today’s Time’s Up advocates have said that their work must go beyond the red carpet, Lomax was not satisfied holding a mirror up to Hollywood. She wanted to do the same for the rest of the world, too.

She shut down her paper in the early 1960s and headed east to cover the Freedom Riders who were participating in the desegregation of public transport in 1961 under the leadership of Martin Luther King.

Her sharp, biting commentary even made its way into the Letters to the Editor section of TIME. After the Watts Riots, the violent clash between police and African Americans in L.A., in August of 1965, she wrote that “white people missed the point of the riots, which guarantees that they will happen again.” Many times her views rendered her an “outlier,” says her son Michael, from telling Dr. King that his protests were too peaceful to telling TIME in another letter in the editor that Jacqueline Kennedy’s clothes were “ridiculous.” She also aimed her sharp wit at racism she saw in the mainstream Women’s Lib movement, calling it “a frivolous bid for attention by the most privileged and coddled women in the world who don’t know when they are well off,” in a 1973 Ebony oped. White women “want to get out of their kitchens,” she wrote, “We want to get out of their kitchens!”

“[As] a proto black feminist she was ahead of her time. Social media would have been perfect for her because she wouldn’t have been muted. But I don’t think she would have been living comfortably. She would have been pushing boundaries,” Lomax says. “She would be on the side of the women, obviously, but I think she’d also be telling the story of women of color who have been not always as clearly identified as both initiators of this movement and victims of the male-dominated industry.” 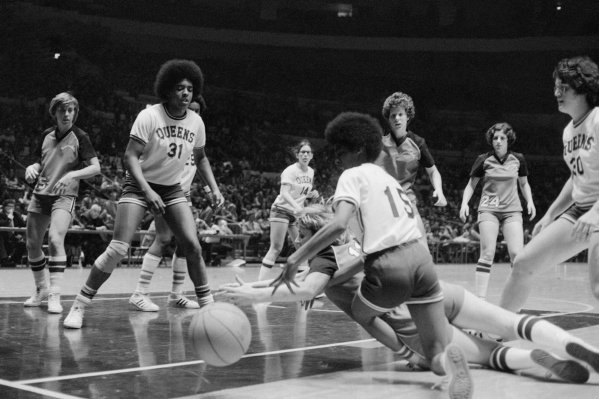 She Exposed the Discrimination in College Sports Before Title IX. Now She’s a Women’s History Month Honoree
Next Up: Editor's Pick