With Gun Sales Down, the NRA Told Republicans It's OK to Talk About Gun Control

America’s gun control debate has taken seemingly surprising turns in recent days, as President Donald Trump and other Republican Party leaders have signaled an openness to gun restrictions that are anathema to the powerful National Rifle Association. But behind the scenes, the NRA has given Republican lawmakers the green light to float new gun restrictions without the threat of political retribution, according to two senior GOP officials.

Gun manufacturers, who along with the NRA’s grassroots members help fund the organization, are in the midst of the worst business crisis in decades, with sales drops driving some to seek bankruptcy protection. And nothing gooses sales like the threat of new limits on guns.

Jennifer Baker, an NRA spokeswoman, denied that her organization made such overtures to Congress, and said the NRA’s main concern was not gun sales but rather defending gun rights.

Under President Barack Obama, people rushed to buy guns they feared would be outlawed. But as Trump took office, the American gun market was approaching saturation. “Gun owners have what they need,” said Robert Evans of Pennington Capital, a Minneapolis investment firm. “The stockpiling mentality is over.”

Since last month’s deadly mass shooting at a high school in Parkland, Florida, left 17 people dead, Trump and some other Republicans have changed their tune on guns. Trump — who received record-breaking support from the National Rifle Association during the 2016 presidential election — told lawmakers during a live televised meeting Wednesday that they shouldn’t be afraid to defy the NRA. He encouraged them to pass a comprehensive bill that would raise the age limit for purchasing guns from 18 to 21, something the NRA has said it opposes. And he floated the prospect of taking guns away from people who might be dangerous, even before they have a chance to defend themselves in court. “Take the guns first, go through due process second,” Trump said.

Trump also told a recent meeting of governors that it’s time for them to pick a fight with the gun-rights lobby. “Half of you are so afraid of the NRA,” Trump chided. “There’s nothing to be afraid of.”

But he also let slip that he had shared a recent lunch with NRA executives.

–With reporting by Alana Abramson 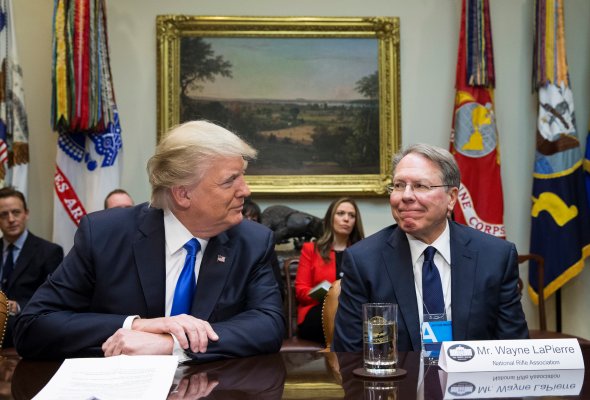 Inside the Republican Party's New Direction on Gun Restrictions
Next Up: Editor's Pick