Robinson, a 2016 TIME 100 honoree, is one of the foremost figures in American letters and the author of 10 books
Alec Soth—Magnum Photos
Ideas
By Sarah Begley

Marilynne Robinson is a dissident, though she may not sound like one. The 74-year-old Pulitzer Prize-winning novelist and acclaimed essayist has made a peaceable career of rejecting commonly held opinions to look for a deeper truth. Her fiction and nonfiction alike have found a home in the hearts of American intellectuals like Barack Obama as well on best-seller lists. She’s a humanist, a Congregationalist, an artist and a student of history, and she makes her readers want to be more thoughtful people.

The essays in her new collection, What Are We Doing Here?, are mostly lectures that she gave at universities. The pieces are erudite, and often long. “I impose on the patience of my audience from time to time,” she tells TIME. “That’s a fact.” And though these lectures critique the “thems” of the world–politicians who exploit their constituents, journalists who reinforce “whatever gimmicky notion is in the air,” academics who lazily repeat the same scholarship–they are written in a way that assumes her reasonable audience will agree with her. “I suppose I don’t know how to write to an antagonistic audience,” she says. “I love questions, and often people ask very basic questions that I shouldn’t assume we agree about. In any case, they are very willing to entertain my ideas.”

Robinson, who has a warm voice and is easy to laugh, has a way of setting the record straight that feels necessary in this “fake news” moment. Her confidence and eloquence can make common knowledge sound uncommonly stupid. For instance, she loves the Puritans and wants people to know they weren’t as, well, puritan as popular history frames them: they didn’t wear black (shocker to anyone whose vision of pilgrims is based on The Crucible); they didn’t carry crosses, which they considered icons; and they were far less theocratic, with far looser rules, than their Anglican and Catholic counterparts in Europe. “The American Puritans were the most progressive population on earth through the nineteenth century at least,” she writes in an essay correcting certain stereotypes about Christian doctrine. She draws direct lines from the universities established by early Puritans to the abolitionists who succeeded in eliminating slavery. If we could get our settlers this wrong, perhaps all of our political and historical groups need re-examination.

And maybe we need to re-examine ourselves. Robinson would like us to reject the notion that Americans are naturally ungenerous capitalists. Social science loves to tell us that we have to trick ourselves into goodness. Robinson thinks this sells us short and that it’s dangerous to our future to keep repeating it. “It is shocking how defenseless the protections of the environment, of the poor and even of the rights of voters have been shown to be in recent years,” she writes. “No one defends these things as American, because the Left no more than the Right thinks of them as among our core values.”

What makes Robinson so special is “her utter seriousness about what she’s doing,” says her longtime editor Jonathan Galassi. “Her Gilead novels are one of the greatest contributions to American fiction, in my lifetime, certainly.” He sees her nonfiction as equally essential: “Marilynne has a very deep understanding of the basis of American culture in religion. And that understanding of our attitudes about right and wrong, and how they’ve played out in our history, is something that we need, that people are very responsive to.”

In 2016, Robinson retired from a long career teaching at the Iowa Writers’ Workshop. She still lives in Iowa, but travels frequently. When at home, she attends church weekly; she was raised Presbyterian, but chose Congregationalism as an adult “because it’s more democratic.” She is long divorced, and she writes in the book of discord between herself and her late mother, fueled in part by her mother’s Fox News fandom. Her experience of family, a frequent topic in her novels, from Housekeeping (1980) to Gilead (which won the Pulitzer in 2005) to Lila (2014), has been “very precious and central and complicated, sometimes bordering on difficult.” Asked what gives her joy, she says, “I have a number of things I could propose. Over my lifetime I’ve become very, very aware of looking at things, just how beautiful and how intricate and elegant the world is. But then I also have grandchildren, I have sons, I have my books, which I adore.”

Robinson’s fiction is as rooted in theology as her nonfiction. Gilead is about a dying minister, John Ames, in 1950s Iowa. Like Robinson, he is a Congregationalist, but the novel has struck a chord with believers and nonbelievers. “It’s been published in Persian, it’s published in Chinese,” she says. “There’s something about religion that transcends the specific circumstances of religion, you know? We’re wrong to think that a religious loyalty precludes finding sympathy with other people who are also religious.”

Yet Robinson is disappointed by the current state of Christianity in America. Reflecting on the fact that Donald Trump captured a larger share of the evangelical vote than Mitt Romney or John McCain, she says, “It just appalls me. I cannot imagine what these people are thinking about. I mean, honestly, every day you read the paper–what is going to happen to the DACA people? They have been roasting over a slow fire for months, for no reason. Deadlines changing, threats floating, all this sort of thing. If there’s one thing the Bible insists on, it is that you are kind to strangers, that you are generous to strangers. They’re not even strangers–they’re us, with a little technical difficulty. How anyone who claims to know anything about the Bible could endure this spectacle, I cannot begin to imagine.”

Robinson sees her politics as an extension of her faith. “I’m perfectly comfortable thinking of myself as a liberal Democrat,” she says. “I wrote about the speech John Winthrop gave on the Arabella, about what the city on the hill should be, and in that speech, the world liberal is used over and over and over again, and it means ‘openhanded.’ As it does also in English translations of the Bible. As a kind of politics, that’s what I mean by liberal.”

Robinson perceives that Christianity is unfashionable in certain circles, and she can see why the behavior of some within her faith have given it a bad name. “When people find something like a religion unfashionable,” she says, “they avoid it in a way that means they know nothing about it, so that whatever offended them becomes the one impression they have, whether it’s a legitimate impression or not.”

Her books offer a different impression of the faith that has played such a large role in her life–and almost played a larger one. “I actually thought about going to seminary after college,” she says. “But in those days, there was a theoretical welcome to women, but in practice you were just marginalized, and ended up writing somebody else’s sermons, that sort of thing. It looked like frustration waiting to happen, so I didn’t do that.”

The America that Robinson loves and respects–the one the Puritans came here to found–doesn’t resemble Trump’s vision for the country. Her ideal is a nation of people who see themselves as “citizens,” not “taxpayers.” “The Citizen had a country, a community, children and grandchildren, even–a word we no longer hear–posterity. The Taxpayer has a 401(k),” she writes. “I know lots of taxpayers, frankly, who would be happy to pay more taxes,” she says. “You can give money to charities, but I want to live in a country where basic rights of everyone are simply acknowledged as part of the life of the whole country. It’s actually against my religion to think otherwise.”

It’s the kind of thinking that makes her a woman after Obama’s own heart. He interviewed her for the New York Review of Books in 2015. “This is a word that people for some reason are uncomfortable with, but he’s really a gentleman,” she says. “His sensitivities to other people’s circumstances and feelings and so on is remarkable.” She has been in touch with him since he left the White House and says he’s “busy” but “as wonderful as always.”

Robinson is keeping busy herself with a fifth novel–she won’t say what it’s about–and she’s preparing an eight-part lecture series to deliver at Cambridge University on Genesis and Exodus. “These great texts have been horribly abused by bad scholarship and criticism, and by fundamentalist ‘defenses’ as well, so I’m going to take another look at them,” she says. The project of questioning entrenched ideas continues.

“I have talked about the fact that it was a joke to say you couldn’t say ‘Merry Christmas,'” she says, laughing. “Go out in the street and try it out! People accept as true things that are available to being tested by their own experience. You know, read the New York Times! It will not do your spirit any harm!” 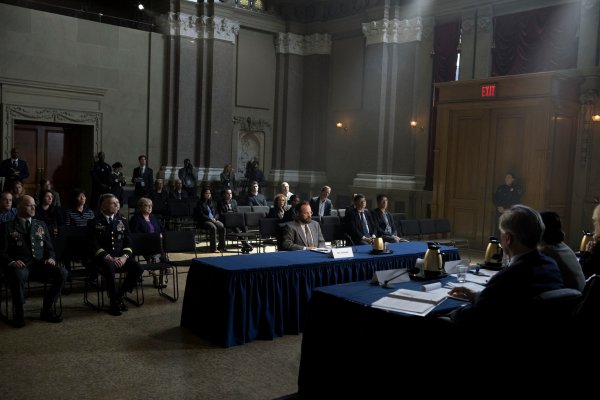 The True History Behind 'The Looming Tower': How the Story Began
Next Up: Editor's Pick