Italy’s Populists Are Stirring Up Anti-Migrant Sentiment to Win Votes. It Could Get Ugly

After the attempted massacre by a new fascist in Macerata, the entire community of migrants and Italians called a demonstration of support for the victims.
Davide Bosco—Pacific Press/LightRocket/Getty Images
By Ian Bremmer

In any country where voting matters, politicians must find an issue emotive enough to drive their voters to the polls. Italy votes on March 4, and immigration has become the dominant election-year controversy.

We shouldn’t be surprised. Unlike those of Spain and Ireland, Italy’s economy hasn’t enjoyed a notable turnaround. It has grown for more than three years, but it needs another six years at the current pace to return to GDP levels last seen before the 2008 financial crisis. The official unemployment rate stands at around 11%. Many Italians say their taxes are too high, their cities are dirty and dangerous, and their politicians are hopelessly corrupt.

Now add the 600,000 migrants who have landed in Italy over the past four years. The flow slowed sharply in the second half of last year, but boats from North Africa still bring refugees across the Mediterranean, particularly from strife-torn Libya.

The most likely election outcome is another of Italy’s famously unstable coalition governments. Silvio Berlusconi–forbidden, as a convicted tax fraudster, from serving another term as Prime Minister–may instead become kingmaker, if asked to decide whether his center-right Forza Italia should ally with the far-right League (formerly the Northern League) or the center-left Democratic Party. Polling suggests the populist Five Star Movement (5SM) is the most popular single party, but it would need one or more far-right partners to lead a government.

Immigration has driven the debate. Berlusconi has called migrants a “bomb ready to explode.” Along with the leaders of 5SM and the League, he has promised his party would deport all 600,000 of them–with no credible explanation of how that could be done, or where they would be sent. Berlusconi also pledges soldiers on the streets to maintain order. Only former Prime Minister Matteo Renzi’s Democratic Party supports a more welcoming approach.

Here as elsewhere, immigration plays well for populists, because those fearful and angry about new arrivals are ready to talk about it. Those who welcome migrants, and those less concerned about the issue, are less noisy. How ugly is the politics? A few weeks ago, a failed Northern League candidate was arrested after six immigrants were shot in a drive-by spree in Macerata, a town northeast of Rome. Italian media reported that, after the shootings, the 28-year-old suspect stepped out of his car draped in an Italian flag, offered a fascist salute and shouted “Italy for the Italians.”

A heated issue has only gotten hotter. The question now is whether whoever leads the country next will be able–or willing–to lower the temperature. 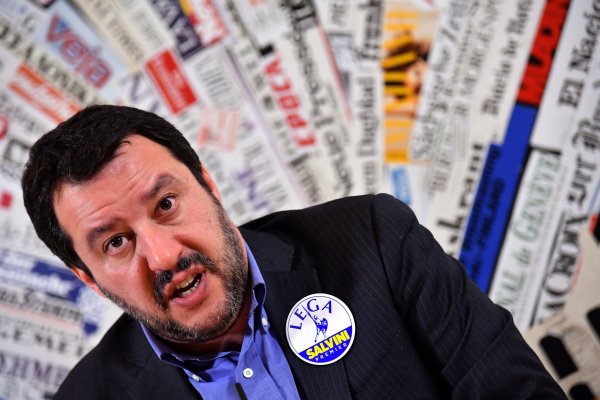 How Anti-Vaxxers Could Help Decide Italy's Election
Next Up: Editor's Pick