In a publicly televised meeting with lawmakers Wednesday, President Donald Trump took a moderate tone on gun control, telling members of Congress that they should not be afraid to defy the National Rifle Association in passing a comprehensive school safety package.

At one point, Trump urged taking guns away from anyone who could be considered dangerous, even before they have to he opportunity to defend themselves in court. “Take the guns first, go through due process second,” he said.

The president’s remarks about the NRA and seizing guns were dramatically different from the tone he struck at the Conservative Political Action conference last Friday, where he spent most of the time talking about arming teachers. During that speech, he barely mentioned strengthening background checks and did not mention his desire to implement a ban on bump stocks or raise the age limit to purchase a weapon.

In his meeting Wednesday, Trump encouraged lawmakers to pass a comprehensive bill that would expand background checks and raise the age limit for purchasing weapons to 21. The NRA has said it opposes raising the age limit for buying guns.

He told Republicans not to incorporate legislation that passed in the House of Representatives last year that would expand provisions for carrying concealed firearms because it would never pass. He also said lawmakers should not bother including a ban on bump stocks — accessories that dramatically increase semi-automatic weapons’ potential rate of fire — because he would enact a ban through Executive Order.

Some of the proposals Trump advocated on Wednesday directly conflict with the views of the NRA, a point Trump seized on. He acknowledged the influence of the NRA, agreeing with other lawmakers who had said their colleagues were gripped by the tentacles of the gun lobby.

But Trump said he was not susceptible to those influences, despite the fact that the organization spent $30 million backing his candidacy. Although he hailed the NRA as “good people” and “patriots,” he told lawmkers: “They have great power over you people. They have less power over me. What do I need?”

At one point, he asked Sens. Toomey and Manchin if they had addressed raising the age limit for buying certain weapons in their proposal. When Toomey said they didn’t address it, Trump replied, “You know why? Because you’re afraid of the NRA.” 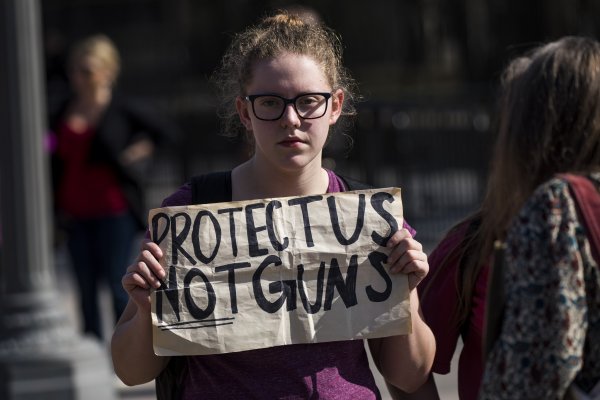 Gun Control Support Has Surged to Its Highest Level in 25 Years
Next Up: Editor's Pick