In this photo illustration, a surge in new users cause technical difficulties for users of the VERO app on February 27, 2018 in Dusseldorf, Germany. Recent changes to Facebooks algorithm, controlling what users see on their newsfeeds, has caused many to sign-up for the app billed as the next Instagram.
Photo by Ant Palmer/Getty Images
By Lisa Marie Segarra

Vero, a new social media network, is all the rage among the digitally-savvy crowd lately. With an ad-free interface, a content feed built around chronological updates instead of an algorithm and a focus on visual content, Vero is on the rise just as frustration with Instagram’s recent changes are bubbling over among that app’s most passionate users.

But Vero’s sudden popularity has also put the company and its billionaire CEO, Ayman Hariri, under the microscope. High among the concerns shared by some would-be users: Several of Vero’s developers are Russian, a potentially distressing fact given Moscow’s recent use of social media to muck about in American politics.

Hariri, who spoke with TIME this week, argues his employees’ nationalities should not be a concern.

“At the end of the day, where people are from is really not how anybody should judge anyone,” Hariri says. “The people that I work with are incredibly talented, dedicated, honest people that really care about the user experience and developing something that has meaning and is well thought out. There’s a tremendous amount of care that pours into what we’re doing. And so it’s completely irrelevant where they’re from. What’s important is the work they do and their commitment to creating a real online social network and not an online network that takes advantage of the fact that people like to be social with one another.”

Hariri says his vision for Vero centers around an advertising- and algorithm-free user experience where users can “feel a connection” with one another and “mimic the real-world social network,” as he puts it.

Of course, a number of would-be social media competitors have cropped up in recent years, only to be swiftly crushed by Facebook, the $500 billion-plus social media behemoth that also owns Instagram. Peach, Ello and Mastodon are just a few corpses on the trail of the dead that Facebook has left in its wake. Snapchat is the outlier, but even some of its most popular users, most notably Kylie Jenner, have admitted they’re using it less often these days.

“I don’t see much chance for success if we compare Vero to other social apps that have tried to rise up in the shadow of Facebook or other messaging apps, mainly due to the competitive forces in the market and how they and their users will react,” says Brian Blau, a technology analyst with research firm Gartner. With more than 800 million monthly active users, Instagram has a tremendous “network effect.” It’s tough to get people to move from a room where all their friends are hanging out to an empty one, especially when there’s no guarantee anyone will follow suit.

Still, Vero is undeniably seeing a growth spurt this week. It just passed the one million user mark, a milestone worth celebrating for any upstart social media firm. It’s also been sitting at the top of the App Store and Google Play charts, thanks largely to word of mouth among hardcore social media users.

But questions remain regarding Vero’s business plan. Most social media companies make money from advertising — you sign up for free, then advertisers pay the social media company to try to sell you sneakers and travel deals and Coca-Cola. Vero’s plan had been to invite the first million users in for free, then start charging a subscription fee for people who sign up after the million mark. That way, says Hariri, the platform can remain free of the low-quality ads cropping up on rival social media platforms. (Vero has delayed the subscription fee rollout in light of technical issues plaguing the platform amid its sudden popularity this week.)

“Today, we’re seeing incredible enthusiasm for the product that we built, for the community that we have, for the things that we stand for as a company,” he adds. “Hopefully when we turn on subscriptions and we announce our price, people are going to be satisfied on all angles.”

Subscription-based social media could have its advantages, potentially reducing the number of bots and trolls on a given app. (If bad actors have to pay money to access a platform, they may decide it’s not worth it.) But social media users have long been trained to expect free access to new platforms, making them more likely to balk at the idea of an entry fee. Subscriptions could also make Vero unaccessible for low-income users, reducing the diversity of voices on the platform.

Vero is facing controversies besides the nationalities of its developers, too. Hariri, the son of a former Lebanese prime minister who was assassinated in 2005, has been criticized for the practices of his family’s Saudi Arabian construction company, Saudi Oger, where thousands of workers reportedly went unpaid for months and were kept in living facilities with inadequate food or water. A Vero spokesperson says Hariri, who was once deputy CEO and deputy chairman, left the company in 2013, before reports of those conditions surfaced. The firm shut down in 2017.

Other creators are taking issue with Vero’s terms of service. While a Vero spokesperson points out that Vero claims “no ownership rights over your user content,” the agreement does grant Vero a license to “use, reproduce, modify … your user content.” Other social media sites have similar language in their terms of service, but the language and other issues are scaring off some would-be users nonetheless:

If that trend continues, it could kill Vero in its cradle. “It creates a lot of fear and uncertainty for a lot of users,” says Jeff Hancock, professor and founding director of the Stanford’s Social Media Lab. Still, Hancock adds that Vero doesn’t necessarily need to grow to the size of a Facebook or Instagram to become a viable, if smaller, business. “If Vero can find itself a niche, it doesn’t have to be an Instagram-killer or a Facebook-killer,” he says.

For the moment, Vero is primarily serving as a way for frustrated Instagram users to vote with their feet — or their download buttons. If and when Instagram considers Vero a potential threat, it could implement changes that render Vero superfluous overnight. That’s in part why Hariri is trying to carve out a more specific niche for his app, working with creators on projects like short films and photography books. It’s unclear if that will be enough to take on the $500 billion gorilla in the room. But Hariri retains the kind of utopian optimism common among startup-running billionaires.

“The thing that we’re counting on, frankly, is that the greatest social network is the one that exists between real people in the real world,” Hariri says. “As long as we stay true to understanding and wanting to represent real-world interaction online, then the possibilities are endless.” 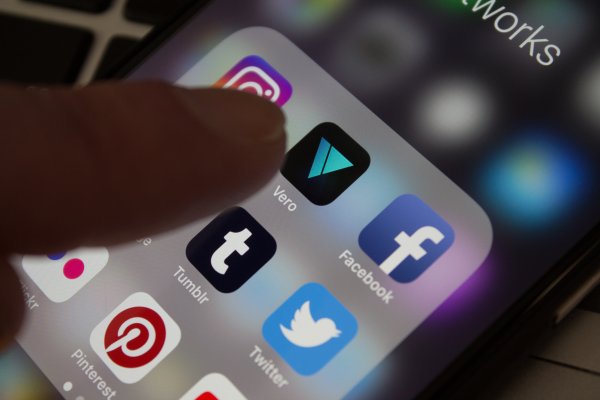 Vero Is Taking On Instagram By Fixing the One Thing Everyone Hates About Instagram
Next Up: Editor's Pick