Italy's Silvio Berlusconi Is Back in the Spotlight and So Are His Sexist Comments. Here Are Some of His Worst.

Former Italian Prime Minister Silvio Berlusconi is back in the spotlight as Italian voters head to the poll this weekend – and so is his long history of sexist and belittling behavior toward women.

The latest incident came when he told BBC journalist Sofia Bettiza last week that her handshake was so strong that “no one will marry her.”

“Men will think she is going to beat me up, no one will marry you. Are you already married? You see? Be careful,” Berlusconi told the reporter.

The comment comes as the tycoon, who was forced out of power amid a 2011 debt crisis, is poised to make a political comeback. A tax fraud conviction currently bars Berlusconi from public office until next year, but a right-wing bloc, which includes his Forza Italia party, could turn the 81-year-old into kingmaker at the March 4 elections.

His change in fortunes comes nearly half a decade after a series of sex scandals, including the notorious “bunga bunga” sex parties, and corruption cases looked to have derailed Berlusconi’s political ambitions.

The tycoon, who some have compared to U.S. President Donald Trump, has been running on an anti-immigration ticket. Critics say his gaffes, which have included racist, homophobic and sexist stereotypes, are part of a dog-whistle political strategy. Questions remain as to whether his sexist tropes will turn away women, who make up more than half of undecided swing voters, at the ballot box on Sunday.

Here are a collection of some of his most offensive remarks at women:

2003: He told American investors at the New York Stock Exchange that “beautiful secretaries” were one of the many reasons why they should invest in Italy. He later explained the comments as a misunderstood joke, Al Jazeera reports.

2005: He caused a diplomatic incident during his second-term as Prime Minister when he suggested that he had seduced Finland’s President Tarja Halonen to persuade her to let Italy host a new E.U. food safety agency. “I had to use all my playboy tactics, even if they have not been used for some time,” he said at the time.

2006: Berlusconi told a television debate that his center-right coalition had a small number of women because it was “not easy to find someone who wants to leave work and family and spend five days a week in Rome,” the New York Times reports. The statement led to rebuttals from opposition politicians and those in his own ranks.

2008: He was criticized for being tone deaf after advising a young woman, who was struggling to find a stable job, to find a rich husband.

He went on to rile Spanish commenters by mocking the cabinet of former Spanish Prime Minister Jose Luis Rodriguez, which contained nine women, as being “too pink.” It was the first time in history where more women held positions of power than men, but Berlusconi hammered the point in a radio interview. “He will have problems leading them,” Berlusconi said. “Now he’s asked for it.”

Ahead of winning his third term as Prime Minister that year, the conservative leader told local media that the left had “no taste” in women and when he looked round in parliament, he found right-wing female politicians “most beautiful.”

2009: Italy had its own Me Too reckoning that year following the culmination of sexist comments and sex scandals from the tanned premier.

In January, rising sexual-assault statistics prompted Berlusconi to say he wished there were enough soldiers to protect “beautiful” women. “We don’t have enough soldiers to stop rape, because our women are so beautiful!” He said, adding that rapes would be impossible to stop “even in a police state.”

By February, two female politicians had filed an official complaint against Berlusconi at the European Court of Human Rights, accusing him of “ongoing and repeated declarations of contempt with regards to the life and dignity of women.”

He was then embroiled in a sleaze scandal in April. Veronica Lario, his wife at the time, asked for a divorce and accused him of “frequenting underage females” after Berlusconi was photographed giving a diamond necklace to an 18-year-old aspiring model. As the months rolled on, other allegations included dalliances with an escort, and the publication of images of topless women and a naked man, who turned out to be former Czech Prime Minister Mirek Topolanek, lounging at his Sardinia home. Later, numerous women said they had attended parties at Berlusconi’s home and a businessman was put under investigation for allegedly supplying callgirls to parties thrown by Berlusconi. The tycoon denied that he had ever paid for sex.

Galvanized by the sexist scandals, female academics asked the wives of world leaders, including Michelle Obama, to boycott an upcoming G8 summit in Italy due to Berlusconi’s “offensive” attitude towards women “both in public and private.” Around 15,000 people signed their petition in protest against the public and private treatment of women in Berlusconi’s Italy.

More than 100,000 women signed a petition saying they were offended by Berlusconi after he told an opposition politician, Rosy Bindi, that she was “more beautiful than you are intelligent” during a television show. “Presidente, I am not one of the women at your disposal,” she responded.

2010: Berlusconi attempted to use a homophobic joke to laugh off a damaging sex scandal, where he is alleged to have cavorted with an underaged girl. “I’m always working flat out and sometimes I look at beautiful women … It’s better to be passionate about beautiful women than to be gay,” Berlusconi said in a speech at a motorcycle show in Milan, AFP reports.

2013: He publicly embarrassed a female employee of a green-energy with sexual jokes, asking her on stage at an event: “Do you come? How many times?”

2016: He was roundly criticized for saying that a pregnant candidate for mayor of Rome should focus on being a mother. “It is clear to everyone that a mother cannot devote herself to a job and this would be a terrible job, because Rome is in such a terrible state,” Berlusconi told state radio RAI in defence of Bertolaso.

2018: He flexed his ability to objectify women to supporters in Milan. “We need to decide whether we all go to the park and look at other people’s babysitters, or if we create something new, which would be preferable” Berlusconi said during a discussion on Italian jobs in the era of automation, Reuters reports. 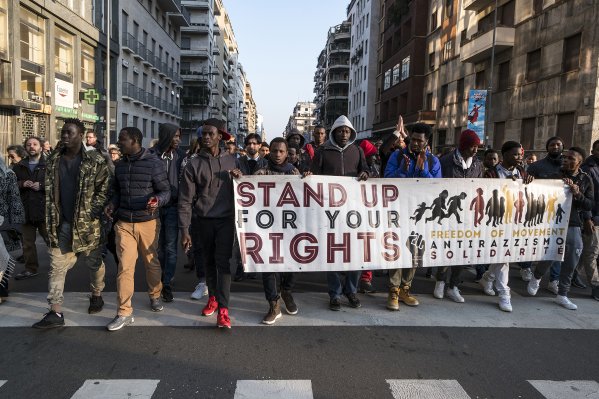 Italy’s Populists Are Stirring Up Anti-Migrant Sentiment to Win Votes. It Could Get Ugly
Next Up: Editor's Pick