Why Flu Outbreaks Have Been the Worst in Nearly a Decade

The only thing worse than getting the flu is catching it after you’ve gotten a flu shot. It’s been a terrible year for outbreaks — the worst in almost a decade. Contributing to that is the high failure rate of this year’s vaccine. The current shot is just 25 percent effective against the H3N2 virus, this season’s most-often-identified strain by the Centers for Disease Control and Prevention. The experts say, with enough time and money, they can do a lot better.

“There has to be a wholesale change to how we make the flu vaccine,” said Amesh Adalja, senior scholar at Johns Hopkins Center for Health Security. “We’re always setting ourselves up for vaccine mismatch and failures and the like because of the lead time in how long it takes the vaccines to be made.”

Drug companies and public-health agencies are already grappling with the challenge of next year and beyond. Officials must decide several months ahead of flu season the make-up of the year’s vaccine. Flu shots are typically 40 percent to 60 percent effective in any given season, though this year fell short of that mark. The ultimate goal is a universal vaccine that would operate more like a measles inoculation than a vaccine targeted at a handful of strains of flu. The idea is to offer something closer to 90 percent protection against a disease for years — if not for life — with a single vaccine.

It’s still early days. And out-maneuvering the stealthy, ever-mutating flu virus is about as tricky as it gets. There are hundreds of different viruses, and seasonal vaccines protect only against the three or four that researchers think will be the most common that season, creating an ever-moving target for public-health experts. The current epidemic has provided a new sense of urgency to push ahead. Leading the charge from Big Pharma are drugmaking giants, including GlaxoSmithKline PLC, Sanofi SA and Johnson & Johnson.

Sanofi, the world’s biggest flu-vaccine maker, signed a deal with SK Chemicals Co. in February to advance the development of a universal vaccine. John Shiver, senior vice president of global vaccines research and development at Sanofi Pasteur, says it’s hard for the scientific community to move away from the existing technologies to create a new one, in part because those have been relatively successful over the past 70 years.

Recently though, some new research leads have turned up potentially promising approaches. One that Sanofi already uses relies on cell cultures, rather than eggs, to develop vaccines because some viruses do not reproduce as well in eggs. That was a problem, for instance, with this year’s vaccine against the H3N2 strain, some experts maintain. Scientists have also developed ways to use what’s known as recombinant DNA technology in the production of cell-based vaccines. That allows them to find individual genes on a virus that are more likely to stimulate an immune response, cut them out, and insert them into the genome of another organism to make a more successful vaccine.

Even using such advanced techniques, a flu vaccine with 90 percent effectiveness may be beyond reach, given the scientific challenges of targeting the virus over time. Shiver imagines that even a universal shot, were it to be successfully developed, would have to be constantly tweaked.

“We don’t know the best way to produce them, which is why, at Sanofi Pasteur, we’ve been accumulating technology for flexibility,” he said.

GlaxoSmithKline, another leading vaccine developer, is conducting one of the first studies of a universal flu vaccine in humans. The shot is based on research directed in part by Peter Palese, the chair of microbiology at Mount Sinai’s Icahn School of Medicine in New York. Unlike current vaccines that target constantly changing proteins on the surface of the flu virus, Palese’s approach targets a part of the virus that remains relatively stable from year to year. Glaxo is lending expertise in boosting the immune response through vaccination, particularly because that region of the virus doesn’t typically elicit a big immune response.

Anthony Fauci, director of the National Institute of Allergy and Infectious Diseases, says an effective universal flu vaccine would outsell the seasonal one. The annual vaccine brought in $2.4 billion for Sanofi and GSK in 2017 alone. Vaccines can be big business for pharma companies: Pfizer Inc.’s Prevnar, which prevents certain forms of pneumonia, was its top-selling product last year, bringing in $5.6 billion. Other lucrative vaccines include Merck & Co.’s $2.3 billion-in-sales Gardasil, which protects against the human papillomavirus, and Sanofi’s vaccine against polio and whooping cough, also about a $2 billion-a-year business.

In order to have a crack at those sorts of numbers, some experts say the push for a universal flu vaccine is going to require stepped-up investment.

“If you look at the resources that are now dedicated to the universal influenza vaccine, it’s really small across the world, so there certainly needs to be mobilization,” said Wayne Koff, chief executive officer and president of the Human Vaccines Project, an organization that seeks to speed up vaccine development. Koff previously worked at the International AIDS Vaccine Initiative and sees parallels between the two viruses. When the public stepped up its efforts to fight HIV and AIDS, the research community received much-needed funding to develop the antivirals that have since transformed the way HIV is treated.

Some lawmakers are heeding the call. Senator Ed Markey, a Massachusetts Democrat, introduced the Flu Vaccine Act this month, which would provide $1 billion over five years to fund efforts by the National Institutes of Health to develop a universal flu vaccine. By comparison, Fauci’s division within NIH spent an estimated $64 million on such research in fiscal 2017.

Even the most dedicated researchers say results won’t come overnight, and people should keep taking the seasonal flu shot for now.

”This system prevents a lot of disease, and it is our best tool,” said Leonard Friedland, director of scientific affairs for vaccines in North America at GSK. “Would we like to have vaccines which would be more effective? Of course we would. But if it were easy, it would’ve been done.” 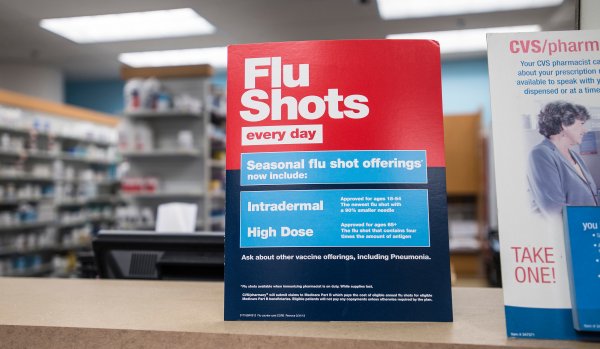 10 More Kids Have Died This Flu Season
Next Up: Editor's Pick