The Definitive History of the Royal Family and the Spice Girls

Prince Charles With The Spice Girls At The Manchester Opera House For A Royal Gala Performance To Celebrate The 21st Anniversary Of The Prince's Trust Charity.
Pool/Tim Graham Picture Library—Tim Graham/Getty Images
By Raisa Bruner

Britain has its official royalty. And then it has its pop royalty, crowned by the queens of girl power themselves: the Spice Girls. After breaking out into chart-topping success in 1996, the fivesome — Victoria “Posh” Beckham (née Adams), Geri “Ginger” Horner (née Halliwell), Emma “Baby” Bunton, Melanie “Scary” Brown and Melanie “Sporty” Chisholm — took over the world in just a few short years before ultimately disbanding in 2000. Now, however, as all eyes turn back to the U.K. in advance of the upcoming wedding of Prince Harry and Meghan Markle on May 19, the Spice Girls are back in the conversation ever since Mel B hinted they would be party guests.

It turns out those invitations are not a random royal request. There’s a significant history between the Spice Girls and the British royal family, going all the way back to their first meeting with Prince Charles more than 20 years ago, and continuing at least through that other Royal Wedding between Prince William and Kate Middleton in 2011. Here’s a timeline of some of the most-documented moments between the royals and the music icons — all potentially culminating in an especially big day in May.

Prince Charles With The Spice Girls At The Manchester Opera House For A Royal Gala Performance To Celebrate The 21st Anniversary Of The Prince's Trust Charity.
Pool/Tim Graham Picture Library—Tim Graham/Getty Images

The connection between the U.K.’s beloved girl group and the royal family seems to have begun way back in the 1990s, at the peak of their popularity. At a royal gala performance celebrating the Prince’s Trust Charity in May of 1997 — just months before Princess Diana’s death — Prince Charles was snapped enjoying their spirited company at the event. At the time, their hit single “Wannabe” had already reached #1 on the U.K. charts and on the Billboard Hot 100, solidifying them as the pop group of the moment; the Opera House gala was their first big British gig. There was even a bit of scandal about their meeting with the Prince, too, as both Mel B and Halliwell breached royal protocol by giving Prince Charles big kisses on his cheeks. Mel B asked if they could score a dinner invite — and recommended he get his tongue pierced — while Ginger even told the Prince she found him “very sexy.” Outlets reported that she also “pinched his bum,” but she has since corrected that she gave him a “pat.” (The video evidence is inconclusive.) In any case, it was a memorable first encounter.

Less than a week after Princess Diana’s passing, the Spice Girls won a “Best Dance Video” award at the MTV Video Music Awards in New York City for “Wannabe.” In their acceptance speech, they honored the princess fondly: “We’d like to dedicate this award to Princess Diana, who is a great loss for our country,” Mel C said onstage that night.

Prince Harry and Prince Charles hang with the icons in South Africa (Nov. 1997)

Spice Girls with Prince Charles and Prince Harry in the concert in Johannesburg, South Africa on November 01, 1997.
Chip HIRES—Gamma-Rapho via Getty Images

In the fall of 1997, the young Prince Harry — then 13 years old — went on a safari trip with a friend and nanny to Botswana. At the tail end, his father Prince Charles flew down to South Africa to meet up with him (and Nelson Mandela) in Johannesburg. The final component of this diplomatic summit? The Spice Girls, of course. Not only did Mandela and Charles wax poetic about the importance of the group’s message of Girl Power (“They are my heroes,” Mandela said lightly, according to the BBC, calling it “one of the greatest moments of his life”), while Charles also lavished them with praise, not to be outdone by Mandela: “It is the second greatest moment in my life,” the Prince said of hanging out with the Spice Girls. “The greatest was the first time that I met them.” Harry also got a chance to meet them himself; they apparently spent plenty of time holding his hand and paying him attention, particularly Baby. Harry and Charles also were treated to a Spice Girls charity performance for the Two Nations concert.

Princes Charles, William and Harry all show up to the Spice World premiere (Dec. 1997)

The Spice Girls arrive at the Empire, Leicester Square, for tonight's (Monday) gala premiere of the film Spice - The Movie, which was attended by the Prince of Wales and the young princes Harry and William.
Stefan Rousseau - PA Images—PA Images via Getty Images

Both Prince William and Prince Harry were in the presence of greatness during the Spice World premiere at the end of 1997, when their dad brought them along to the red carpet for the gala premiere with the five famous ladies. Apparently, the Spice Girls jokingly tried to convince Prince Charles to be their new manager — they had recently parted ways with their longtime manager Simon Fuller — but it was an offer he ultimately declined.

The Prince of Wales with former Spice Girl Geri Halliwell on his arm with a card presented to him backstage, after the Prince's Trust Comedy Gala at the Lyceum Theatre in London.
John Stillwell - PA Images—PA Images via Getty Images

When Ginger decided to quit the group in 1998, Prince Charles chose to send her a letter. He noted: “The group will not be the same without you” and asked “What will I do without your wonderfully friendly greeting?” (That alluded to her unorthodox tendency to give him a cheek kiss.) “I really wanted you to know how deeply I’ve appreciated your great generosity to my Prince’s Trust and how much I wish you well for whatever the future holds,” he further wrote, referencing her appearance at his charity galas. He signed the letter with “lots of love.” Halliwell and the Prince later crossed paths at the Prince’s Trust Comedy Gala a few months later.

A few years later, Victoria had her own encounter with Prince Charles at another of his Prince’s Trust charity events. This time it was called the “Party in the Park,” and she was accompanied by her new husband David Beckham, himself already quite famous for his soccer career. The event was a turning point for Posh: she made her solo debut at the charity concert in front of an estimated 100,000 fans, although her music career post-Spice was short-lived. (She’s now primarily focused on her fashion brand.) At the time, she told the BBC what she had chatted with the Prince about: “I was telling him how I was really nervous about performing because this was the first time I’ve appeared before 100,000 people,” she said. He, meanwhile, asked about her son.

Again, another charity concert, another Spice Girl. This time it was Emma Bunton who got to shake Prince Charles’s hand at an event in Wembley Arena before the Will Young and Gareth Gates pop concert. Bunton had been named as an ambassador for the Prince’s Trust in 2001.

During a visit to Graham Norton’s talk show on BBC2 in 2007, Mel C told a story about a past visit to Prince Charles and his sons at Highgrove, a royal residence, in which she and the rest of the Spice Girls arrived by helicopter and were served subpar cucumber sandwiches — in their opinion — for tea. (Cucumber sandwiches are a traditional snack for British tea, but clearly not the preference of the singers.) Once their distaste was known, Mel C said, they were “taken down into the kitchen, and made peanut butter on toast — by Prince William. How cool is that?”

David and Victoria Beckham arrive for the Royal Wedding of Prince William to Catherine Middleton at Westminster Abbey on April 29, 2011 in London, England.
Clive Rose/GP—Getty Images

Back in 2011, the only Royal Wedding on anyone’s mind was that of Prince William and Kate Middleton, soon to become the Duchess of Cambridge. The star-studded guest list for the big day at London’s Westminster Abbey included everyone from Prime Minister David Cameron to princesses Eugenie and Beatrice to Sir Elton John and Guy Ritchie. David and Victoria Beckham, who at the time was pregnant with her daughter Harper Seven, also got the coveted invite, showing up in appropriately dapper attire as two of the approximately 1,900 guests to attend the marriage ceremony inside the Abbey. Victoria Beckham’s dress and hat were the subjects of endless fascination.

Victoria Beckham receives her OBE from the Duke of Cambridge during an investiture ceremony at Buckingham Palace in London.
Yui Mok - PA Images—PA Images via Getty Images

Beckham became an Officer of the Most Excellent Order of the British Empire in 2017, with the honor bestowed upon her in a Buckingham Palace ceremony by none other than Prince William himself. “It was an absolute pleasure to be at Buckingham Palace today,” the celebrity formerly known as Posh shared in a statement. “I’m proud to be British, honored and humbled to receive my OBE from the Duke of Cambridge.”

Just a day after hobnobbing with Posh, Wills was at it again with the Spice Girls — this time hanging out with Emma Bunton (and his wife, Kate), during the opening of a student media center, the Global Academy, associated with Bunton’s Heart Radio work. While shaking hands, he teased Bunton about a potential Spice reunion. Her response? “Only if you come and see us!” They then chatted in a roundtable discussion about the importance of mental health, a topic near and dear to the royal family.

The Spice Girls Reunion Could Happen at the Royal Wedding

During a talk show appearance, Mel B let slip that she — and all the other Spice Girls — have received invites to Prince Harry and Meghan Markle’s May 19 nuptials. She also hinted that they might be performing at the big day, a potentially momentous occasion as the five have not appeared on a stage together since the London 2012 Olympics Opening Ceremony, although there have been rumors of various forms of reunions swirling since 2007. We’ll have to wait and see if they end up coming together once more to celebrate Harry and Meghan. 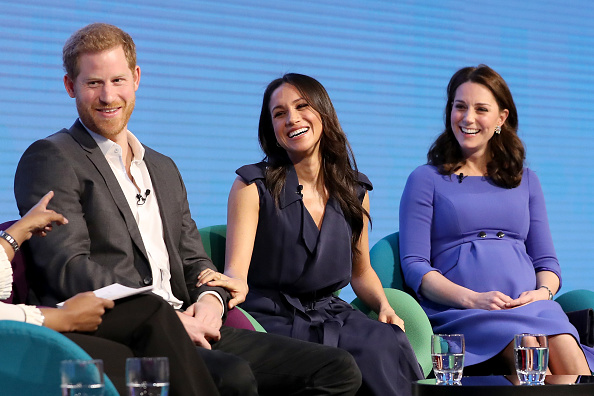