U.S. Housing and Urban Development (HUD) Secretary Ben Carson and his wife Candy Carson walk on stage prior to his address to his employees March 6, 2017 in Washington, DC.
Alex Wong—Getty Images
By Tessa Berenson

Ben Carson is the third member of Donald Trump’s Cabinet to face controversy sparked by a close relative, raising questions among ethics experts about how seriously the Administration is taking federal rules about family involvement.

The Secretary of Housing and Urban Development faced criticism this week after the Guardian reported that a career official was demoted for what she said was refusing to break the law to redecorate his office at the request of his wife, Candy.

Federal law requires congressional approval “to furnish or redecorate the office of a department head” at costs above $5,000. Helen Foster claims the acting HUD director at the time told her that “$5,000 will not even buy a decent chair” and that she had to “‘find money’ for Mrs. Carson.”

There are multiple regulations in place to prevent family members of government officials from benefiting from public office. Under the employee standards of conduct of the Office of Government Ethics, government employees are banned from “using public office for their own private gain for the private gain of friends, relatives, or persons with whom they are affiliated in a non-Government capacity.” There are travel regulations that stipulate details of payment for family, and there are anti-nepotism laws preventing government officials from hiring family members.

“There’s no place for family members to be involved in government business,” says Virginia Canter, Executive Branch Ethics Counsel at Citizens for Responsibility and Ethics in Washington. “It’s to prevent the potential for abuse of government resources.”

The question is particularly salient for Trump, who notably hired his daughter, Ivanka, and her husband, Jared Kushner, to work in the White House and saw his son, Donald Trump Jr., head to India recently on a trip that ethics groups questioned as improperly mixing work and business. Kushner recently saw his security clearance downgraded, while the Washington Post reported that officials in four countries sought to use his business arrangements to influence the White House.

“The tone is set at the top,” says Canter.

Here’s a closer look at the three controversies.

At the end of 2017, HUD spent $31,000 on a new dining room set for Carson’s office without seeking congressional approval, according to the New York Times, even as the White House moved to slash funds from the agency. The Guardian found that HUD also signed a contract last year for $165,000 on “lounge furniture” for its D.C. office.

Ben Carson “didn’t know the table had been purchased,” HUD spokesman Raffi Williams told the Times, and though he doesn’t intend to return it, “In general, the secretary does want to be as fiscally prudent as possible with the taxpayers’ money.”

Candy Carson’s role instigating the expensive redecoration isn’t the first scandal over Carson family involvement in the agency either. In January, the Post reported that Ben Carson allowed his son, Ben Carson Jr., a local businessman, to organize a listening tour in Baltimore last summer despite warnings from department lawyers that it could violate federal ethics rules.

“I expressed my concern that this gave the appearance that the Secretary may be using his position for his son’s private gain,” Linda Cruciani, HUD’s deputy general counsel for operations, wrote in a July 6 memo, the Post found.

In the course of reporting a magazine story on Carson for TIME, I shadowed him that day in Baltimore last June. Ben Jr. and his wife were there, along with Candy — as Carson studiously inquired about lead remediation on home tours, Candy chatted with the residents, cooed over their children, complimented house plants (“I like your ficus!”) and generally engaged in the political schmoozing that never seemed to come as naturally to her husband.

“Oh my goodness, does she like talking,” Carson said about his college sweetheart at one house.

In February, a group of Democratic senators asked the Office of the Inspector General to open an investigation into whether the activities of Ben Carson’s family members during his HUD tenure violated federal law or ethics rules.

Veterans Affairs Secretary David Shulkin and his staff have misled officials about the nature of trips so the agency would pay for his wife’s travel. In one example, the Washington Post reports, a senior VA official doctored language in an email about a trip to Europe last summer to make it look like Shulkin was receiving an award from a foreign government to justify having taxpayers foot a more than $4,300 bill for his wife’s airfare.

“It is outrageous that you would portray my wife and me as attempting to take advantage of the government,” Shulkin wrote in response.

Similarly, Treasury Secretary Steve Mnuchin and his wife Louise Linton have come under fire for using government jets for personal travel. In August 2017, they took a government plane to Kentucky, where they watched the solar eclipse. Mnuchin said the travel was not specifically for viewing the eclipse (“I put [the eclipse glasses] on for like two seconds. That was the end of my interest in the eclipse”) and that he was there for an event on tax reform.

Reports later surfaced that he and Linton had also requested the use of a government plane for their European honeymoon last summer. Mnuchin defended the request at a Politico event in September, saying, “I’m very sensitive to the use of government funds. I’ve never asked the government to pay for my personal travel, and this was purely about alternatives of how I’d be able to be involved for national security.”

“Public office is a privilege, and you’re servant to the public,” Canter says. “Those are public moneys, and you cannot ever be in a position where it appears that you are abusing that privilege. I feel that in every single one of these cases that has happened.” 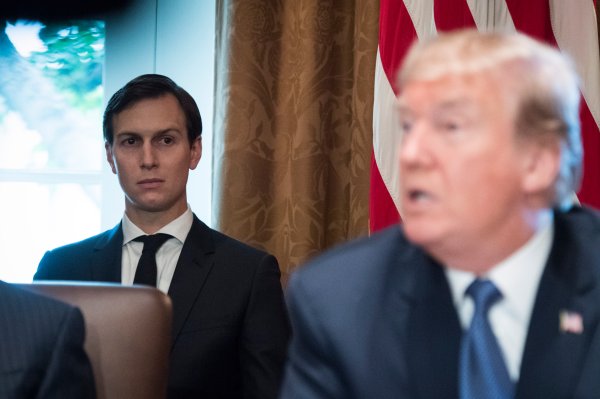