Students returned to Marjory Stoneman Douglas High School Wednesday for the first time since it weathered the country’s deadliest school shooting in five years — and the atmosphere inside the Parkland, Fla., school was a mix of nerves and tempered excitement, according to news reports.

“The saying is, ‘I am positive, I am passionate, I am proud to be an eagle,’” senior Milan Hamm told WSVN. “After this, we really realized what it was to be an eagle and how fortunate we are to have each other and how a hard time brought us all together.”

Officials have made efforts to ease the transition back to school — placing armed police officers around the building Wednesday and limiting school days to four hours for the remainder of the week, according to the Sun Sentinel. Rod Skirvin, vice president of the Police Benevolent Association in Broward, gave out carnations as thousands of students approached the school, the paper reports.

Broward Superintendent Robert Runcie tweeted a message of support and unity on Wednesday morning. “I pray that today is the beginning of our long and difficult journey from grief, sorrow and anger to a new consciousness of hope, compassion and love,” he wrote. “Thank you to our young people for leading the way. Welcome Back!”

A banner bearing messages is held as parents and students arrive at Marjory Stoneman Douglas High School in Parkland, Florida, USA, 28 February 2018, for the school's reopening, two weeks after the mass shootings at the school.
Cristobal Herrera—EPA-EFE/REX/Shutterstock

“I’m a little nervous but we have to get back so we can get some sense of normalcy,” 14-year-old Bradley Golab told the Sun Sentinel. “We’re just going to try to support each other.”

“I feel good to be back because this is my school, and I missed it,” added sophomore Zareyah Simpson. “It’s a little nerve wracking after what happened, but I feel like the school is much safer.”

Even as the community begins to heal, however, students walking the halls for the first time since the Feb. 14 attack felt their losses deeply.

“It makes you feel kind of empty inside,” Ryan Senatore, 15, told the New York Times. “Walking back in where 17 lives passed — it’s a disgusting feeling. It’s never going to be the same. Never.” 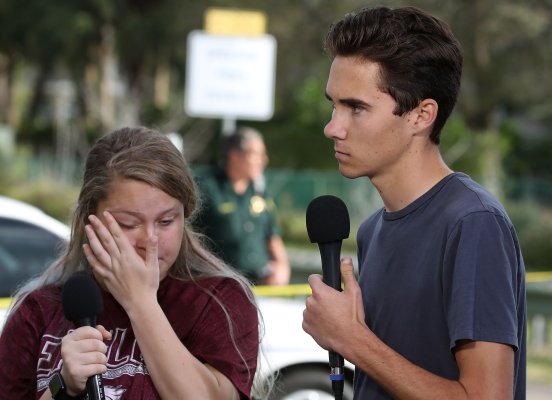