Buddhist monk Wirathu sits in his quarters at Ma Soe Yein monastery in Mandalay, Myanmar on May 25, 2015.
Thierry Falise—LightRocket/Getty Images
By Laignee Barron

Facebook has wiped an account belonging to Myanmar’s notorious firebrand monk Wirathu. The Buddhist monk, who self-styles himself the “Burmese bin Laden,” has for years used his social media perch to disseminate anti-Muslim hate speech, jingoistic sermons and virulent rumors about the stateless Rohingya minority. He’s also long been accused of stoking sectarian violence between the country’s Buddhist majority and the small Muslim minority.

Facebook, increasingly under pressure to curb hate speech and propaganda circulated on the platform, told Agence France-Press that Wirathu’s page was removed at the end of January for violating community standards.

“If a person consistently shares content promoting hate, we may take a range of actions such as temporarily suspending their ability to post and ultimately, removal of their account,” the unnamed spokesperson said.

The social media giant has come under intense criticism for failing to curb vitriolic, anti-Rohingya propaganda spread in Myanmar on its platform, especially as online hate tends to spike before outbursts of violence. Earlier this year, a pair of Australian academics accused Facebook of helping to “fuel a genocide” by poisoning public discourse against the Rohingya.

In Myanmar, Facebook is hugely popular. While internet connectivity has exploded in the former pariah state over the past four years thanks to the proliferation of smartphones and cheap sim cards, digital literacy remains low, while disinformation campaigns and incendiary speech can and have reined unchecked. Like everywhere else in the world, Myanmar’s Facebook algorithms are designed to favor and prominently place frequently liked and shared posts, which often result in the promotion of partisan posts.

Wirathu has been able to grow his support base on social media. He has amassed hundreds of thousands of followers who help circulate his incendiary sermons and videos. Today, hate speech against Rohingya, or Bengalis as they are called by nationalists trying to characterize them as interlopers from Bangladesh, is pervasive online.

As TIME wrote in its July 1, 2013 cover story titled ‘The Face of Buddhist Terror‘:

“Views about people in Rakhine state, about the origins of population and about things that may or may not have happened fly around Facebook extremely quickly and can create unstable situations,” Richard Weir, the an Asia analyst with Human Rights Watch, told the New York Times.

Last year, the government led by Nobel laureate Aung San Suu Kyi, disbanded the ultranationalist organization to which Wirathu belonged, known locally as Ma Ba Tha. The monk was also barred from sermonizing for a year. He responded by redoubling his social media efforts. When his Facebook account was temporarily blocked for 30-days last year, Wirathu claimed that “Facebook is occupied by the Muslims,” according to AFP.

While the face of the hardline nationalist movement may have lost his main pulpit for now, his videos remain in circulation and several other pages have cropped up to spread similarly inflammatory material.

“They remove his account but not his videos, and his religious hate speeches, they are still on Facebook and his followers are spreading it,” Thet Swe Win, a Yangon-based interfaith activist, told AFP. 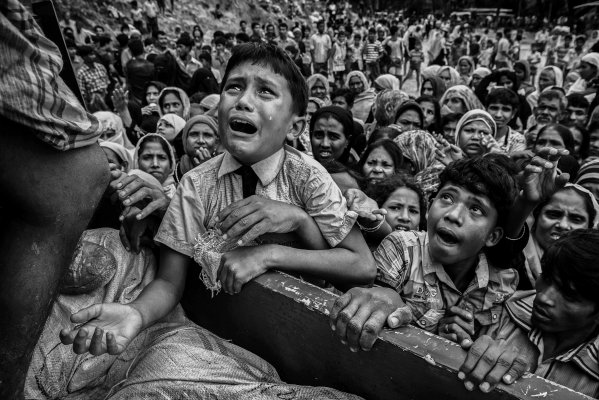 How the West Can Help Fix the Rohingya Crisis
Next Up: Editor's Pick