Experts from the United Nations have found that North Korea has been providing Syria with supplies that could be used to make chemical weapons.

The United States and other nations have long accused the Syrian government of using chemical weapons on civilians. The U.N. report comes as Syrian forces have been accused of attacks on civilians in the Damascus suburb of eastern Ghouta with what is believed to be chlorine gas.

At least 40 unreported shipments from North Korea to Syria between 2012 and 2017 included prohibited ballistic missile parts and supplies, according the report. It remains unclear whether the report will be released.

“I think the overarching message is that all member states have a duty and responsibility to abide by the sanctions that are in place.”Stéphane Dujarric, a United Nations spokesperson, told reporters on Tuesday, according to the Times.

The investigating panel comprised of eight experts in various fields including weapons of mass destruction, maritime transport and customs controls. The Security Council has commissioned the group since 2010 to investigate the circumvention of sanctions.

Read More: A Photographer Bears Witness to a Suspected Chlorine Attack in Syria

While the report does not necessarily prove ongoing collaboration between the two countries, it marks “an important breakthrough,” William Newcomb, who was a member of the U.N. panel of experts on North Korea from 2011 to 2014, told the Times. The report also highlights the shortcomings of international sanctions, and criticizes Russia and China for failing to enforce sanctions.

Though Syria signed the Chemical Weapons Convention in 2013 and vowed to destroy its stock of chemical weapons, Syria’s President Bashar al-Assad has repeatedly been accused of using banned chemical weapons throughout the Syrian civil war. 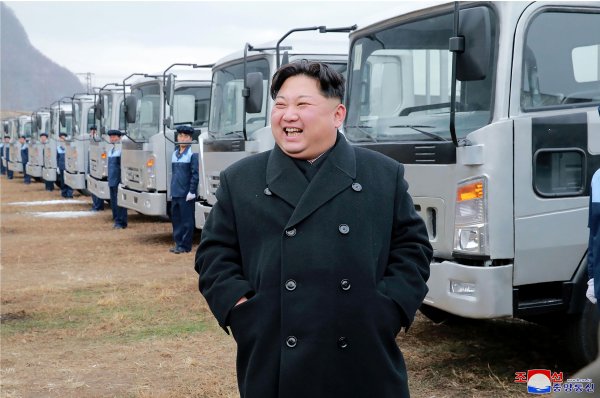 Kim Jong-Un Traveled With a Fake Passport: Report
Next Up: Editor's Pick