5 Things to Know About Levi Sanders, Bernie Sanders' Son Who Is Running for Congress

Levi Sanders, the son of independent Vermont Sen. Bernie Sanders, announced he will seek to join his father in Congress.

In a statement on his campaign website, Sanders said he will run in New Hampshire’s 1st Congressional District for a seat currently held by Rep. Carol Shea-Porter, a Democrat. Shea-Porter announced last October that she would not be running for re-election.

Here are 5 things to know about Sanders, 48, as he enters the race:

He’s living up to the Sanders brand

Sanders is running on a platform that mirrors, in part, that of his father, who defeated Clinton in the New Hampshire primary in 2016. “The basic difference is that I’m a vegetarian and he’s not,” Sanders told Vice News, which had earlier reported that Sanders was considering a run. But Sanders told Vice he’ll be running his own race.

According to his campaign website, he touts the need for a “Medicare For All” health care system, tuition-free public college and a boost to the minimum wage.Sanders also calls for urgent action to address the opioid epidemic, which he says is at a “crisis level” in the Granite State, equal pay for women and sensible gun laws.

“For 15 years, New Hampshire has been my family’s home,” Sanders statement reads. “For over 17 years, I have represented the working class who have been beaten up by the system. It is time to demand that we have a system which represents the 99% and not the 1% who have never had it so good.”

He doesn’t live in the district

It’s worth noting that although Sanders is running in the New Hampshire 1st, he resides in Claremont, which is in the state’s 2nd Congressional District. Rep. Ann Kuster, a Democrat, represents the 2nd District and she is running for re-election. (Candidates are only required to live in the state, not the district, to run for office). Sanders has three kids, all adopted from China, with his wife, Raine Riggs.

He has never held public office

But the 48-year-old has tried. According to the New York Times, Levi ran for city council in Claremont at age 40 but finished 7th out of nine candidates. He has worked with his father on his political campaigns, serving as a senior aide during his 2016 campaign for the presidency and as a consultant on his bid for the Senate, according to what appears to be his Linkedin page. Levi however, has spent the bulk of his career working as a Social Security benefits specialist.

The race will be tough

The race to fill the seat is gearing up to be competitive. With Sanders jumping into the race, there are now eight Democratic candidates in the race and three Republicans. Some of the organizations that supported the elder Sanders in the 2016 primary have already lined up behind other candidates in the race. The seat itself has bounced back and forth between Democratic and Republican control over the past few election cycles: in 2012, Shea-Porter beat out incumbent Frank Guinta, a Republican, only to lose to him in 2014. And although the Democrat narrowly beat out Guinta again in 2016, the district favored Donald Trump over Hillary Clinton at the top of the ticket. The Cook Political Report and Larry Sabato of the University of Virginia’s Center for Politics have labeled the 2018 race a toss-up.

He’s not the only Sanders running for higher office

Sanders’ step-sister Carina Driscoll recently announced that she is running for mayor in Burlington — the position that launched Sen. Bernie Sanders’ political career. Driscoll, who served as a city council member and state legislator, is reportedly also tapping into the power of the Vermont Senator in her efforts — though she, too, insists that she’s running her own race. ‘‘Being Bernie’s daughter is one small piece, but it’s an important piece because it helps people understand the vision for Burlington that I’m talking about,’’ she told the Associated Press. 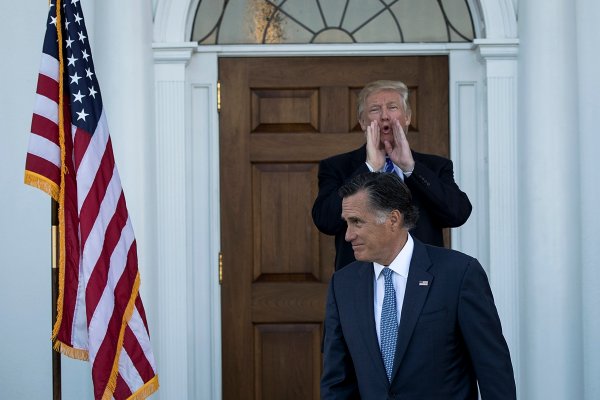 Trump Has Endorsed Mitt Romney. But Romney Once Called Trump a 'Fraud' and Trump Said Romney 'Choked'
Next Up: Editor's Pick