Why College Republicans Think the GOP Should Act on Climate Change

A group of more than 20 college Republican groups issued a call to action on climate change Wednesday with the endorsement of a proposal for a federally imposed carbon tax.

The announcement from the newly-announced Students for Carbon Dividends group is the latest signal of a fissure between an older generation of elected Republicans who view climate change policies with skepticism and young conservatives who accept global warming science and want to see a conservative solution to the problem.

“People are really looking past the politics,” says Alexander Posner, president of the coalition and a Yale College student. “They’re interested in having a conversation about solutions.”

Student leaders behind the alliance, which includes college Republican groups from a diverse array of schools stretching from the heartland to New England, will promote a proposal for the federal government to tax carbon dioxide emissions from industry and return the revenue to taxpayers as a dividend. The plan also calls for a repeal of Obama-era climate change regulations.

The specific tax and dividend structure endorsed by the young Republicans was first proposed last year by a group of Republican party elder statesmen including former secretaries of State George Shultz and James Baker as well conservative economists including N. Gregory Mankiw and Martin Feldstein, both Harvard University professors. The group, called the Climate Leadership Council, suggests taxing carbon dioxide emissions at $40 a ton and says the average American family of four would get $2,000 in annual dividends under the plan.

The new coalition hopes that the proposal — both serious and rooted in free market principles — will help win over disenchanted young Republicans. Polling from the Pew Research Center showed nearly a quarter of people under 30 who identified as Republican in 2015 switching to the Democratic Party by 2017. Young people, including young conservatives, overwhelmingly support measures to combat climate change. A survey commissioned during the Obama Administration by Young Conservatives for Energy Reform found that 74% of young conservative voters support measures that address global warming, provided they don’t harm the economy. And a poll released this week found just over half of young Republicans are concerned about climate change.

“College Republicans say they’re struggling to recruit on campus, often because of the climate issue,” says Posner. “Strategically there’s a real interest and value in conservatives taking an active stance on this issue.”

But while the new coalition includes six college Democratic clubs, its founders are clear that their group supports different solutions from many of the climate change activists on college campuses today — think largely of the push for universities to divest from fossil fuels.

Instead, they are offering solutions they say even the most ardent free-market conservatives should be able to support. Economists have hailed a carbon tax as the most efficient mechanism to address climate change. And conservative thinkers endorse the idea of using the revenue gained by taxing polluters to fund a tax cut for a large cross section of the economy.

“We are the party of solutions,” says Dylan Jones, chairman of the University of Kansas College Republicans. “We need to be champions of the pro-life movement in every single way. If climate change is posing a threat to humanity it’s something that needs to be addressed.”

Shultz, Baker and others first proposed the tax plan last year in the early days of the Trump Administration, hopeful that the president might soften his tone on the issue when presented a viable conservative plan to address it. But chances of implementing a carbon tax — dim to begin with — have faded as president Trump has continued to deride climate change, undoing regulations that target it and preparing to remove the U.S. from the Paris climate deal, a global pact aimed at addressing the issue.

Shultz, who served as Ronald Reagan’s Secretary of State and Richard Nixon’s Treasury Secretary, tells TIME that the swelling support from young conservatives will act as a “shot in the arm” for conservative efforts to address climate change.

“All the major actions in the conservation area have taken under the leadership of Republican presidents,” says Shultz, referring to the creation of the national park system and the founding of the Environmental Protection Agency, among other things. “There are a few people who have fallen off the bandwagon, but we’ll get back to our tradition. And the college Republicans show how that’s going to happen.”

Correction: The original version of this story incorrectly identified Alexander Posner. He is president of the Students for Carbon Dividends, he is not president of the Yale College Republicans. 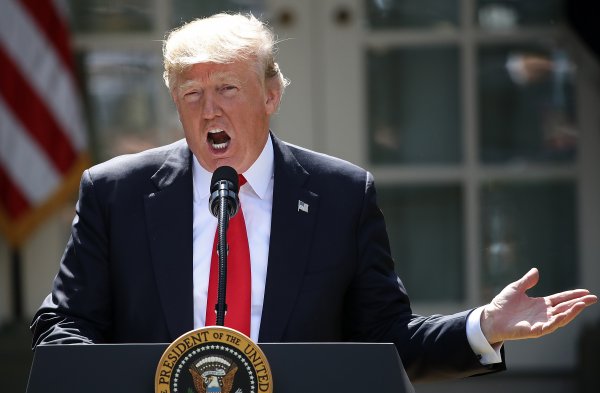 Trump Tells Leaders He May Rejoin Paris Agreement
Next Up: Editor's Pick