Here's Why West Virginia Teachers Are On Strike

Teachers in West Virginia continued their strike for a third day on Monday, shuttering schools and affecting nearly 277,000 kids.

The teachers began their strike Thursday, Feb. 22, in protest of pay raises the state’s governor signed into law that teachers say do not go far enough. The raises included a 2% pay increase starting over the summer, followed by 1% increases in 2020 and 2021.

Republican Gov. Jim Justice called the pay raise, which also affects state employees, “responsible” in a statement last week. “We need to keep our kids and teachers in the classroom,” the governor said. “We certainly recognize our teachers are underpaid and this is a step in the right direction to addressing their pay issue.”

Teachers in West Virginia, however, are among the lowest paid in the nation. The state ranked 48th in terms of teacher pay in 2016, according to the National Education Association. On average, teachers made $45,622 in 2016 — well below the national average of $58,353. Teachers also say the state’s raise will help cover the rising cost of health insurance. So on Thursday, Friday, and Monday school was canceled across the states’ 55 counties as thousands of teachers lobbied lawmakers at the state capitol.

Teachers in West Virginia have galvanized around the issue, staging the first ever state-wide walk-out, according to CBS News. In interviews with various outlets, teachers have said they have to rely on federal assistance just to make ends meet. “We collected on the [Women, Infants, and Children food and nutrition service], so that’s how low teacher pay is,” an art teacher named Jacob Fertig told CNN. “There were a lot of times where we got to choose between groceries and health coverage for my family. This isn’t just an issue of a bunch of people squabbling over a little bit of insurance benefits or a little bit of pay — we are really in a bad place here as far as that stuff goes.”

Dale Lee, the president of the West Virginia Education Association, and Christine Campbell, the president of the American Federation of Teachers-West Virginia told MetroNews in West Virginia that they’d been in conversation with leaders in the state over the past few days and some progress has been made. “We still have some real sticky issues to finalize, but we are making progress,” said Lee. He said they would decide how to move forward and if teachers will return to classes following additional conversations that he is expecting will happen later on Monday.

The state’s attorney general has also said the strike is “unlawful” and said he is prepared to take action if necessary. “This illegal work stoppage affects hundreds of thousands of students and families across our state. Our office is prepared to support any relevant state agency or board with legal remedies they may choose to pursue to uphold the law,” Attorney General Patrick Morrisey said in a statement.

Before the walkout, teachers and members of communities across West Virginia took steps to ensure students that rely on schools for meals would not go hungry as a result of the strike. According to WJLA in Washington, handed out food to students ahead of the strike. MetroNews reports that volunteers at the Huntington, W.V. Facing Hunger Foodbank filled some 700 backpacks of food were packed last week for students. According to AFT-WV, makeshift childcare centers were also being set up at area churches and community centers. 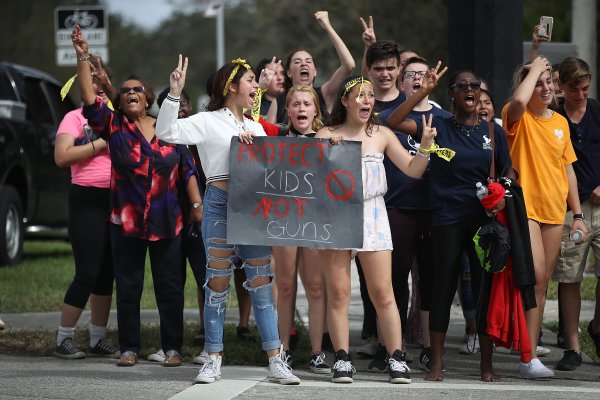 Colleges Assure Prospective Students That Protesting for Gun Control Will Not Affect Their Admission
Next Up: Editor's Pick