Dr. Jordan Peterson in Toronto, Ontario, Canada on Dec. 6, 2016.
Carlos Osorio—Toronto Star/Getty Images
Ideas
By Belinda Luscombe
Luscombe is an editor-at-large at TIME and the author of Marriageology: The Art and Science of Staying Together.

Two years ago, almost nobody had heard of University of Toronto psychology professor Jordan Peterson. Now his new book 12 Rules For Life: An Antidote to Chaos is one of the bestselling books on Amazon, his YouTube lectures have garnered millions of views, and he has become one of the most loathed and loved academics on the Internet. He spoke with TIME about his rise, his supporters and the news. All links to evidence in Peterson’s responses were provided by him.

Are you surprised at the success of your new book 12 Rules for Life, which has been No.1 on Amazon for several weeks? Surprised barely covers it. I can’t reconcile myself to what’s been happening since September 2016.

How did it all start? I put three videos [on YouTube]. One objecting to new legislation in Canada that required a form of compelled speech under the guise of compassion for the downtrodden that I thought was a terrible, terrible mistake. Another objecting to the University of Toronto’s requirement that its Human Resources staff undergo unconscious bias training, which I regard as scientifically suspect. And another detailing out the structure of what I regarded as the politically correct game. Those caused a tremendous amount of trouble.

Is it fair to say that you attract a lot of young male followers who are quite angry? I don’t believe that’s true.

You never worry about things that are said by your fans? Oh, sure. I worry about them. But I have irrefutable evidence that I’ve pulled thousands of young men away from the attractions of the “alt-right.” Part of the core information that I’ve been purveying is that identity politics is a sick game. You don’t play racial, ethnic and gender identity games. The left plays them on behalf of the oppressed, let’s say, and the right tends to play them on behalf of nationalism and ethnic pride. I think they’re equally dangerous. The correct game, as far as I’m concerned, is one where you focus on your individual life and try to take responsibility for your actions.

Would gun legislation help stop school shootings? I think that in the United States the probability that gun legislation would stop the school shootings is basically zero. School-shooting culture doesn’t seem to have manifested itself in other places as much as it has in the U.S. And I can’t tell exactly why that is. It’s conceivable that it has something to do with the more rough and ready attitude towards guns.

Do you think it’s the responsibility of people at the top of the power totem pole to share benefits with those at the bottom? There’s no doubt that inequality destabilizes societies. I think the social science evidence on that front is crystal clear. The correlation between inequality and male homicide rates is absolutely staggering. The answer to the problem of inequality is for the people who are fortunate enough to either have been gifted or deserved more to do everything they can to make the communities around them as strong as they possibly can.

Is it the same with power? If you are in the group that has the easiest access to opportunity or power, does it not behoove you to lift up those who are more oppressed? I don’t think we should shoot for equality of outcome at all. I think that would be an absolute catastrophe. There’s no evidence whatsoever that any attempt to ever do that has worked. You think we should all listen to the same music and eat the same food and go to the same plays and what, share the same partners?

When you seek to represent the oppressed, don’t you end up representing a lot of people who are in some kind of gender or ethnic minority? In the 1970s when the French intellectuals in particular were forced to abandon their Marxism because of its obvious catastrophic murderousness, they played sleight of hand and transformed Marxism into identity politics. I don’t think it has anything to do with genuine concern for the well being of the oppressed.

How do you feel about the LGBTQI movement? Like many civil rights movements, it’s had its beneficial effects. I think that for a variety of reasons, it would probably be better to talk about intersectionality as an idea. Because the LGBT etc. movement is increasingly an exercise in intersectionality. But the problem with that, and this is actually one of the perversely comical things about intersectionality as an intellectual movement, is the intersectionalists have discovered the flaw of identity politics. And the flaw in identity politics is that there’s an innumerable number of valid minority statuses. Which is also part of the reason why the West turned to the individual as the paramount category. The LGBT movement is very well organized and had a tremendous amount of political and sociological success in the last three decades. But now it’s an activist bureaucracy with nowhere left to go. It’s not going to just voluntarily dismantle itself. So now humanities departments at universities have become part of that activist bureaucracy. They have become completely dominated by radical leftists. That’s just a reflection of the empirical facts. It’s not something I’m inventing.

Why do you say in the book that “most men do not meet female human standards”? The evidence for that is pretty clear. Women have every reason to be as picky as they possibly can be, because they bear the brunt of the catastrophe of childrearing.

Do you worry that to phrase it as you do, and also to say that “women will not date guys who are their friends,” seems to promote an antipathy between the genders? There is an antipathy between the genders. Their interests are not identical. Look what’s happening in our culture. The whole last three months have been consumed by the #MeToo scandal. Our interests aren’t identical at the biological level. Or even at the practical level.

So what do you think of the #MeToo Movement? I think that the treatment of women at the hands of some men is reprehensible. That’s what a small percentage of very dangerous men are like. That should be stopped. But then you have a believe-the-victim strategy, which is associated with dangers like violation of the presumption of innocence. It’s more deeply reflective of a bigger problem in society, which is that the birth-control pill has enabled women to compete with men on a fairly equal footing. But we still don’t know what the rules are that should govern the behavior, the interaction between men and women in places like the workplace.

Does the huge number of women who report some kind of sexual assault or harassment suggest that it’s more than just a couple of bad actors? That it is a systemic problem? Well it depends on how you define sexual assault or sexual harassment. The question is: Where do you place the boundaries for defining that phenomena? And if it’s — let’s call it unwanted penetrative sex, then no, I think it’s a very small minority of men who are doing most of the damage.

What if it’s unwanted sexual attention by a senior employee that then leads to your marginalization at work? Well, again, I think that the men who engage in that sort of thing on a regular basis are a very small minority. The depth of the measurement problem is a big problem. It’s like defining hate speech. Is there hateful speech? Well, obviously. Who’s going to define the parameters of hate? Oh, well, we can solve that later. Well no, we can’t. That’s the problem.

You say women won’t marry men who earn less than they do. But already 29% of women earn more than their husbands. Is this a cultural thing that might change? Well, in my more cynical moments I think it’ll change entirely. There’s lots of cultures in the world where women do all the work. It’s not necessarily that easy to entice men into responsible work. We tend to think of that as a norm in the West. It’s a norm that’s been established through a hell of a lot of effort.

Except that we have many more women than men graduating from every level of university and yet they rarely get to the C-suite, or the boards. What is going on there? I know exactly what’s going on there. If you want to occupy the C-suite, or the top one-tenth of 1% in any organization, you have to be obsessively devoted to your career at the expense of everything else. And women look at that and they think, No. So you actually have to reverse the question. The question isn’t, Why aren’t more women in the C-suite? The question is, Why are there any men? Because it’s the men who are willing to be obsessive about their careers and work 80 hours a week like nonstop and hyper-efficiently. The hyper-productivity of a minority characterizes every domain where there’s creative production. And almost all of the hyper-productive people are men. 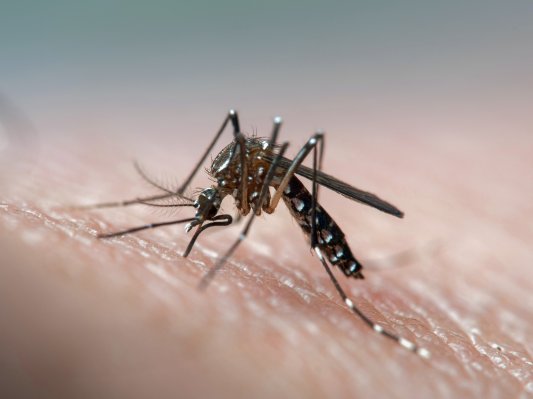 We Could Hack Mosquitoes to Prevent Dengue and Zika
Next Up: Editor's Pick