Boko Haram Has Kidnapped Dozens of Schoolgirls, Again. Here's What to Know

After declaring in 2015 that the extremist group Boko Haram had been defeated, the Nigerian government said on Sunday that 110 girls are missing after Boko Haram militants stormed a school in the northeastern town of Dapchi on Feb 19.

The apparent abduction has revived painful memories of an infamous 2014 kidnapping of 276 girls from a school in Chibok and the past administration’s botched attempt to address Boko Haram’s kidnappings. Here’s more:

Boko Haram fighters opened fire as they drove into Dapchi, which is in Nigeria’s Yobe state, on machine-gun mounted trucks. They then headed for the Government Girls Science and Technical School, sending students and teachers fleeing into the surrounding bush. The attackers were camouflaged, witnesses told Associated Press, causing a number of students to think they were soldiers.

Parents fear the girls will be made brides for Boko Haram fighters like many of the kidnapped Chibok girls, who were forced to marry their captors.

The town of 15,000, which is a three hour drive from the city of Maiduguri, where the insurgency was born, has long feared an attack by Boko Haram. Nigeria redeployed its troops from Dapchi to an area further north in Jan. and, tragically, the group struck the town weeks later.

How did the authorities respond?

Not well, in the immediate aftermath at least. After the attack, the state government of Yobe told reporters that around 50 girls were missing, but parents counted more than 100 absent. A school official then suggested to local media that many of the students had simply returned home to their families on foot and that the militants were only looking for food.

Confusion mounted when the Yobe state government said on Wednesday that the army had rescued dozens of girls, which led to celebration on the streets of Dapchi.

The government was then forced to issue a retraction the following day, saying that the girls had not been found or rescued. “The Yobe state government has no credible information yet as to whether any of the schoolgirls was taken hostage by the terrorists,” Abdullahi Bego, spokesman to Yobe state governor Ibrahim Gaidam, said in a statement on Thursday. According to the Wall Street Journal, the governor had to be escorted out of town that day as locals pelted his motorcade with rocks.

Nigerian President Muhammadu Buhari only acknowledged the situation on Twitter on Wednesday saying he has “directed the Military and Police to mobilize immediately to ensure that all the missing girls of Government Girls Secondary School, Dapchi, are found.”

On Sunday, the Nigerian Air Force issued a statement saying that the chief of air staff had “directed the immediate deployment of additional air assets and Nigerian Air Force personnel to the northeast with the sole mission of conducting day and night searches for the missing girls.”

How does this compare to the Chibok kidnappings?

There are some painful similarities. Just like four years ago, the current administration has been slow to acknowledge the missing girls.

The Buhari administration has at least reacted more speedily than former President Goodluck Jonathan, who took two weeks to address the kidnappings and did not call the governor of Borno State for 19 days. The president described the Dapchi girls’ disappearance as a “national disaster” days after the attack, but has been criticized for failing to publicly address the situation apart from the occasional Twitter update.

Jonathan’s weak response is what led to the creation of the international #BringBackOurGirls campaign, which the then President criticized as a “manipulation” of the victims of the attack.

According to the New York Times, the missing girls’ parents are forming a similar organization to Bring Back Our Girls, to advocate the release of their daughters. Today, around 100 of the 276 Chibok girls remain as hostages and Dapchi’s parents worry that the same fate will befall their children. 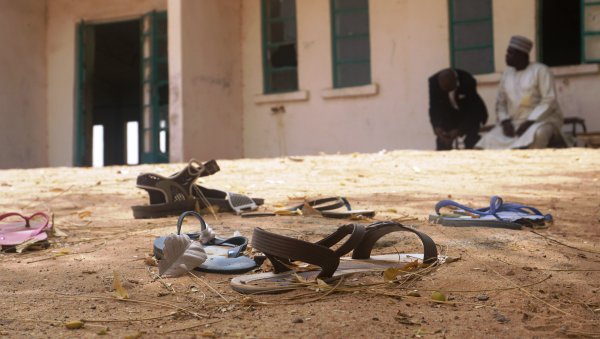 Nigeria Confirms 110 School Girls Are Missing
Next Up: Editor's Pick