The White House is considering the idea of using restraining orders to take firearms away from people considered dangerous as part of its response to last week’s massacre at a Florida high school, two people familiar with the matter said.

Under extreme risk protection orders, which are also known as red flag laws or gun violence restraining orders, firearms can be confiscated from people found to be at risk.

The White House is studying an Indiana version of the law, and is considering other measures as well, according to the people, who requested anonymity to discuss policy deliberations. Four other states also have such laws.

At the White House on Thursday, Florida Attorney General Pam Bondi described to President Donald Trump similar efforts underway in her state to allow law enforcement to seize firearms from someone who is deemed to be a danger to themselves or others.

At a Florida town hall on CNN earlier in the week, Marco Rubio, one of Florida’s two senators, said he supported restraining orders.

While the concept has bipartisan support, some gun-rights groups have embraced it because it does not impose new regulations on firearms themselves. It is one of a range of proposals, including mental health initiatives, that are under consideration by the White House.

California, Connecticut, Indiana, Oregon and Washington have laws that allow the authorities to temporarily strip people believed to be a danger to themselves or others with their weapons. Anyone subject to such an order would not be allowed to buy or obtain more guns while the order was in effect.

The Trump administration is looking at encouraging states to enact the legislation, possibly by tying grant money as a reward for those states to adopt the idea, one of the people said.

Deputy Press Secretary Raj Shah said at a press briefing on Thursday that the White House was looking at red-flag laws. “I think some states have had these red-flag laws, for example, that remove firearms after you go to a judge for potentially dangerous individuals. That’s something that’s being done right now in a variety of states, right? They have due process rights for these individuals. It seems to be working in certain areas. That’s something that we’re looking at and other places we’re looking at,” Shah added.

The proposal came as the White House has been casting about for a response to widespread demands for action, including new gun laws, in the wake of the shooting last week in Parkland, Florida, that left 17 people dead.

Earlier on Friday, the president was applauded at the Conservative Political Action Conference when he reiterated support for training members of school staffs to carry concealed weapons. He said armed faculty members could have stopped the Feb. 14 massacre at Marjory Stoneman Douglas High School.

“A teacher would have shot the hell out of him before he knew what happened,” Trump said.

Trump said he spoke Friday morning to Republican House Speaker Paul Ryan and Senate Republican Leader Mitch McConnell about a response to the school shooting. “People are looking to really energize,” he said.

Trump repeated on Friday that he would support stricter firearms regulations, including a proposal to strengthen the federal background check system and raising the minimum age for buying a semi-automatic weapon to 21, something the powerful National Rifle Association has said it opposes. 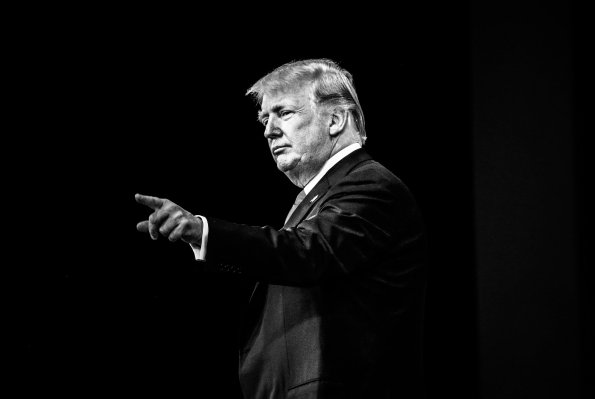 President Trump Made a Promise to End School Shootings. But It’s Unclear How He Intends to Keep It
Next Up: Editor's Pick