By Tara John and Alix Langone

Ivanka Trump applauded for North and South Korean athletes while leading the U.S. delegation at Sunday’s closing ceremony for the Winter Olympics.

Trump stood and clapped when both North and South Korean athletes entered the stadium during the closing ceremony, according to CNN, unlike Vice President Mike Pence who remained seated when the two countries arrived during the opening ceremony.

Trump was seen alongside South Korean President Moon Jae-in and his wife during the closing ceremony, but did not interact with hardline North Korean general Kim Yong Chol.

Kim on Sunday said North Korea was open to talks with the United States, the Associated Press reported. The White House did not immediately comment.

Sending Kim to lead North Korea’s Olympic delegation was a provocative move for North Korea during the 2018 Olympics, which South Korean President Moon Jae-in has called the “peace games.” Kim, who is the hermit state’s former intelligence chief, has been accused of masterminding two attacks on South Korea in 2010 — the torpedoing of the South Korean navy ship the Cheonan, which killed 46 sailors, and the shelling of Yeonpyeong Island, which killed two. American intelligence also believes he signed off on the 2015 hack of Sony Pictures.

North Korean envoys to the Games’ opening ceremony included Kim Yo Jong, the sister of leader Kim Jong Un. Kim Yo Jong went on to invite the South Korean president to the North Korean capital for talks between both countries.

Gen. Kim’s visit was agreed to in a bid to improve inter-Korean relations and pursue denuclearization, Seoul’s Ministry of Unification said on Thursday.

Trump landed in South Korea on Friday and took part in an evening banquet with Moon at a traditional Korean house, used only for heads-of-state visits. The banquet was a kosher menu that was made to fit Trump’s strict kosher diet. She spent the remainder of the weekend watching the Olympics.

White House officials had said on Thursday that Trump had no plans to interact with North Korean officials, engage in private negotiations or meet with any North Korean defectors.

On Friday, the Trump administration declared new sanctions against North Korea, the largest ever, in an attempt to put pressure on the rogue nation to scale back its nuclear weapons program. Trump emphasized U.S. “commitment to our maximum pressure campaign to ensure that the Korean Peninsula is denuclearized” at her dinner with President Moon Jae-in. 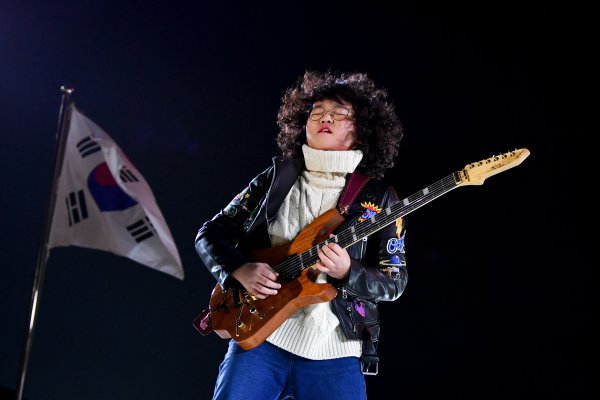 The Star of the Olympics Closing Ceremony Is This Guitar Kid Who Really Rocked Out
Next Up: Editor's Pick