The skaters — Nathan Chen, Adam Rippon — are done. The marquee skiers — Lindsey Vonn, Mikaela Shiffrin — have also finished their work in South Korea and collected their medals. Snowboarding halfpipe gold medalist Chloe Kim has long left South Korea for her victory tour and cover shoots in the United States. The women’s hockey team earned redemption against Canada in a thriller.

So for America’s big Olympic stars, the Games are pretty much over. Going into the final weekend of the PyeongChang Olympics, U.S. audiences may be looking for something to get fired up about.

Thankfully, the curlers swept their way into our hearts.

What better way to end an Olympics than with a Miracle On Sheet? (Okay, it’s still ice; “sheet” is the curling term for the surface. And an American win over the Swedes wouldn’t be quite as monumental as a bunch of amateur American hockey players taking down the Soviet Red Army in 1980 at the height of the Cold War. But hey, with just a few hours left before Sunday’s Closing Ceremonies, we find ourselves at the stretching phase of the Games).

Here’s a tip sheet to help prep you for America’s last Olympic stand in PyeongChang.

When is the curling gold medal match?

The curling gold medal match between U.S.-Sweden starts at 3:25 p.m. on Saturday, Feb. 24 at the Gangneung Curling Centre. So that’s 1:25 a.m. eastern on Saturday morning. Not ideal, but when else in your lifetime will the American men’s curling team appear in the Olympic gold medal game? Try never, most likely. You can sleep in Saturday anyhow.

Where can I watch the curling gold medal match on television?

NBCSN will air it live.

What is going on in curling?

TIME’s been here for all your curling needs; this piece will give you the basics. Here’s the big takeaway: while curling might look unusual and complicated, the scoring system is fairly straightforward. In each “end,” kind of like a baseball inning, two teams each throw eight stones. After all stones are thrown in an end, the team with the most stones closes to the “button” — the bullseye you see on the TV — scores points. But only the stones in the “house” — the dartboard looking thing with the rings — can score. So if, say, the U.S. had two stones near the button, and the Swedes had a third stone on the outer boundaries of the house, the U.S. scores two. The team that doesn’t score in the end — in these example, the Swedes — gets the last shot, or the “hammer,” in the next end. The hammer’s a key to curling. The last shot gives a team an advantage: a curler can sneak a shot near the button or knock out an opponents scoring stones.

Can you give me a few more curling terms that make me sound like I know what I’m talking about?

Sure. In curling, the “skip” is the team captain who tells the other curler where to aim, and takes his team’s last shot in an end. A “bonspiel” is a curling tournament (The Olympics is grandaddy of all bonspiels). Curlers push off the “hack,” a piece of rubber that’s like a starting block, to throw a shot. You must release the stone before the “hog line” to avoid a violation.

“Beer” is what many fans in the Gangneung Curling Centre happily consumed during America’s semifinal upset over Canada.

Do curlers use performance-enhancing drugs?

How good is Sweden at curling?

Well, while the U.S. eked out a win over Canada in one semi, Sweden was crushing Switzerland in the other, 9-3. The Swiss even conceded the last two ends, which seems ridiculous: it’s the Olympics, throw all your rocks, man. Sweden’s 8-2 for the tournament.

Back in 2012-2013, Swiss skip Niklas Edin became the first skip to lead a team to a world championship and European championship in the same season. According to Edin, the Swedes prepped for the PyeongChang Olympics … by playing pool. “It is almost as tactical as curling,” says Edin. “It’s very interesting to see all the angles and set-ups, how to win. I’ve started liking that and I think it reminds us a lot of curling so it’s become a kind of alternative training. I checked my diary for one week when I hadn’t been able to lift weights and I’d been playing 43 hours of pool. We get the competition feel and can train the same way we do at curling but it’s in a warm pool hall.”

The U.S. skip, John Shuster, is making his fourth Olympic appearance, and third as skip. After winning bronze in Torino in 2006 in a support role, he’s struggled as Olympic skip before these Games, finishing last in Vancouver and next-to-last in Sochi. The Minnesotan works at Dick’s Sporting Goods on the side to support his curling career.

Will Landsteiner return to his engineering firm as an Olympic medalist? Stay up late on Friday to find out. It’s the best American story going. 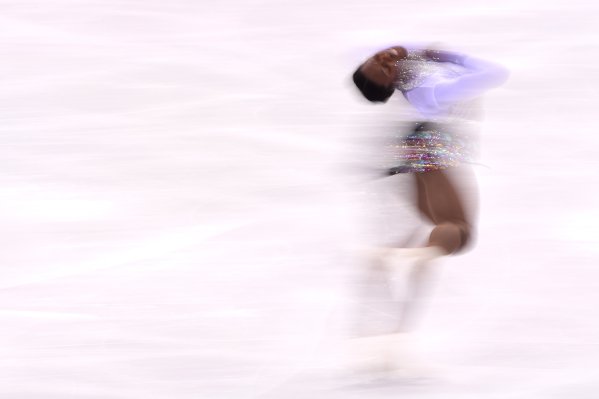 This French Figure Skater Made a Surprising Costume Change Midway Through Her Olympic Performance
Next Up: Editor's Pick