With its newly announced Galaxy S9, Samsung is making a simple statement: The future of the smartphone lies in the camera.

Samsung on Sunday unveiled the Galaxy S9 and Galaxy S9+, a new pair of flagship smartphones launching on March 16. As in the past, the biggest differences between the standard and plus Galaxy S9 models come down to screen size: the Galaxy S9 will have a nearly borderless 5.8-inch display, while the Galaxy S9+’s display will measure 6.2 inches. Both phones will be available for preorder starting on March 2; with the S9 priced at $719.99 and the S9+ costing $839.99.

Samsung is pushing the Galaxy S9’s revamped camera as its defining characteristic. The S9 has a slew of new camera features meant to help users take better photographs, more easily create GIFs and emojis, and discover more information about their real-world surroundings. At the heart of all this is an updated camera that includes a “super speed dual pixel” sensor and a mechanical dual aperture. The former is an improved version of the “dual pixel” technology Samsung introduced with the Galaxy S7 for faster and more accurate autofocusing. The speedier version in the Galaxy S9 will allow the camera to fixate on subjects even more quickly, Samsung says. The phone’s mechanical dual aperture shoots at f/1.5 and f/2.4, adjusting itself to let in more light when necessary. The company claims the new camera system should result in 30 percent noise reduction compared to the Galaxy S8.

Read more: ‘We’re Going to Get Better at This.’ Samsung Is Still Betting Big on the Smart Home

Samsung’s new Galaxy phones will also have a slow motion feature called Super Slow-mo that can shoot at 960 frames per second, compared to the iPhone’s 240 frames/second maximum. The Galaxy S9 can then take that slow motion footage and condenses them into easily shareable GIFs in different styles. There’s also an automatic mode that captures a slow motion video whenever movement is detected within the frame.

Yet one Galaxy S9 camera feature in particular appears to be undeniably influenced by the iPhone: AR Emoji, which scans your face to create a three-dimensional avatar resembling you that matches your facial expressions as you talk (Apple offers a similar feature on the iPhone X called Animoji). Samsung’s feature worked decently in my experience, but the resulting emoji didn’t look a whole lot like me. It also thought a chunk of my hair was part of my face during the initial scan, which left a smudge on my AR emoji’s forehead. A Samsung representative said the phone I was using wasn’t running a final version of the software.

Samsung’s Bixby virtual assistant, touted as one of the Galaxy S8’s headlining features last year, is getting some big improvements in the Galaxy S9. Bixby Vision, a feature that lets you wave the phone’s camera in front of real-world objects to learn more about them, will be able to provide new types of insight on the Galaxy S9. For example, the camera can be used to translate foreign language text in real time, similar to Google Translate. But Bixby can actually overlay the translated text on top of the image being viewed to make the new text seamlessly blend in with whatever you’re looking at. During my brief demo of the Galaxy S9, this worked instantly when translating a sign from English to Armenian.

Bixby Vision is getting a few other new tricks too. You can use it to apply virtual makeup to a selfie with the front-facing camera, then decide to purchase the corresponding cosmetics. It can display nutritional data for food, too — pointing the camera at a block of cheese revealed the caloric content of a slice of gouda, while it quickly identified grape tomatoes on a plate of veggies. But it struggled with foods that closely resemble other edibles — it mistook slices of yellow squash for french fries and sliced mangoes.

The Galaxy S9’s camera may be the star of the show, but it’s also worth noting that Samsung is holding onto legacy features at a time when rivals like Apple are eliminating them. Unlike many of today’s newest smartphones, such as the iPhone X and Google Pixel 2, both new Galaxy smartphones still have a 3.5mm headphone jack. For those who want a new phone but detest the idea of having to keep track of a tiny dongle or buy wireless headphones, this could make the Galaxy S9 a compelling option.

Read more: Apple’s HomePod Faces a Challenge the Company is Totally Unfamiliar With

Although the Galaxy S9 includes both facial and iris recognition (which Samsung has combined into one authentication feature called Intelligent Scan, although users can choose to use both separately), the company has also decided to keep the fingerprint sensor on the back of the phone. Apple, comparatively, nixed the fingerprint reader from the iPhone X and replaced it with Face ID. But Samsung did make one small but important alteration, placing the fingerprint sensor underneath the rear camera instead of alongside it. This makes it much easier to reach the biometric scanner without accidentally swiping the camera, which was one my my biggest complaints when reviewing the Galaxy S8. Otherwise, the Galaxy S9 design largely remains unchanged compared to the Galaxy S8, which isn’t a bad thing considering the Galaxy S8’s aesthetic still feels relevant and fresh. It’s starting to feel like Samsung is adopting the “tick-tock” cycle Apple was once known for, in which the company would introduce major redesigns one year and then more refined incremental changes the next. For Samsung, that pattern is more or less true dating back to the Galaxy S6, which introduced a design that remained generally consistent until the Galaxy S8’s debut last year.

Both the Samsung Galaxy S9 and Galaxy S9+ are similar to one another with very few key changes. Other than its larger screen, the Galaxy S9+ offers a larger 3,500 mAh battery compared to the S9’s 3,000 mAh capacity. The bigger Galaxy S9+ also includes a dual camera similar to that of the Note 8, and houses 6GB of RAM versus the S9’s 4GB of RAM. The Galaxy S9 and S9+ will both run on Qualcomm’s Snapdragon 845 processor.

On the surface, the Galaxy S9 is a smart and safe move for the South Korean electronics giant. It’s evidence that Samsung is sticking with what works rather than loading its phones with gimmicky new features and redesigns for the sake of change. But in a broader sense, the Galaxy S9 proves that some of the most compelling new features on smartphones are found in the camera. Nearly all of the S9’s biggest changes center on the camera, even those that aren’t specifically tied to photography or videography, such as Bixby’s new smarts and its attempt at making emojis more realistic. Given the tech world’s excitement over camera-based features like augmented reality, it’s a safe bet this trend will only continue. 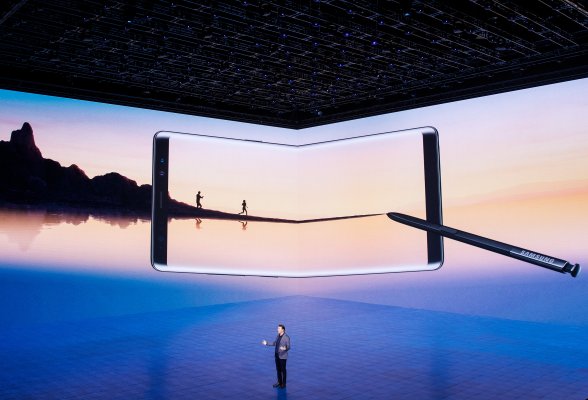 Everything We Know About the Samsung Galaxy S9 So Far, From Rumors to Release Date
Next Up: Editor's Pick