There’s a True Story Behind Black Panther’s Strong Women. Here’s Why That Matters

When Black Panther opened last weekend to record-breaking box office success, many of the viewers driving the film to that achievement were female moviegoers, who made up 45% of the audience. Though that number may defy conventional wisdom about superhero movies, it’s not so surprising given the actual plot of the movie. After all, as the University of Pennsylvania’s Salamishah Tillet noted for The Hollywood Reporter, the movie doesn’t just pass the Bechdel test — a measure of the substantiality of a film’s female characters — but “those scenes in which two or more women are talking to, disagreeing with, or fighting alongside each other without a man present are some of the movie’s most riveting ones.”

But the strong women of Black Panther are more than just a potential inspiration to women in the audience today. They’re also a window into a true, if oft-forgotten, piece of history.

In the film, the fictional Dora Milaje — “adored ones,” an all-female military group that protects the King and the fictional nation of Wakanda — are perhaps the most obvious example of female strength. The Dora Milaje were introduced in Black Panther comic by Christopher Priest, who took over as lead writer of the series in 1998; since the series’ relaunch in 2016, they’ve become much more central to the plot. (The title character, who was Marvel’s first African-American superhero, was created in 1966.) In their initial appearance, Priest’s narrator describes the female bodyguards as “Deadly Amazonian high school karate chicks,” who were also the King’s “wives-in training.” While many have speculated about the inspiration behind these warriors, it is clear that one of their main antecedents was the famous all-female African military corps of Dahomey, West Africa (now The Republic of Benin), whom the French dubbed “Dahomey Amazons” after female warriors in Greek mythology.

Some experts believe that the first such regiment, which emerged sometime in the 17th century, comprised hunters called gbeto, while others contend they were recruited from among the King’s many wives. As Sylvia Serbin describes in The Women Soldiers of Dahomey, these warriors can be difficult to categorize, as their names were based on a woman’s weapons expertise and unit to which she was assigned. Whatever their origin, the King was always surrounded by armed women in public and private life. By the end of the 19th century an estimated 4,000 women, many of whom began their training as teens, were among the Dahomey military ranks. In times of war, during the transatlantic slave trade and in the fight against French colonialism, Dahomey female warriors “were the last line of defense between the enemy and the King,” writes Serbin, “and were prepared to sacrifice their lives to protect him.”

Not only is this history clearly reflected in the fictionalized Wakanda, where Black Panther is set, but so is the idea of a political system wherein men and women control political institutions jointly. Though the nation has a King, he depends on the central female characters, played by Angela Bassett (mother/adviser to the King), Letitia Wright (Princess/lead scientist), Lupita Nyong’o (spy/insurrectionist), and Danai Gurira (adviser to the King/General of Dora Milaje). As numerous Africianist historians have attested, this system also shows up in the true history of pre-colonial African reality. For example, John Henrik Clarke explained in his essay on African Warrior Queens in Black Women of Antiquity, in the years before colonialism, “Africans had produced a way of life where men were secure enough to let women advance as far as their talents would take them.”

European societies of the time were constructed differently, and men believed women were not intellectually capable of making political decisions. Even so, European women were viewed as virtuously superior to their foreign female counterparts. Consequently, notions of black female innate inferiority led to the creation of stereotypes — what scholars Patricia Morton and Patricia Hill Collins have called “disfigured images” and “controlling images,” respectively — that were used to justify oppression.

From slavery to the present, black women have had to contend with four major stereotypes, which Collins identified in her classic book Black Feminist Thought. First, the Jezebel, the hyper-sexual woman who sought to corrupt the good morals of white men. Second, the Mammy, the dutiful caretaker who insured that everyone, white and black, adhered to the tenets of white supremacy. Third, the Matriarch, an ultra-domineering woman who terrorized her children and castrated her male partner. And fourth, the Welfare Mother (an update of the Jezebel), a woman with no work ethic or sexual morals, who has multiple children just to receive government assistance.

Notably absent among those stereotypes is the idea of the righteous warrior.

The Dora Milaje aren’t the only way in which Black Panther brings pre-colonial African ideas into modernity. As Nathan Connolly has written for The Hollywood Reporter, the movie contends with five centuries of imagining a world without a history of “environmental degradation, colonialism, cultural genocide or the elevation of white aesthetics to the exclusion of all else.”

Part of the real work of creating such a world must begin with moving black women, in the words of bell hooks, “from margin to center,” and creating an aesthetics that challenges, refutes and destroys those stereotypical concepts of black womanhood.

The importance of this achievement cannot be overstated. For black women and girls the world over, Wakanda represents a fictional world in which their natural beauty and intelligence are accepted norms of a society that values and affirms both their femininity and humanity. How much more significant, then, to know that this vision is based on reality. 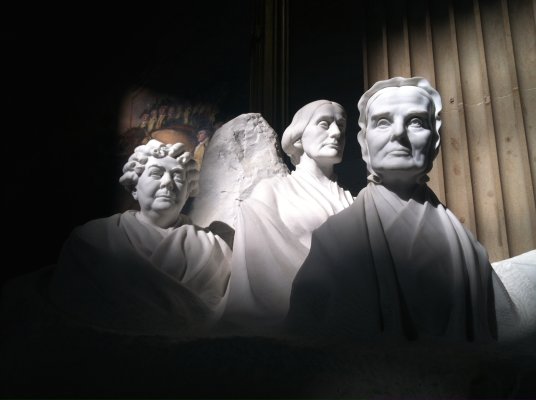 What We Can Still Learn From the Women's Suffrage Statue at the U.S. Capitol Rotunda
Next Up: Editor's Pick