Today’s automotive industry is evolving at a blistering pace. In the not-too-distant future our streets could be filled with self-driving cars powered by electricity. Technology is innovating rapidly, and entirely new models for mobility and transportation services are being explored every day. For a 114-year old company, it’s both exciting, and a little unnerving.

While I’m extremely proud of everything happening at Ford Motor Company and in our industry, my focus – and passion – has nothing to do with new engines or the latest vehicle sensors. My goal is simple: to make Ford’s vehicles with as many renewable materials as possible. My team and I look for bio and plant-based waste streams and literally turn this waste into car parts. After decades of research, we’ve accomplished some pretty remarkable innovations. But the road to a more sustainable vehicle hasn’t always been easy.

I often get asked why the work I do is so important to me. I was raised by the ultimate environmentalist. My dad was a World War II veteran – a Depression-era kid. He was the king of reuse, reduce and recycle. He didn’t throw anything away until it was completely exhausted. It was just the way I was brought up. I can’t see an item – even a waste stream – without seeing the value in it. Even if I don’t have any need for it, I’ll find somebody who does.

In high school, my chemistry teacher – who I still keep in touch with today – saw talent in me where I did not at the time. He’s a big reason why I went in to chemical engineering, especially at a time where very, very few women were entering such fields. That education path, coupled with my dad’s ‘no waste’ mantra, paved the way for my work at Ford, and it all started with a seed of an idea.

A lot of people are familiar with soy – tens of millions of consumers eat and drink it every day. But what might come as a surprise is that many of us actually sit on recycled soy all of the time. This year marks 11 years since Ford first used soybean-based foam in the 2008 Mustang, and since 2011, it’s been a key material used in the seat cushions, seat backs and headrests of every vehicle we build in North America.

Now, more than 18.5 million vehicles and half a trillion soybeans later, we’ve saved more than 228 million pounds of carbon dioxide from entering the atmosphere. This is the power of using renewable materials – what comes out of a car’s tailpipe is just one part of the sustainability equation.

But just bringing the idea to market in the first place was a real challenge. The first foams my team and I developed using soy as an alternative to petroleum were disastrous. But we didn’t give up. After long months in the lab, we eventually figured out how to improve the formulations, rebalance the chemistries and remove odorous compounds. Ironically, my next hurdle wasn’t a technical one, but resided in convincing the company to implement our new soy foam seats.

Just 11 years ago, the world was a different place. To give you an idea – a newly invented iPhone was about to launch, George W. Bush was president of the United States, and oil and gas were coming off years of low  prices. In fact, when I started thinking about this type of work in the early 2000s, gas prices across the U.S. were below $1.50 per gallon.

Not many executives at Ford (and across the business world) saw financial gain in being green at the time, so convincing suppliers that soy foam was the material of the future wasn’t easy. But in 2008, when oil costs skyrocketed and gas approached $4.00 per gallon, then the value of soy foam suddenly became obvious.

I like to tell my colleagues, and the students that I regularly present to, that for years while trying to pitch my ideas of a more sustainable vehicle, I was kicked out of every meeting room in the company. Meaningful change doesn’t come easy, and often takes some serious perseverance. At times, I worried our breakthroughs would forever live on the shelf of our laboratory, but that thought drove my team and I to fight even harder.

Eventually, we got the support of our executive chairman, Bill Ford. Even in economic downturns, he was instrumental in keeping us funded, and that investment has paid off today in our industry-leading use of sustainable materials. We finally had a champion to help convince the company that not only was replacing petroleum-based polyol good for the environment, it was good for business.

Building on our success with soy foam, we began to develop other renewable materials to incorporate into our vehicles, which in turn further helped us reduce greenhouse gas emissions. In some cases, the material allowed for weight reductions as well, leading to improved fuel economy for many of our vehicles.

Today, we are proud to feature nine sustainable materials in our production vehicles  – soy, wheat, rice, castor, kenaf (hibiscus), tree cellulose, jute and coconut. As we continue to experiment, the list of renewable resources we are researching reads like an entire farm – tomato peels, bamboo, agave fiber, dandelions and even algae. We’re also exploring innovative uses of carbon itself, and are first in the industry to develop foams and plastics using captured carbon dioxide. This is the type of innovative work I’m proud to say my team does every single day at Ford.

Soy was only the beginning of our journey with sustainable materials. The next 10 years promise even more radical research and revolutionary innovation, underpinned by responsible investment and pioneering vision. Ford intends to remain the industry leader in the use of sustainable materials as we move into a future that’s guaranteed to be exciting. And now, I’m no longer getting kicked out of meeting rooms, but instead being asked to present on how we can make our vehicles – and this world – more sustainable. 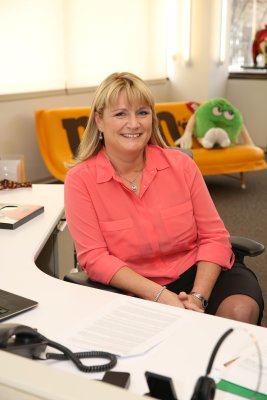 The Boss: Mars Wrigley President Tracey Massey Is Proof That It's Possible to Move Up in Your Company
Next Up: Editor's Pick