'Bring on Sweden.' Team USA Is Headed to the Curling Gold Medal Match After a Stunning Upset Against Canada

The U.S. men’s curling team had just clinched the most important win in its history, with a 5-3 score over favored Canada, in the Olympic tournament semifinals, Thursday at the 2018 Winter Olympics. With the gold medal match against top-ranked Sweden still awaiting on Saturday, would American curler Matt Hamilton have time to celebrate his outstanding match?

“Absolutely,” says Hamilton. “I think it’s healthy to celebrate a little bit of a win. I’m going to go back to the village and have a McFlurry.”

In a different era, you might expect the stereotypical curling response to that question: We’ll go out and have a few beers. But this is the new U.S. men’s curing team, one that stresses fitness and accountability. Hours after the U.S. women’s hockey team won a thrilling gold medal game against Canada, America continued to beat its northern neighbor in its favorite pastimes.

No U.S. curling team has ever reached an Olympic gold medal game. With the last weekend of the Olympics lacking marquee events in which American athletes are favored to medal, fans should consider latching on to the curling team as it seeks to upset the powerful Swedes. (The curling gold medal game, unfortunately for some fans, will air live at 3 a.m. ET on NBCSN. Set your DVRs, or avoid spoilers and watch the gold medal match rebroadcast later in the day.)

Team USA will go on to play Sweden for the curling gold medal after beating Canada.
Dean Mouhtaropoulos—Getty Images

The Americans essentially wrapped up the curling semifinals match in the eighth end — the curling equivalent of a baseball inning — when Canada skip Kevin Koe left a shot well short of the house, or the dartboard-looking scoring area. The Americans picked up two key points and held on for the upset win. The Canadian men had won the last three Olympic gold medals; the women also won in Sochi. Neither will win gold in PyeongChang.

Afterward the game, Canadian vice-skip Marc Kennedy asked that his fellow citizens avoid falling into a depression. “We’re not going to die, the sun will come up,” says Kennedy. What explained the loss? “It’s a really f—king hard game at this level,” he says. (Hey, it’s the Olympics. Kennedy soon apologized for dropping the F-bomb). In curling, the world’s catching up to Canada. “This is the new normal for Canada,” Kennedy says. “We have to get used to it.”

John Shuster, the American skip — or captain who calls the shots — was widely derided for his lackluster 2010 performance in Vancouver, where the U.S. finished last. He didn’t fare much better in Sochi; the Americans finished next-to-last in 2014. But Shuster has shed 30 pounds since Sochi. In the last end against Canada, he needed to knock a Canadian stone out of the middle of the house to clinch the victory. His son Luke, 4, told him he could do it from the crowd. As the stone slid down the sheet, Shuster started celebrating. He knew his line was good.

A man waves an American flag during the curling men's semi-final game between Canada and USA during the Pyeongchang 2018 Winter Olympic Games at the Gangneung Curling Centre in Gangneung on February 22, 2018.
WANG ZHAO—AFP/Getty Images

The U.S. started 2-4 in the tournament, seemingly destined for another disappointment. But a win over Canada in the preliminary round put the Americans on a proper path. “I mean, come on, it’s the Olympics,” says Shuster. “Who’s going to give up hope?”

Shuster says the U.S. women’s hockey win earlier on Thursday inspired his team. Those players “showed us that, you know, anything is possible,” Shuster says. Now there’s just one game left to win. The curlers are feeling it. Says U.S. curler John Landsteiner: “Bring on Sweden.” 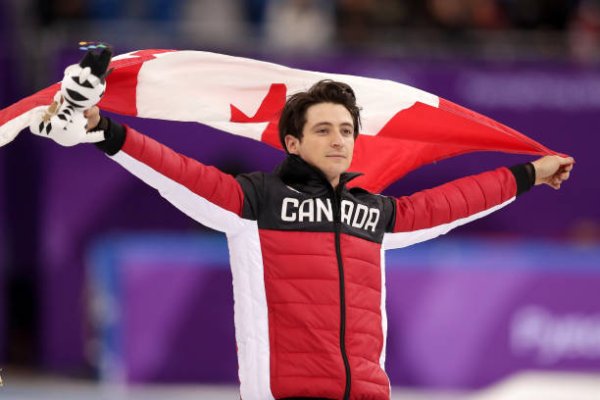 Scott Moir Cheering on Canada at the Women's Hockey Final Is the Funniest Meme of the Olympics
Next Up: Editor's Pick